Théodelinde Bourcin-Dubouché, known commonly as Marie-Thérèse of the Heart of Jesus (French : Marie-Thérèse du Cœur de Jésus) (2 May 1809, Montauban – 30 August 1863, Paris), was a Roman Catholic French nun, artist, and founder of the Sisters of Adoration in Paris, France. The cause for her canonization has been formally accepted by the Holy See, and thus she has been declared "venerable".

She was born in 1809 in the city of Montauban, Tarn-et-Garonne, the daughter of Jean-Baptiste Bourcin du Bouché, Sieur of Bouchet, (1772-1852), a high government official who served at that time as a Treasurer General of the First French Republic, and of Marie Élisabeth Carlotta Marini. The family was not religious, but rather enthusiasts of the arts. A nephew, Adrien Dubouché (1818-1881), later became a major collector of ceramics, whose contributions became the nucleus of the Musée national Adrien-Dubouché in Limoges.

In this environment, Dubouché's artistic skills were encouraged and in 1833 she moved to Paris and began formal studies in the studio of François-Louis Dejuinne, who was known for his historical and religious paintings. She threw herself into her painting, spending eight to ten hours daily in the studio, producing primarily works with religious themes. At the same time, she regularly participated in the social life of Parisian society, frequently attending concerts, the theater and gatherings of literary societies, where she was noted for her high spirits and enthusiasm.

In following her craft, however, Dubouché slowly developed an awareness of the suffering of people around her, especially the poor, which was leading her to a deeper love of Jesus Christ. In 1846, while in prayer at the Cathedral of Notre Dame, she experienced the first of several mystical visions which occurred until 1848 and were to effect the direction of her life. The first was a vision of the Blessed Sacrament. On February 25, 1847, she had a vision of Christ crowned with thorns, his head covered with a veil, who spoke to her. She then painted this vision.

Feeling that she had received a call from God to a more exacting form of spiritual life, Dubouché and her father were allowed to take up residence in an outlying building of the Monastery of the Discalced Carmelite nuns in Paris (then located on a portion of their original cloister in the Faubourg Saint-Jacques) with the intention of entering the monastery. Shortly after this move, the uprisings of the Revolution of 1848 started, in the course of which many attacks on Catholic Church began, including the murder of Denis Auguste Affre, the Archbishop of Paris. Inspired by the spiritual revelations given to the Carmelite nun Marie of St Peter shortly before that, Bouché organized a period of forty days of prayer held in the chapel of the Carmelite friars on Place Denfert-Rochereau in order to atone for the blasphemies then taking place, in which some 2,000 people took part.

During the night of June 29, 1848, which she was spending in adoration of the Blessed Sacrament in the friars' chapel, Dubouché had her final vision of Christ. This time he appeared to her on the altar of the monastery's chapel. In this vision he asked that she offer worship and reparation for the damages to the Church which were then taking place as part of a religious community. She shared this vision with the prioress of her intended monastery, Mother Isabelle, who suggested that Dubouché found a community of Third Order Carmelites, both religious and seculars, vowed to those ends.

Eight young women were found who felt called to share in this proposed way of life. With them, on August 6, 1848, Dubouché began a canonical novitiate, establishing the new community of Religious Sisters and secular tertiaries. At that point she assumed the religious name of Marie-Thérèse of the Heart of Jesus. The Sisters then took over the former Ursuline monastery which had been closed by the French Revolution, at what was then Rue des Ursulines, now 39 Rue Gay-Lussac. The small community received the formal approval of the new archbishop, Marie-Dominique-Auguste Sibour, in February 1849. Dubouché professed her initial religious vows on May 29 of that year and on June 13 received thirteen Sisters into the novitiate of the new congregation. The congregation was granted the Decretum laudis (Decree of Praise), giving conditional recognition of the community, by Pope Pius IX in 1853, achieving full papal approval under Pope Leo XIII in 1887.

In November 1855, a fire broke out in the chapel of the convent. Dubouché attempted to save the Blessed Sacrament from the tabernacle on the altar. She was badly burned in this attempt, which resulted in lifelong pain and depression. Nevertheless, she and the four remaining members of the original community made their perpetual profession of vows on February 10, 1859.

Worn out by her injuries and efforts, Dubouché died on August 30, 1863. By the end of her life, she had founded daughter communities of her foundation in two other cities of France. Six months later, her remains were transferred to the crypt of the convent.

About 1870, a cause was opened by the Archdiocese of Paris to seek Dubouché's canonization. After decades of a study of her life, the case was sent to the Holy See, which accepted the case. Pope Pius X issued a recognition of her being a person of heroic virtue on March 19, 1913, whereby she was accorded the title of "Venerable".

By 2019, the congregation Dubouché had founded consisted of twenty Religious Sisters, located in three communities: the original motherhouse in Paris and two monastic communities in Ireland. Of them, the four candidates to the congregation were dismissed in September of that year as it had been determined that it was deemed no longer viable as an religious community. [1] The chapel of the motherhouse was closed that same month for renovations. As of March 2020, an announcement was made that it would remain closed indefinitely while the future of the congregation is determined. [2] 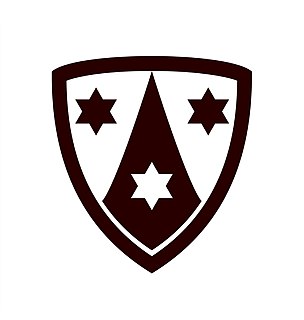 The Carmelite Order, officially known as the Order of the Brothers of the Blessed Virgin Mary of Mount Carmel Ancient Observance/Calced Carmelites or sometimes simply as Carmel by synecdoche, is a Roman Catholic mendicant religious order for men and women. Historical records about its origin remain very uncertain, but it was probably founded in the 12th century on Mount Carmel in the Crusader States. Berthold of Calabria has traditionally been associated with the founding of the order, but few clear records of early Carmelite history have survived. The order of Carmelite nuns was formalised in 1452.

Peter Coudrin or Pierre Coudrin of France was the founder of the Congregation of the Sacred Hearts of Jesus and Mary, a religious institute of the Roman Catholic Church famous for its missionary work in Hawaii, Africa, Europe, Central America and the Pacific Islands.

Madeleine Sophie Barat, R.S.C.J. is a French saint of the Catholic Church and was the founder of the Society of the Sacred Heart, a worldwide religious institute of educators.

Margaret Mary Alacoque, was a French Roman Catholic Visitation nun and mystic, who promoted devotion to the Sacred Heart of Jesus in its modern form.

Peter Julian Eymard was a French Catholic priest and founder of two religious institutes: the Congregation of the Blessed Sacrament for men and the Servants of the Blessed Sacrament for women. Eymard entered the novitiate of the Oblates of Mary Immaculate in June 1829. His first attempt as a seminarian ended because of serious illness. Throughout his life, Eymard suffered from poor health, particularly ‘weakness of the lungs’ and migraine headaches.

Jeanne Chézard de Matel was a French mystic who founded the Order of the Incarnate Word and Blessed Sacrament, whose rule and constitution were approved in 1633 with the principal objective of youth education.

Venerable Leo Dupont, also known as "The Holy Man of Tours," or the "Apostle of the Holy Face", was a Catholic who helped spread various Catholic devotions such as that of the Holy Face of Jesus and nightly Eucharistic Adoration. He was declared Venerable by the Holy See during Pope Pius XII's Pontificate and has been awaiting Beatification since 1939.

Servants of the Most Blessed Sacrament is a Roman Catholic religious institute of women, founded by the Venerable Pierre-Julien Eymard in 1858, assisted by Mother Margaret of the Blessed Sacrament, with the authorization of Mgr Morlot, Archbishop of Paris. 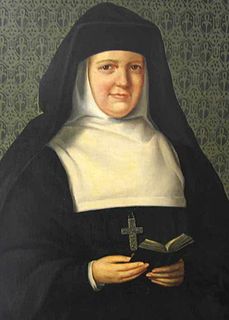 Margaret of the Blessed Sacrament, O.C.D., was a French Discalced Carmelite nun. She was the second daughter of Madame Acarie, the Blessed Marie of the Incarnation, who introduced the Reform of the Carmelite Order into France.

Ana de Jesús, translated into English as Anne of Jesus, was a Spanish Discalced Carmelite nun and writer. She was a close companion of Teresa of Avila, foundress of the Carmelite reform and served to establish new monasteries of the Order throughout Europe. Known as a mystic and for her writings on prayer, she has been declared Venerable by the Catholic Church.

The Adorers of the Sacred Heart of Jesus of Montmartre, OSB is a Catholic order of Benedictine nuns, often known as Tyburn Nuns. The order was founded in Paris but later moved to a new Mother House in London and established additional monasteries in nine other countries. Nuns at the London monastery practice Perpetual Adoration of the Blessed Sacrament and maintain a Martyrs' Shrine dedicated to the Catholic Martyrs of the English Reformation. 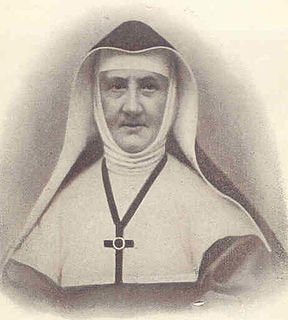 Jeanne Haze - in religious Marie-Thérèse of the Sacred Heart of Jesus - was a Belgian Roman Catholic professed religious and the foundress of the Daughters of the Cross. Haze decided to respond to the lack of education in her homeland in the chaos resulting from the French Revolution and made that the focus of her religious apostolate; she served as her order's Superior General from its founding until her death.

Alix Le Clerc, known as Mother Alix, was the founder of the Canonesses of St. Augustine of the Congregation of Our Lady, a religious order founded to provide education to girls, especially those living in poverty. They opened Schools of Our Lady throughout Europe. Offshoots of this order brought its mission and spirit around the globe. Let Clerc was beatified by the Catholic Church in 1947.

The Sisters of Mary Reparatrix are a religious institute of women in the Catholic Church which was founded in France in 1857. Their way of life has been to combine adoration of God with the evangelization of society, especially for women. 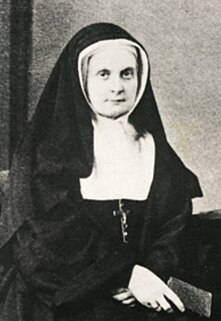 Sophie-Thérèse de Soubiran La LouvièreFrench pronunciation: ​[maʁi teʁɛz d subiʁã la luvjɛʁ] was a French Roman Catholic nun who established the Sisters of Marie-Auxiliatrice. She adopted the name of Marie of the Sacred Heart in 1877 after she had become a nun. 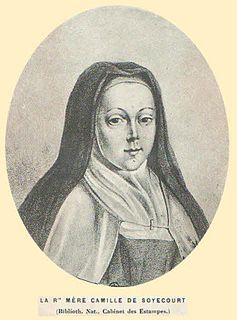 Camille de Soyécourt (1757–1849) or Thérèse-Camille de l'Enfant-Jésus was a wealthy heiress and French Catholic nun who restored the Carmelite Order in France after the French Revolution. 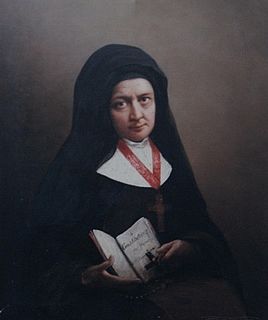 The Sisters of Adoration, in full the Sisters of Reparative Adoration are a Catholic enclosed religious order of women that follows the religious rule of the Discalced Carmelite Order, established in 1848 by Théodelinde Bourcin-Dubouché. They are dedicated to perpetual adoration of the Blessed Sacrament and to reparation to God for the sins of the world. To this end, they serve to help deepen the faith of laywomen though conducting spiritual retreats in their monasteries.