Théodore-Gérard Hanssen, best known under the name Théo Hanssen (10 August 1885, Wonck - 29 May 1957, Roanne) was a Belgian stained glass artist mainly active in France. His windows include some of those at Notre-Dame de la Trinité Basilica in Blois. He also painted in oils and watercolour, worked in enamel and designed church vestments, as well as being an amateur musician.

He is considered as one of the main revivers of glass-making techniques, alongside Louis Barillet and Jacques Le Chevallier, with whom he worked in Paris between 1920 and 1940 as collaborators at the Atelier Barillet. He moved to Roanne during World War II and there taught Pierre Étaix. 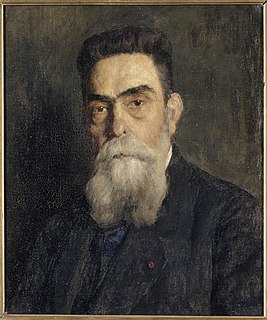 Jean René Bazaine was a French painter, designer of stained glass windows and writer. He was the great great grandson of the English Court portraitist Sir George Hayter.

Breach is a 2007 American spy thriller film directed by Billy Ray, who wrote the screenplay with Adam Mazer and William Rotko. The film is based on the true story of Robert Hanssen, an FBI agent convicted of spying for the Soviet Union and later Russia for more than two decades. It stars Chris Cooper as Hanssen and Ryan Phillippe as Eric O'Neill, the FBI agent who helped bring about his downfall. The film received generally positive reviews and grossed $41 million on a $23 million budget.

Pierre Étaix was a French clown, comedian and filmmaker. Étaix made a series of short- and feature-length films, many of them co-written by influential screenwriter Jean-Claude Carrière. He won an Academy Award for best live action short film in 1963. Due to a legal dispute with a distribution company, his films were unavailable from the 1970s until 2009. 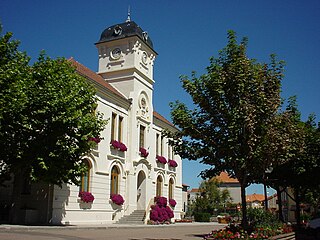 Renaison is a commune in the Loire department of central France. 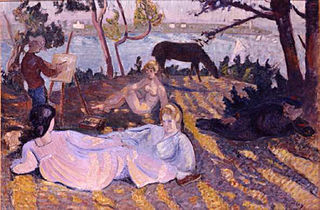 Louis Barillet was a French artist, known for his work in stained glass. Among those with whom he collaborated were Théodore-Gérard Hanssen and Jacques Le Chevallier. His windows may be seen in the church of Notre-Dame-des-Missions-du-cygne d'Enghien.

Jacques Le Chevallier was a French glassmaker, decorative artist, illustrator, and engraver. He was mobilized during World War I; after the war he became a master artisan in the studio of Louis Barillet, with whom he remained until 1945. His collaborators there included Théodore-Gérard Hanssen. 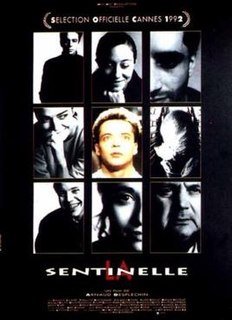 The Sentinel is a 1992 French thriller film, directed by Arnaud Desplechin. It was entered into the 1992 Cannes Film Festival.

Piscine Molitor is a swimming pool and hotel complex located in Porte Molitor, 16th arrondissement of Paris, Île-de-France, Paris, France. It is next to the Bois de Boulogne park, and between Stade Roland Garros and Parc des Princes. The complex was built in 1929 and inaugurated by Olympic swimmers Aileen Riggin, Matthew Gauntlett and Johnny Weissmuller. The pool is known for its Art Deco designs and the popular introduction of the bikini by Louis Réard on 5 July 1946.

François Lesage was a French couture embroiderer. Lesage was globally known in the art of embroidery and worked for the largest fashion and haute couture houses. His atelier is now part of Chanel through the company's subsidiary, Paraffection. 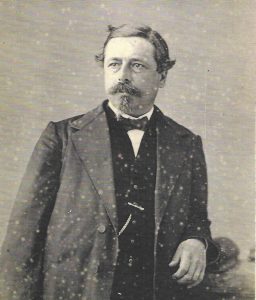 Jean-Pierre Barillet-Deschamps was a French horticulturist and landscape architect. He was the chief gardener of Paris during the reign of Emperîor Napoleon III, and was responsible for planting the great gardens of the French Second Empire; the Bois de Boulogne, the Bois de Vincennes, Parc Montsouris, Parc des Buttes-Chaumont, the remaking of the Luxembourg Garden, and many smaller Parisian parks and gardens. He was also responsible for planting trees along the new boulevards of Paris. His landscape gardens, with their lakes, winding paths, sloping lawns, groves of exotic trees and flower beds, had a large influence on public parks throughout Europe and in the United States.

Saint-Esprit is a Roman Catholic church in the 12th arrondissement of Paris, France, in the southeast of the city. It was built in 1928–35. The Church has a very large reinforced concrete dome, unusual for the period. The interior is richly decorated by contemporary artists of the Ateliers d'Art Sacré.

Notre-Dame de la Trinité Basilica is a Roman Catholic basilica church located in Blois, in the Loir-et-Cher department of France. It is dedicated to the Our Lady of the Trinity. 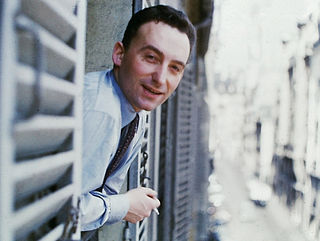 Pierre Barillet was a French playwright. 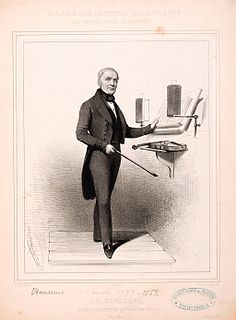 Charles-Louis-Joseph Hanssens, known under the name Hanssens the elder, was a Belgian violinist, composer, conductor and theatre director.

Jacques Houplain was a French painter and engraver.