Théodore Année was a French horticulturist. He was a wealthy diplomatic consul in South America when he retired to France in the mid-1840s and settled in rue des Réservoirs, Passy, Paris, where he devoted himself to the culture of tropical plants from South America, having brought back with him the taste for plants with beautiful foliage, especially the Canna genus. [1] [2] [3] [4] [5] [6]

At that time in Europe, Canna species (common name cannas) were confined to botanical gardens, cultivated in greenhouses, and their custodians hardly dared to expose them to the open air, because of their tropical origins. [1]

In 1846, Année, who had brought back from South America a collection of Canna species seed, trialed a solid mass of them in open ground. The main two species he trialed were C. indica and C. glauca (or C. nepalansis). The manner in which they flourished under the northern temperate climate of Passy exceeded his expectations. They flowered abundantly, which allowed him to try the first artificial pollination made on the Canna genus. He applied pollen from C. glauca onto C. indica, and the offspring of this crossing first flowered for Année in 1848. The resulting F1 hybrid was called Canna 'Annei'. [1] [2] [3] [4] [5] [6]

Année then spent the next six years bulking up the new hybrid until he was ready to introduce it to an amazed Parisian public. The popularity of cannas was such that 20,000 tufts of 'Annei' were said to be used in displays in Paris in 1861. He was rapidly joined by many other enthusiasts and professional horticulturists, as Canna hybrids enjoyed rapid popularity in France, and later the rest of Europe and North America. [5] Amongst the professionals was rose breeder Pierre-Antoine-Marie Crozy of Avoux & Crozy, La Guillotière, Lyon, France, who first started hybridizing cannas in 1862, [1] and who went on to become the greatest of Canna hybridists. [1] [2] [3] [4] [5] [6]

Chaté, the author of Le Canna, stated of Année that he was, "A happy, skilful hybridiser, he operated on a great scale, thus became the creator of all the most beautiful varieties of the floral trade. All the amateurs and horticulturists who occupied themselves with foliage plants visited his garden, which he filled up each year with seedlings of canna[s]. We (the firm of Chaté et fils) owe him the majority of our successes. Thanks to his councils and his friendship, we delivered to the trade so great a number of canna innovations, and which enabled us to write this work." [1]

Année then spent the next 20 years creating many more cultivars, until retiring to Nice, in southern France, in 1866. Fittingly, his last Canna cultivar was named C. 'Prémices de Nice'. [1] [2]

Canna or canna lily is the only genus of flowering plants in the family Cannaceae, consisting of 10 species. Cannas are not true lilies, but have been assigned by the APG II system of 2003 to the order Zingiberales in the monocot clade Commelinids, together with their closest relatives, the gingers, spiral gingers, bananas, arrowroots, heliconias, and birds of paradise.

Lagerstroemia, commonly known as crape myrtle, is a genus of around 50 species of deciduous and evergreen trees and shrubs native to the Indian subcontinent, southeast Asia, northern Australia, and parts of Oceania, cultivated in warmer climates around the world. It is a member of the family Lythraceae, which is also known as the loosestrife family. The genus is named after Swedish merchant Magnus von Lagerström, a director of the Swedish East India Company, who supplied Carl Linnaeus with plants he collected. These flowering trees are beautifully colored and are often planted both privately and commercially as ornamentals. 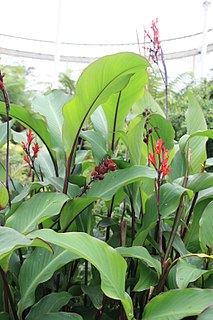 Canna indica, commonly known as Indian shot, African arrowroot, edible canna, purple arrowroot, Sierra Leone arrowroot, is a plant species in the family Cannaceae. It is native to much of South America, Central America, the West Indies, and Mexico. It is also naturalized in the southeastern United States, and much of Europe, sub-Saharan Africa, Southeast Asia, and Oceania. Canna indica has been a minor food crop cultivated by indigenous peoples of the Americas for thousands of years. 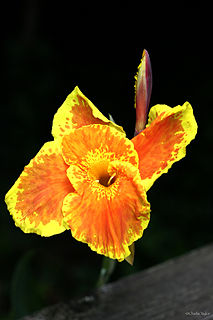 Canna 'Phasion' is a medium sized Italian Group cultivar; green, bronze and pink variegated foliage, ovoid shaped, branching habit; oval stems, coloured red; clusters of flowers are open, tangerine-orange and burnt-red, staminodes are large, edges frilled, petals purple with farina, fully self-cleaning; seed is sterile, pollen is sterile; rhizomes are thick, up to 3 cm in diameter, coloured white and purple; tillering is average. Originally a spontaneous mutation, probably of Canna 'Wyoming', as it has been known to revert its foliage colour to that identical to that old cultivar. Sold in the US and elsewhere as Canna Tropicanna®, it was protected under US Plant Patent #10,569. Because the patent was issue on 1998-08-25, it has now expired and propagation is now allowed. The plant can be sold under its cultivar name Phasion. 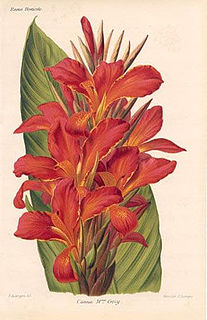 Canna 'Madame Crozy' is a medium-sized 'Crozy Group' canna cultivar; green foliage, large, ovoid shaped, branching habit; oval stems, coloured red; spikes of flowers are open, scarlet with a narrow gold margin, throat gold with vermilion spots, staminodes are medium size, edges regular, petals red, fully self-cleaning; fertile both ways, not true to type, self-pollinating; rhizomes are thick, up to 3 cm in diameter, coloured purple; tillering is prolific. It was introduced by A. Crozy, Lyon, France in 1890 and was named in honour of his wife. It was awarded the RHS Award of Garden Merit (AGM), in 1890.

Carl Ludwig Sprenger was a German botanist, born on 30 November 1846 at Güstrow, Mecklenburg and died 13 December 1917 on the island of Corfu (Kérkyra).

Canna 'Musaefolia' is a cultivar in to the Foliage Group of Cannas. The cultivar was first described in the first work devoted to Canna, Le Canna, authored by M. Chaté in 1867 with Monsieur Théodore Année. The Musaefolia members of the Foliage Group consist of a specimen that was accepted as a native species of Peru by the experts of the time and at least 7 hybrids and cultivars carrying that parentage. The original "species" was unique because it was without rhizomes, and required to be kept constantly growing. No such species is known to exist in this age, and leading authorities treat C. musaefolia as a synonym of C. paniculata.

Pierre Antoine Marie Crozy (1831-1903) [also called Crozy aîné—French for "elder"] was a nineteenth-century French rose breeder. He was a partner in the French firm, Avoux & Crozy, La Guillotière, Lyon, actively breeding roses from the 1850s to 1860s. From the early 1860s until his death in 1903 he was also hybridising Canna species, and introduced many hundreds of new cultivars. The largest Canna Group today is still called the Crozy Group, and many of those cultivars are still being raised.

The Canna Agriculture Group contains all of the varieties of Canna used in agriculture. Canna achira and Canna edulis are generic terms used in South America to describe the cannas that have been selectively bred for agricultural purposes, normally derived from C. discolor. It is grown especially for its edible rootstock from which starch is obtained, but the leaves and young seed are also edible, and achira was once a staple foodcrop in Peru and Ecuador. 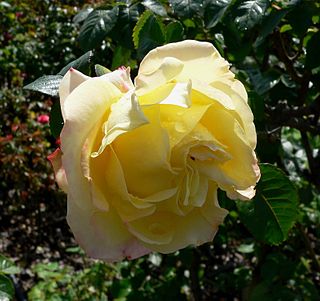 Garden roses are predominantly hybrid roses that are grown as ornamental plants in private or public gardens. They are one of the most popular and widely cultivated groups of flowering plants, especially in temperate climates. Numerous cultivars have been produced, especially over the last two centuries, though roses have been known in the garden for millennia beforehand. While most garden roses are grown for their flowers, some are also valued for other reasons, such as having ornamental fruit, providing ground cover, or for hedging.