He belonged to a family of map engravers which had long been connected with the war department, and spent nine years in that service himself. The success of a vaudeville he had performed at the Beaumarchais and which was immediately snapped up for the repertory of the Palais Royal, showed him his real vocation. During the next thirty years he signed, alone or in collaboration, over a hundred plays; among the most successful were: 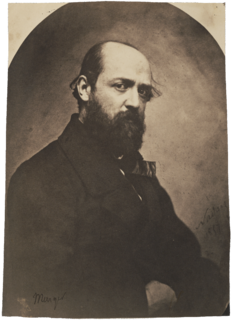 Louis-Henri Murger, also known as Henri Murger and Henry Murger was a French novelist and poet.

Charles Selby was a 19th-century English actor and playwright, and translator of many French plays.

Victorien Sardou was a French dramatist. He is best remembered today for his development, along with Eugène Scribe, of the well-made play. He also wrote several plays that were made into popular 19th-century operas such as La Tosca (1887) on which Giacomo Puccini's opera Tosca (1900) is based, and Fédora (1882) and Madame Sans-Gêne (1893) that provided the subjects for the lyrical dramas Fedora (1898) and Madame Sans-Gêne (1915) by Umberto Giordano.

Ahrweiler is a district in the north of Rhineland-Palatinate, Germany. It is bounded by the districts of Euskirchen, Rhein-Sieg and the city of Bonn in the state of North Rhine-Westphalia, and the districts of Neuwied, Mayen-Koblenz and Vulkaneifel.

The National Right to Life Committee (NRLC) is the oldest and largest national pro-life organization in the United States with affiliates in all 50 states and more than 3,000 local chapters nationwide. The organization, through legislative and educational activity, works against induced abortion, infanticide, and euthanasia and assisted suicide. 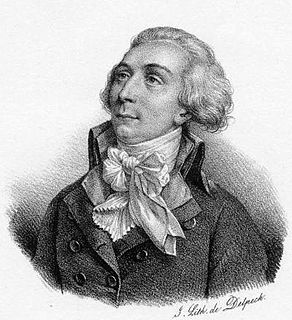 Auto-Destructive Art (ADA) is a form of art coined by Gustav Metzger, an artist born in Bavaria that moved to Britain in 1939. Taking place after World War II, Metzger wanted to showcase the destruction created from the war through his artwork. This movement took place in England and was launched by Metzger in 1959. This term was invented in the early 1960s and put into circulation by his article "Machine, Auto-Creative and Auto-Destructive Art" in the summer 1962 issue of the journal Ark. 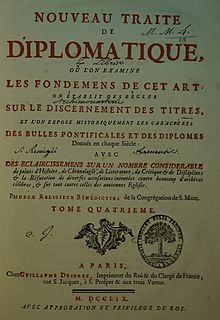 René-Prosper Tassin was a French historian, belonging to the Benedictine Congregation of Saint-Maur.

Jean-Baptiste Barrière was a French cellist and composer. He was born in Bordeaux and died in Paris, at 40 years of age.

Claire Huchet Bishop was a Swiss-born American children's writer and librarian. She wrote two Newbery Medal runners-up, Pancakes-Paris (1947) and All Alone (1953), and she won the Josette Frank Award for Twenty and Ten (1952). Her first English-language children's book became a classic: The Five Chinese Brothers, illustrated by Kurt Wiese and published in 1938, was named to the Lewis Carroll Shelf Award list in 1959.

The King's Daughter is a historical novel for young adult readers by Suzanne Martel, first published in 1974. It follows the life of Jeanne Chatel, one of the King's Daughters of New France in the seventeenth century.

Don M. Wilson III is an American banker with expertise in corporate banking, global capital markets, and risk management. He was appointed as the first chief risk officer at JPMorgan Chase & Co. in 2003 and retired in 2006. He began his career in the management training program at Chemical Bank in New York in 1973 and later held senior executive positions in New York, Tokyo, and London.

“One’s Self I Sing” is a poem by Walt Whitman, published in 1867 as the first poem for the final phase of Leaves of Grass. Although the general attitude towards the poem was not favorable, in July 1855 Whitman received the famous letter from Ralph Waldo Emerson in appreciation of his words of strength, freedom, and power, as well as, “meets the demand I am always making of what seemed the sterile and stingy Nature.”

Jeff Curro, also known as Jeff the Drunk and Jeff the Bore, is a member of the Wack Pack on The Howard Stern Show.

Sofía Bassi was a Mexican painter and writer noted for her surrealist work as well as her personal life, which included five years in prison for murder. She maintained an active career despite incarceration, painting her first mural in prison in Acapulco, with the assistance of Alberto Gironella, José Luis Cuevas, Rafael Coronel and Francisco Corzas. This mural can now be found at the municipal building of the city.

The Entertainment at Britain’s Burse is a masque written by Ben Jonson in 1609 and rediscovered in 1997. It was commissioned by Robert Cecil, 1st Earl of Salisbury, in celebration of the opening of the “New Exchange”. This masque was discovered by James Knowles and published in 1997. It is an unusual Johnson text because it seems to be in celebration of consumer culture while so many of his other plays and poems condemn it—though there might be some satire intended. There are essentially only three characters. Each character performs a rather lengthy monologue including two songs by the final actor.

Lucien Barrière was a French entrepreneur and businessman. He was the heir and founder of the Lucien Barrière group, one of the largest group of casinos, luxury hotels, resorts and restaurants.

Le Cheminant Watch Company is a brand that dates back to the first half of the 19th century. Originally a jeweller, it has since become principally a watch maker and, in the early 20th century, supplied chronometers and deck watches to the Royal Navy. Since the 1950s it has concentrated on watches and is currently based in Surrey, UK.

Linda Polach is an American news media executive. She is currently Managing Director of WGBH News for the WGBH Educational Foundation in Boston, Massachusetts, operator of WGBH-TV Channel 2 and its all-news radio station WGBH (FM) in Boston, Mass.

Adrien Decourcelle was a 19th-century French writer and playwright.