Théodore Chassériau (September 20, 1819 – October 8, 1856) was a Dominican-born French Romantic painter noted for his portraits, historical and religious paintings, allegorical murals, and Orientalist images inspired by his travels to Algeria. Early in his career he painted in a Neoclassical style close to that of his teacher Jean-Auguste-Dominique Ingres, but in his later works he was strongly influenced by the Romantic style of Eugène Delacroix. He was a prolific draftsman, and made a suite of prints to illustrate Shakespeare's Othello . The portrait he painted at the age of 15 of Prosper Marilhat, makes Théodore Chassériau the youngest painter exhibited at the Louvre museum. [1]

Chassériau was born in El Limón, Samaná, in the Spanish colony of Santo Domingo (now the Dominican Republic). [2] His father Benoît Chassériau was a French adventurer who had arrived in Santo Domingo in 1802 to take an administrative position in what was until 1808 a French colony. [3] Theodore's mother, Maria Magdalena Couret de la Blagniére, was the daughter of a mulatto landowner born in Saint-Domingue (now Haiti). In December 1820 the family left Santo Domingo for Paris, where the young Chassériau soon showed precocious drawing skill. He was accepted into the studio of Jean-Auguste-Dominique Ingres in 1830, at the age of eleven, and became the favorite pupil of the great classicist, who regarded him as his truest disciple. [4] (An account that may be apocryphal has Ingres declaring "Come, gentlemen, come see, this child will be the Napoleon of painting.") [5]

After Ingres left Paris in 1834 to become director of the French Academy in Rome, Chassériau fell under the influence of Eugène Delacroix, whose brand of painterly colorism was anathema to Ingres. Chassériau's art has often been characterized as an attempt to reconcile the classicism of Ingres with the romanticism of Delacroix. [6] He first exhibited at the Paris Salon in 1836, and was awarded a third-place medal in the category of history painting. [7] In 1840 Chassériau travelled to Rome and met with Ingres, whose bitterness at the direction his student's work was taking led to a decisive break. While in Italy, Chassériau made landscape sketches and studied Renaissance frescoes. [8]

Among the chief works of his early maturity are Susanna and the Elders and Venus Anadyomene (both 1839), Diana Surprised by Actaeon (1840), Andromeda Chained to the Rock by the Nereids (1840), and The Toilette of Esther (1841), all of which reveal a very personal ideal in depicting the female nude. [9] Chassériau's major religious paintings from these years, Christ on the Mount of Olives (a subject he treated in 1840 and again in 1844) and The Descent from the Cross (1842), received mixed reviews from the critics; among the artist's champions was Théophile Gautier. In 1843, Chassériau painted murals depicting the life of Saint Mary of Egypt in the Church of Saint-Merri in Paris, the first of several commissions he received to decorate public buildings in Paris. [8]

Portraits from this period include the Portrait of the Reverend Father Dominique Lacordaire, of the Order of the Predicant Friars (1840), and The Two Sisters (1843), which depicts Chassériau's sisters Adèle and Aline.

Throughout his life he was a prolific draftsman; his many portrait drawings executed with a finely pointed graphite pencil are close in style to those of Ingres. [10] He also created a body of 29 prints, including a group of eighteen etchings of subjects from Shakespeare's Othello in 1844. [11]

He exhibited the colossal portrait Ali-Ben-Hamet, Caliph of Constantine and Chief of the Haractas, Followed by his Escort in the Salon of 1845, where it received equivocal reviews. In 1846, Chassériau made his first trip to Algeria. From sketches made on this and subsequent trips he painted such subjects as Arab Chiefs Visiting Their Vassals and Jewish Women on a Balcony (both 1849, now in the Louvre). A major late work, The Tepidarium (1853, in the Musée d'Orsay), depicts a large group of women drying themselves after bathing, in an architectural setting inspired by the artist's trip in 1840 to Pompeii. His most monumental work was his decoration of the grand staircase of the Cour des Comptes, commissioned by the state in 1844 and completed in 1848. He followed the example of Delacroix in executing this work in oil on plaster, rather than in fresco. [8] This work was heavily damaged in May 1871 by a fire set during the Commune, and only fragments could be recovered; these are preserved in the Louvre.

After a period of ill health, exacerbated by his exhausting work on commissions for murals to decorate the Churches of Saint-Roch and Saint-Philippe-du-Roule, Chassériau died at the age of 37 in Paris, on October 8, 1856. He is buried in the Montmartre Cemetery.

His work had a significant impact on the style of Puvis de Chavannes and Gustave Moreau, and—through those artists' influence—reverberations in the work of Paul Gauguin and Henri Matisse. [12] There is in Paris a Society for the painter: Association des Amis de Théodore Chassériau.

Works of Chassériau are in the Musée du Louvre where a room is dedicated to him, in the Musée d'Orsay, and in the Musée de Versailles. Collections in the United States holding works by Théodore Chassériau include the Metropolitan Museum of Art, New York, the Fogg Art Museum of Harvard University, the National Gallery of Art of Washington, D.C., the Detroit Institute of Arts, the Museum of the Art Rhode Island School of Design, The J. Paul Getty Museum and the Art Institute of Chicago. 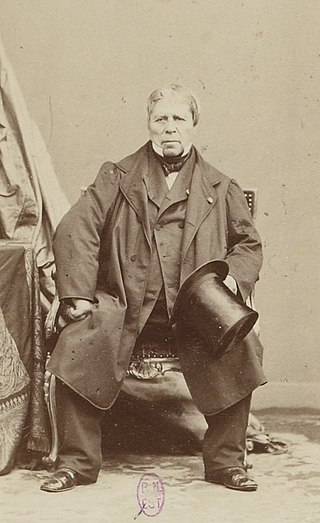 The Musée d'Orsay is a museum in Paris, France, on the Left Bank of the Seine. It is housed in the former Gare d'Orsay, a Beaux-Arts railway station built between 1898 and 1900. The museum holds mainly French art dating from 1848 to 1914, including paintings, sculptures, furniture, and photography. It houses the largest collection of Impressionist and post-Impressionist masterpieces in the world, by painters including Berthe Morisot, Claude Monet, Édouard Manet, Degas, Renoir, Cézanne, Seurat, Sisley, Gauguin, and van Gogh. Many of these works were held at the Galerie nationale du Jeu de Paume prior to the museum's opening in 1986. It is one of the largest art museums in Europe. 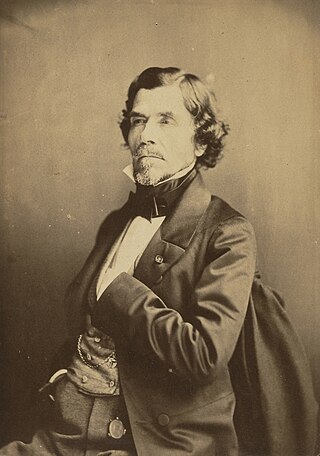 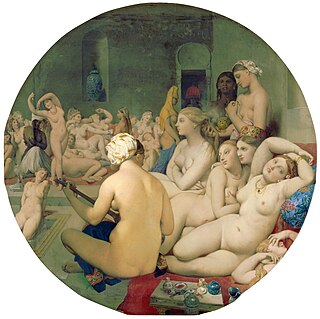 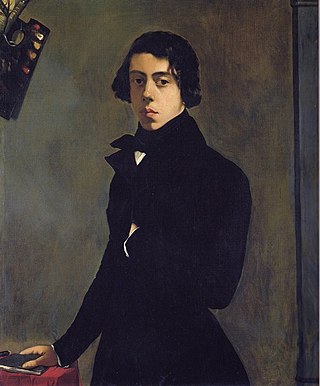 Self-Portrait, or Portrait of the Artist in a Redingote, is an oil-on-canvas painting by French romantic artist Théodore Chassériau, painted in 1835 when the artist was 16. It is housed at the Musée du Louvre in Paris.

Aline Chassériau is an 1835 oil-on-canvas painting by French romantic artist Théodore Chassériau, which represents Aline Chassériau (1822–1871), the painter's younger sister. Once owned by the artist's brother Frédéric, it was given to the Musée du Louvre by Baron Arthur Chassériau and his wife in 1918. 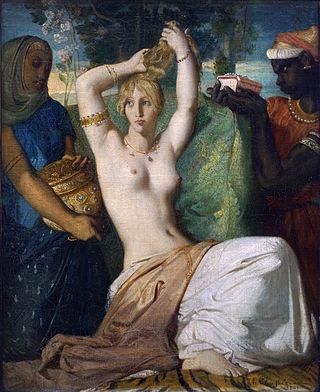 The Toilette of Esther or Esther Preparing to be Presented to King Ahasuerus, is an 1841 oil-on-canvas painting by Théodore Chassériau. The painting depicts a moment from the scriptural Book of Esther, when Esther prepared to meet King Ahasuerus, ruler of Persia, who subsequently took her as his wife. The painting is in the Musée du Louvre. Vincent Pomarède of the Museum of Fine Arts of Lyon has described it as "one of the most famous (paintings) in the Louvre". 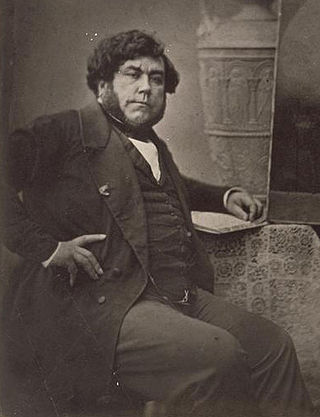 Jules-Claude Ziegler (1804-1856) was a French painter, ceramicist and photographer of the French school.

Baron Charles Frédéric Chassériau du Chiron was a Saint Dominican architect and painter, who served as chief architect of the cities of Marseille, Algiers, in Algeria; and Cairo, in Egypt. He is particularly known for having designed the seafront of the city of Algiers. 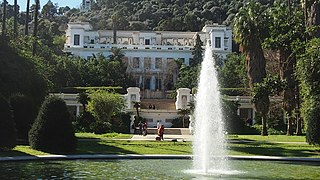 The National Museum of Fine Arts in Algiers is one of the largest art museums in Africa. Opened to the public since 5 May 1930, it is located in the Hamma district, next to the Hamma test garden. 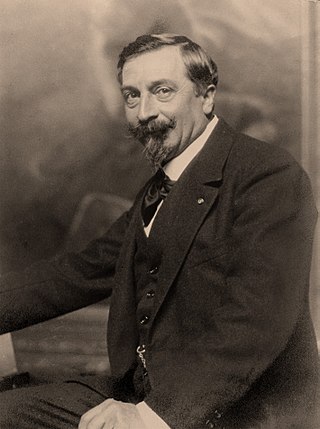 Léon Printemps was a French artist known best for his work as a portrait and landscape painter.

Léonce Bénédite was a French art historian and curator. He was a co-founder of the Société des Peintres Orientalistes Français and was instrumental in establishing Orientalist art as a legitimate genre. 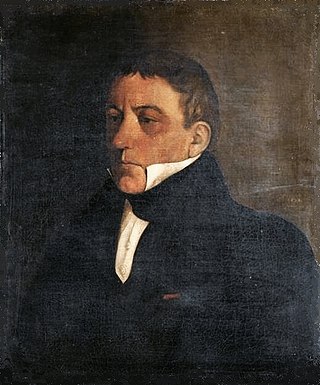 Benoît Chassériau was a French diplomat, French spy and Minister of the Interior of Cartagena, Colombia, comrade in arms of Simón Bolívar. He was the father of the artist Théodore Chassériau. 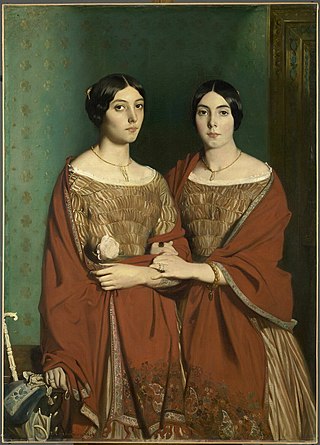 The Two Sisters is an oil-on-canvas painting by the French romantic artist Théodore Chassériau, created in 1843. Completed when the artist was twenty-three years of age, it depicts Chassériau's sisters Adèle and Aline. It is housed in the Musée du Louvre, in Paris.

Venus Anadyomene is a painting by the French painter Jean-Auguste-Dominique Ingres. It is now held at the Musée Condé, Chantilly, France. It is a female nude of the Venus Anadyomene type, showing the goddess Venus rising from the sea. 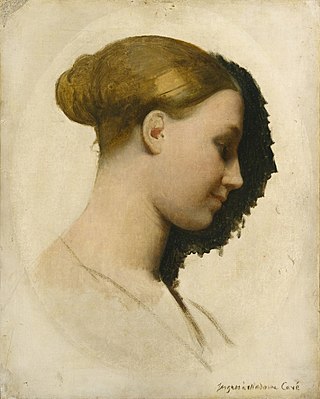 Madame Cavé was a French painter and drawing professor. Born Marie-Élisabeth Blavot and also known as Marie Monchablon in her youth, she married the painter Clément Boulanger and then, after Boulanger's death, Edmond Cavé—whom she also outlived. 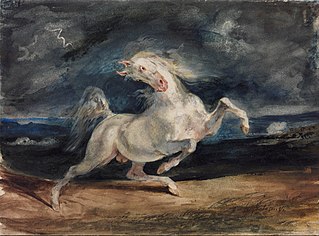 Louis-Antoine Prat is a French art historian and art collector, specialized in drawings. 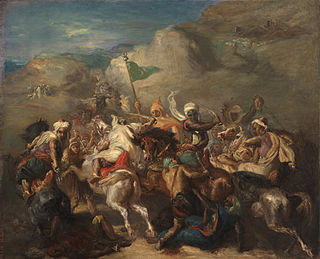 Battle of Arab Horsemen Around a Standard is an oil-on-canvas painting by the French artist Théodore Chassériau, created in 1854. It is signed and dated by the painter. It was developed from sketches he made in Algeria, and it follows the orientalist style of the time. It is housed in the Dallas Museum of Art. 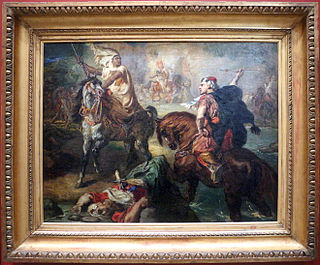 Arab Chiefs Challenging each other to Single Combat under the Ramparts of a City(French: Chefs de tribus arabes se défiant au combat singulier, sous les remparts d'une ville) is an oil on canvas painting by Théodore Chassériau. It was one of three works by Chassériau accepted for the 1852 Salon.

Media related to Paintings by Théodore Chassériau at Wikimedia Commons