Théodore Jean Arcand, LL.D. (born June 25, 1934 in Bonnyville, Alberta, Canada, died April 16, 2005, in Montreal, Quebec, Canada) was a Canadian former diplomat. He was Chargé d'Affaires a.i. to Holy See at the beginning of his career then followed by Ambassador Extraordinary and Plenipotentiary to Jordan, Lebanon and Syria concurrently. This was followed by a diplomatic appointments to Hungary and Denmark. He was later named again to the Holy See. He received an honorary doctorate from McMaster University in 1995.

The Armenian Apostolic Church is the national church of the Armenian people. Part of Oriental Orthodoxy, it is one of the most ancient Christian institutions. The Kingdom of Armenia was the first state to adopt Christianity as its official religion under the rule of King Tiridates III in the early 4th century. According to tradition, the church originated in the missions of Apostles Bartholomew and Thaddeus in the 1st century.

Saint Francis-Xavier de Montmorency-Laval, commonly referred to as François de Laval, was the first Roman Catholic bishop of Quebec, appointed when he was 36 years old by Pope Alexander VII. 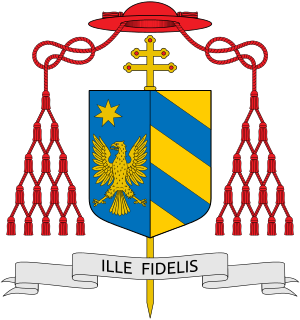 Leonardo Sandri is an Argentine Cardinal of the Catholic Church. He has been the Prefect of the Congregation for the Oriental Churches since June 2007 and a cardinal since November of that year. He served in the diplomatic service of the Holy See from 1974 to 1991, in several overseas assignments including as permanent observer of the Holy See before the Organization of American States from 1989 to 1991, and in Rome as Substitute for General Affairs in the Secretariat of State from 1977 to 1989. On 24 January 2020, Pope Francis approved his election as Vice Dean of the College of Cardinals.

James Patrick Green is an American prelate of the Catholic Church who has been Apostolic Nuncio to several Scandinavian countries since 2017.

United States–Holy See relations are bilateral relations between the United States and the Holy See. The principal U.S. official is Ambassador Callista Gingrich, who officially started at her position on December 22, 2017. The Holy See is represented by its Apostolic Nuncio, Archbishop Christophe Pierre, who assumed office on April 12, 2016. The U.S. Embassy to the Holy See is located in Rome, in the Villa Domiziana. The Nunciature to the United States is located in Washington, D.C., at 3339 Massachusetts Avenue, N.W. 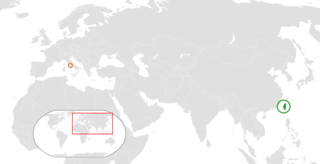 Relations between the Holy See and the Republic of China ; also known as Sino-Vatican relations were established on a non-diplomatic level in 1922. In that year, Archbishop Celso Benigno Luigi Costantini was appointed to head an Apostolic Delegation in the country. Though Archbishop Costantini did not have diplomatic status, the Chinese government gave him the same honours as those granted to the diplomatic corps accredited to China at the funeral of Sun Yat-sen in 1925. Archbishop Costantini left China in 1933 and was succeeded by Archbishop Mario Zanin, who likewise was given all the honours reserved for Ministers Plenipotentiary. The Holy See recognizes the Republic of China as the representative of China. 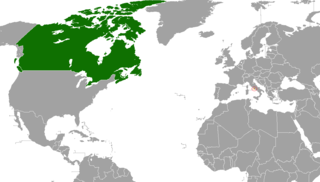 Although the Roman Catholic Church has been territorially established in Canada since the founding of New France in the early 17th century, Holy See–Canada relations were only officially established during the pontificate of Pope Paul VI in 1969.

Holy See–Ireland relations are foreign relations between the Holy See and Ireland. The majority of Irish people claim to be Roman Catholic, and indicate this on the census form. However, views on actual church dogma both on social and spiritual matters varies significantly, and weekly mass attendance is below 40%. The Holy See has an Apostolic Nunciature in Dublin.

Luigi Bonazzi is an Italian prelate of the Catholic Church who works in the diplomatic service of the Holy See. He has been the apostolic nuncio to Canada since December 2013.

Paul Fitzpatrick Russell is a U.S.-born prelate of the Catholic Church who has held positions in the diplomatic service of the Holy See since 1997. He is Apostolic Nuncio to Turkey, Turkmenistan, and Azerbaijan. He headed the Holy See's diplomatic mission to China from 2008 to 2016. He was made an archbishop in 2016.