Théodore Juste (11 January 1818 in Brussels – 10 August 1888 in Saint-Gilles) was a Belgian historian and literary scholar. He became curator of the Musée royal d'antiquités, d'armures et d'artillerie in 1859.

Étienne Constantin, Baron de Gerlache was a lawyer and politician in the United Kingdom of the Netherlands, and later became in 1831 the first Prime Minister of the newly founded Belgian state.

Jean Stengers was a Belgian historian. 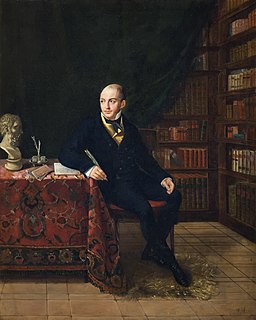 Louis de Potter, was a Belgian journalist, revolutionary, politician and writer. Out of the more than 100 books and pamphlets, one of the most notable works was his famous Letter to my Fellow Citizens in which he promoted democracy, universal electoral rights and the unity among Belgian liberals and Catholics. As one of the heroes of the Belgian Revolution, he proclaimed the independence of Belgium from the Netherlands, and inaugurated the first Belgian parliamentary assembly, on behalf of the outgoing Belgian provisional government.

In the politics of Belgium, Unionism or Union of Opposites is a Belgian political movement that existed from the 1820s to 1846.

Jean-Baptiste de Bouge (1757–1833) was a Belgian cartographer whose career spanned decades of major political upheaval, his country in turn being the Austrian Netherlands, the United Belgian States, the French First Republic, the Napoleonic Empire, and the United Kingdom of the Netherlands, before becoming the Kingdom of Belgium. He often worked with the cartographic engraver Philippe Joseph Maillart.

Ursmer Berlière, born Alfred Berlière (1861–1932) was a monk of Maredsous Abbey and a monastic historian whose bibliography ran to 360 publications.

The following lists events that happened during 1878 in the Kingdom of Belgium.

Guillaume Delcourt was a Belgian Royal Navy officer, navigator, naval engineer, and maritime advisor to King Leopold II. He was one of the major players of early Belgian expansion around the world.

Victor Leopold Jacques Louis Brants (1856–1917) was a Belgian economic and social historian, professor at the Catholic University of Leuven.

Georges Dansaert was a Belgian lawyer, historian, poet, heraldist, genealogist, and writer from Brussels. He was a member of the Seven Noble Houses of Brussels organization.

François Joseph Ferdinand Marchal (1780–1858), knight, was a civil servant in the First French Empire who became a Belgian historian and archivist.