Théodore Michel was a Luxembourgian swimmer. He competed in the men's 200 metre breaststroke event at the 1920 Summer Olympics. [1]

Michel Johann Théato was a Luxembourgish long-distance runner, and the winner of the marathon at the 1900 Olympics in Paris for France. He was born in Luxembourg City, Luxembourg and died in Paris, France.

France competed at the 1956 Summer Olympics in Melbourne, Australia and Stockholm, Sweden. 137 competitors, 119 men and 18 women, took part in 95 events in 15 sports.

Lebanon competed at the 1960 Summer Olympics in Rome, Italy. The nation returned to the Olympic Games after boycotting the 1956 Summer Olympics because of British and French involvement in the Suez Crisis. 19 competitors, all men, took part in 15 events in 6 sports.

Lebanon competed at the 1992 Summer Olympics in Barcelona, Spain. Twelve competitors, all men, took part in 15 events in 7 sports.

Michel Pécheux was a French fencer.

Michel Vion is a French alpine skier and world champion. He competed in three events at the 1984 Winter Olympics.

Michel Scheuer was a West German sprint canoeist, born in Rodange, Luxembourg, who competed in the 1950s. Competing in two Summer Olympics, he won three medals with a gold and two bronzes.

Michel Andrieux is a French competition rower and Olympic champion.

Theodore Allison Nash II is an American competition rower and Olympic champion, rowing coach, and sports administrator. Nash has represented his country, either as a coach or athlete, at eleven separate Olympic Games since 1960.

Michel Roche was an equestrian from France and Olympic champion. He won a gold medal in show jumping with the French team at the 1976 Summer Olympics in Montreal. 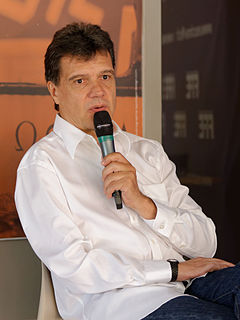 Jean-Michel Henry is a French fencer. He won a gold, a silver and two bronze medals in the épée events at four different Olympic Games.

Michel Hiblot is a French former sprinter who competed in the 1964 Summer Olympics.

Birgit Michels is a German badminton player. She competed for Germany at the 2008 and 2012 Summer Olympics in the mixed doubles. In 2008, she competed with Kristof Hopp, and in 2012 she competed with Michael Fuchs, reaching the quarter-finals.

Michel Mulder is a Dutch speed skater. He is the 2014 Olympic Champion at the 500 m distance and 2014 Olympic bronze medalist at the 1,000 m distance. He finished second in the men's 500 metres event at the 2012 World Single Distance Speed Skating Championships. His twin brother, Ronald Mulder, is also a speed skater. Despite being the defending champion for the 500m distance at the Olympic Games, Michel did not qualify for the 2018 Olympics. His twin brother competed in the event and finished in 7th place.