Saint Jean-Théophane Vénard, M.E.P. (November 21, 1829 at Saint-Loup-sur-Thouet, Diocese of Poitiers, France – February 2, 1861 in Tonkin, Vietnam) was a French Catholic missionary to Indo-China. He was a member of the Paris Foreign Missions Society. He was beatified in company with thirty-three other Catholic martyrs, most of whom were natives of Tonkin, Cochin-China, or China. Pope John Paul II canonized him, with nineteen other martyrs, in 1988.

Théophane Vénard studied at the College of Doué-la-Fontaine, Montmorillon, Poitiers, and at the Paris Seminary for Foreign Missions which he entered as a sub-deacon. Ordained a priest on 5 June 1852, he departed for the Far East on 19 Sept. After fifteen months at Hong Kong he arrived at his mission in West Tonkin (northern Vietnam). At the time, it was illegal to proselytise in Vietnam.

Shortly after Father Vénard's arrival a new royal edict was issued against Christians, and bishops and priests were obliged to seek refuge in caves, dense woods, and elsewhere. Father Vénard continued to exercise his ministry at night, and, more boldly, in broad day. On 30 November 1860, he was betrayed and captured. Tried before a mandarin, he refused to apostatize and was sentenced to be beheaded. He remained a captive until 2 February, and during this interval lived in a cage, from which he wrote to his family beautiful and consoling letters, joyful in anticipation of his crown. His bishop, Monsignor Retord, wrote of him at this time: "Though in chains, he is as gay as a little bird".

On the way to martyrdom Father Vénard chanted psalms and hymns. To his executioner, who coveted his clothing and asked what he would give to be killed promptly, he answered: "The longer it lasts the better it will be". His head, after exposure at the top of a pole, was secured by the Christians and is now venerated in Tonkin. The body rests in the crypt at the motherhouse of the Paris Foreign Mission Society in Paris, France. 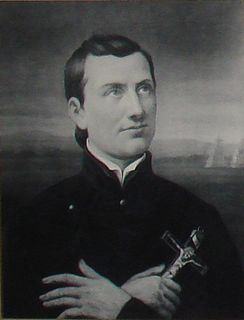 Augustin Schoeffler (1822–1851) was a French saint and martyr in the Roman Catholic Church and a member of the Paris Foreign Missions Society. He was a priest in Lorraine who joined the Foreign Missions of Paris. He worked as a missionary to Indochina and was one of two French missionaries killed in northern Vietnam between 1847 and 1851. At the time, it was illegal to proselytize in Vietnam.

Saint Vicente Liem de la Paz was a Tonkinese Dominican friar venerated as a saint and martyr by the Roman Catholic Church. 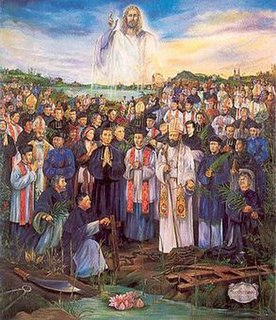 The Vietnamese Martyrs, also known as the Martyrs of Indochina, Martyrs of Tonkin, Annam, and Cochinchina, or Andrew Dung-Lac and Companions, are saints on the General Roman Calendar who were canonized by Pope John Paul II. On June 19, 1988, thousands of Overseas Vietnamese worldwide gathered at the Vatican for the Celebration of the Canonization of 117 Vietnamese Martyrs, an event chaired by Monsignor Tran Van Hoai. Their memorial is on November 24.

Saint Kim Taegon Andrew, generally referred to as Saint Andrew Kim Taegon in English, was the first Korean-born Catholic priest and is the patron saint of Korea, being canonized and made a Saint with 120+ others on 6 May 1984. In the late 18th century, Roman Catholicism began to take root slowly in Korea and was introduced by scholars who visited China and brought back Western books translated into Chinese. In 1836 Korea saw its first consecrated missionaries arrive, only to find out that the people there were already practicing Korean Catholics. 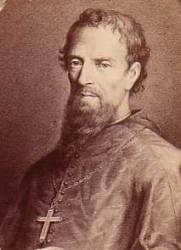 Laurent-Joseph-Marius Imbert, MEP, sometimes called Laurent-Marie-Joseph Imbert and affectionately known in Korea as Bishop Imbert Bum was a French missionary bishop in Asia. Most notable among the Koreans, he was appointed by Pope Gregory XVI in August 1836 when first Bishop Barthélemy Bruguière died in Manchuria. 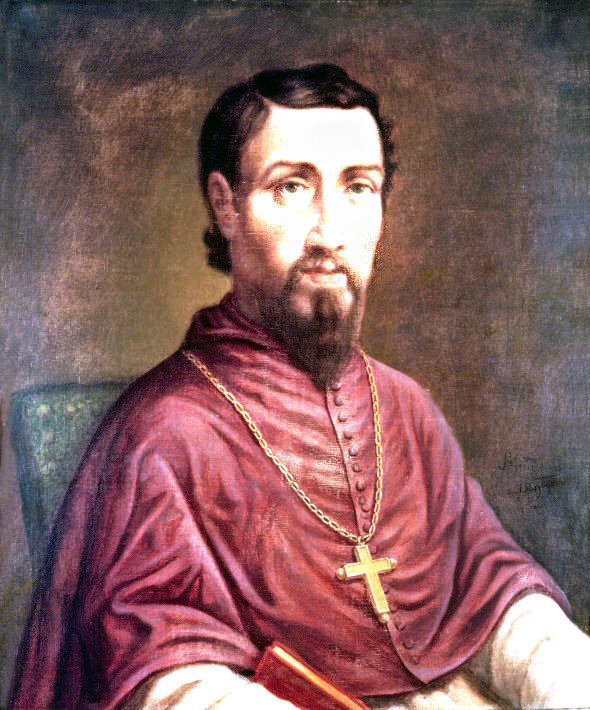 Siméon-François Berneux was a French Catholic missionary to Asia, and a member of the Paris Foreign Missions Society who was canonized as a saint. Berneux was executed in the anti-Christian purges at Saenamteo, Seoul, Korea, in 1866. His death provoked the French campaign against Korea the same year.

Jean-Louis Bonnard was a French Roman Catholic missionary to Vietnam, one of the Martyrs of Vietnam, canonized in 1988.

Saint Joseph Marchand was a French missionary in Vietnam and a member of the Paris Foreign Missions Society. He is now a Roman Catholic saint, celebrated on the 30th of November.

Pierre-Rose-Ursule Dumoulin-Borie was a French Catholic missionary priest and a member of the Paris Foreign Missions Society. He is a Catholic saint, canonized in 1988 along with other Vietnamese Martyrs.

Michael Hồ Đình Hy was a Vietnamese mandarin official who was martyred for his Roman Catholic belief during the persecutions by Emperor Tự Đức. He was canonized in 1988 along with another 116 Vietnamese Martyrs. 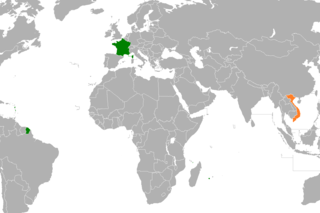 French–Vietnamese relations started as early as the 17th century with the mission of the Jesuit father Alexandre de Rhodes. Various traders would visit Vietnam during the 18th century, until the major involvement of French forces under Pigneau de Béhaine from 1787 to 1789 helped establish the Nguyễn Dynasty. France was heavily involved in Vietnam in the 19th century under the pretext of protecting the work of Catholic missionaries in the country.

Saint Jean-Charles Cornay, M.E.P., was a French missionary of the Paris Foreign Missions Society who was martyred in Vietnam. He was executed in Ha Tay, Tonkin, now Vietnam, during the persecutions of Emperor Minh Mạng. 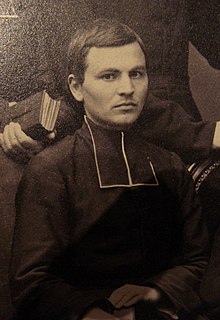 Pierre Henri Dorie (1839–1866) was a French missionary of the Paris Foreign Missions Society, who was martyred in Korea in 1866. His feast day is March 7, and he is also venerated along with the rest of the 103 Korean martyrs on September 20. 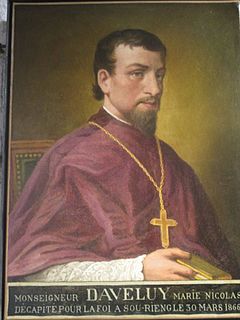 Marie-Nicolas-Antoine Daveluy was a French missionary and saint. His feast day is March 30, and he is also venerated along with the rest of the 103 Korean martyrs on September 20. 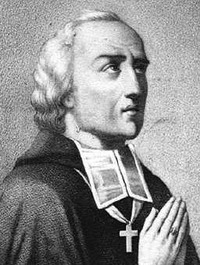 Bishop St. Louis Gabriel Taurin Dufresse was a member of Society of Foreign Missions of Paris and a Martyr Saint of the Catholic Church. He was born at Ville-de-Lezoux, diocese of Clermont, France. He joined the Society of Foreign Missions of Paris seminary in 1774. He was ordained a priest on 17 September 1774. He was sent as a missionary to Szechuan, China in 1775. There he was imprisoned for six months in 1784 during a government persecution of Christians. He was reassigned to Macao, but return to the Chinese missions in 1788.

Joseph-Isidore Godelle was a missionary of Paris Foreign Missions Society and was the Vicar Apostolic of Pondicherry from 21 March 1861 until his death on 15 July 1867.

The Blessed Martyrs of Laos are seventeen Catholic priests and professed religious as well as one lay young man venerated as martyrs killed in Laos between 1954 and 1970 during a period of anti-religious sentiment under the Pathet Lao communist political movement.