Philippe Thys was a Belgian cyclist and three times winner of the Tour de France. 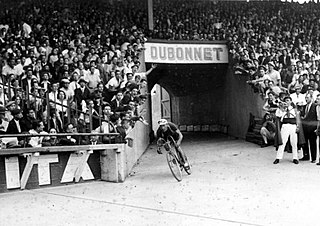 Romain Maes was a Belgian cyclist who won the 1935 Tour de France after wearing the yellow jersey of leadership from beginning to end. Maes was the 13th child in his family. He started racing when he was 17. He turned professional in 1933 and won the Omloop van het Westen. The following year he started the Tour de France and twice finished stages in second place. He then crashed on the day from Digne to Nice and left the race in an ambulance.

Georges Speicher was a French cyclist who won the 1933 Tour de France along with three stage wins, and the 1933 World Cycling Championship.

The 1924 Tour de France was the 18th edition of the Tour de France and was won by Ottavio Bottecchia. He was the first Italian cyclist to win the Tour and the first rider to hold the yellow jersey the entire event. The race was held over 5,425 km with an average speed of 23.972 km/h (14.896 mph). 60 riders finished the race from the original 157 cyclists. 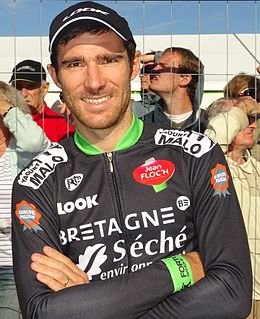 Romain Feillu is a French former road racing cyclist, who rode professionally between 2006 and 2019. He is the older brother of Brice Feillu, who also competed professionally as a cyclist.

Raymond Impanis was a Belgian professional cyclist from 1947 to 1963. He won Paris–Roubaix, the Tour of Flanders, Gent–Wevelgem and three stages in Tour de France. He has been made an honorary citizen of the town of Kampenhout.

Vicente López Carril was a Spanish professional road racing cyclist from A Coruña. He finished among the top ten riders in the overall classification of several Grand Tours and third in 1974 Tour de France. During his career he also won three stages of Tour de France, as well as a stage in both Giro d'Italia and Vuelta a España.

Pedro Muñóz Machín Rodríguez is a former Spanish professional road bicycle racer. He won a stage in the 1981 Vuelta a España and finished on the podium in 2nd place overall. 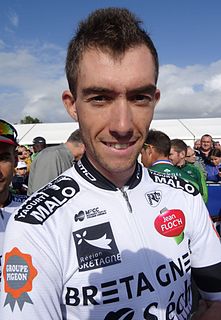 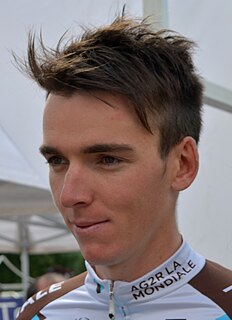 Romain Bardet is a professional French racing cyclist, who currently rides for UCI WorldTeam AG2R La Mondiale. Bardet is known for his climbing ability which makes him one of the top contenders in Grand Tours.

Łukasz Owsian is a Polish professional racing cyclist, who currently rides for UCI ProTeam Arkéa–Samsic. He was named in the start list for the 2017 Giro d'Italia.

Romain Cardis is a French cyclist, who currently rides for UCI ProTeam Total Direct Énergie. He was named in the startlist for the 2016 Vuelta a España.

Élie Gesbert is a French racing cyclist, who currently rides for UCI ProTeam Arkéa–Samsic. Gesbert competed in the Tour de France in 2017, 2018 and 2019.