Théophile Bovy (March 8, 1863 – June 6, 1937) was a Belgian journalist, poet and dramatic author in Wallonia, who wrote the words of the Le Chant des Wallons , the Walloon national anthem.

He was the father of actress Berthe Bovy.

Walloons are a Romance cultural identity of people living for the most part in Belgium, principally its southern region of Wallonia, who primarily speak langues d'oïl such as Belgian French, Picard and Walloon. Walloons are mainly Roman Catholic.

The Walloon Region, usually simply referred to as Wallonia, is one of the three regions of Belgium—alongside the Flemish Region and the Brussels-Capital Region.

Henri-Alexandre Wallon was a French historian and statesman whose decisive contribution to the creation of the Third Republic led him to be called the "Father of the Republic". He was the grandfather of psychologist and politician Henri Wallon.

"The Song of the Walloons" is the regional anthem of Wallonia in Belgium. The original lyrics were written by Théophile Bovy in 1900 in the Walloon language. A year later, it was set to music composed by Louis Hillier. Performed for the first time in the city of Liège, the song quickly spread to other parts of French-speaking Belgium and established itself like a "national" anthem for Wallonia.

The 1902–03 season was the eighth competitive season in Belgian football. 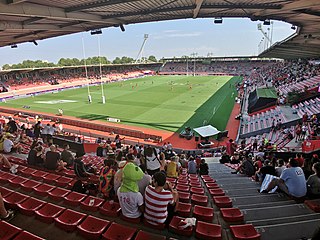 The Stade Ernest-Wallon is a multi-purpose stadium in Toulouse, France, used mostly for rugby union games. It is currently the home of rugby union club Stade Toulousain, the first French rugby club with one million fans across Facebook, Instagram and Twitter. The stadium was built in the late 1980s and it was recently renovated. It has a capacity of 19,500. The stadium however is not always suitable for big games. For the larger fixtures, such as championships play-offs or European Rugby Champions Cup games, the fixture may be moved to Stadium Municipal, which has nearly double the capacity.

Gustave Serrurier-Bovy (1858–1910) was a Belgian architect and furniture designer. He is credited with creating the Art Nouveau style, coined as a style in Paris by art dealer Siegfried Bing. 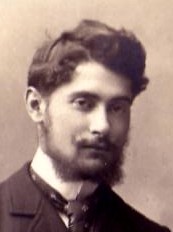 Henri Paul Hyacinthe Wallon was a French philosopher, psychologist, neuropsychiatrist, teacher, and politician. He was the grandson of the historian and statesman Henri-Alexandre Wallon.

The Walloon Movement is an umbrella term for all Belgian political movements that either assert the existence of a Walloon identity and of Wallonia and/or defend French culture and language within Belgium, either within the framework of the 1830 Deal or either defending the linguistic rights of French-speakers. The movement began as a defence of the primacy of French but later gained political and socio-economic objectives. In French, the terms wallingantisme and wallingants are also used to describe, sometimes pejoratively, the movement and its activists.

The Stade des Ponts Jumeaux was a rugby union stadium, inaugurated on 24 November 1907, in the Ponts Jumeaux district of Toulouse, south-western France. The land was purchased by the embryonic Stade Toulousain rugby team – with financial assistance from city notables – then headed by a law professor from the University of Toulouse, Ernest Wallon. The stadium, nicknamed Le Wallon, had a capacity of 6500 and hosted many internationals during its existence. In the early 1980s, the land on which the stadium stood was compulsorily purchased to make way for the Toulouse ringroad and the Stade Toulousain moved from the Ponts Jumeaux to a new stadium at Sept-Deniers, later renamed Stade Ernest-Wallon. One of the pavilions at Stade Ernest-Wallon is named after the Ponts Jumeaux.

Wallon-Cappel is a commune in the Nord department in northern France.

Berthe Bovy, sometimes known as Betty Bovy, was a Belgian actress who appeared in theatre, films and television programmes for over 60 years.

Auguste Baud-Bovy was a Swiss painter who specialized in landscapes, village scenes and shepherds.

Philippe Bovy was a Belgian boxer and Olympian. He competed in the 1920 Olympic Summer Games in Antwerp. In the Men's featherweight tournament, he was awarded a bye in the Round of 32, defeated Wim Hesterman in the Round of 16, but was eliminated in the quarterfinals by Jean Gachet of France.

Boule de Suif is a 1945 French historical drama film directed by Christian-Jaque and starring Micheline Presle, Berthe Bovy and Louise Conte. It is an adaptation of the short story Boule de suif by Guy de Maupassant, set during the Franco-Prussian War.

Sarah Bovy is a Belgian female racing driver. She has last competed with the Iron Lynx team in the European Le Mans Series in 2021.

Daniel Baud-Bovy was a Swiss writer and art historian