From 1869 he studied at the École Normale Supérieure in Paris, receiving his agrégation for history in 1874. He then became a member of the French School at Athens, of which, he directed a highly successful excavation at Delos (from 1877). [1] For several years he taught classes in ancient Greek and Latin at the University of Nancy, and in 1884 became a substitute professor for Paul Foucart at Collège de France. [2]

From 1891 to 1903 he served as director of the French School at Athens, during which time, he was in charge of an important excavation at Delphi. [3] From 1904 to 1911 he was director of national museums (Louvre), but was forced to relinquish this position due to the theft of the Mona Lisa in August 1911. After a brief stay at Athens, he returned to Paris, where from 1913 to 1923, he was director of the Bibliothèque nationale de France (National Library of France). [2]

The Delphic Hymns are two musical compositions from Ancient Greece, which survive in substantial fragments. They were long regarded as being dated circa 138 BCE and 128 BCE, respectively, but recent scholarship has shown it likely they were both written for performance at the Athenian Pythaides in 128 BCE. If indeed it dates from ten years before the second, the First Delphic Hymn is the earliest unambiguous surviving example of notated music from anywhere in the western world whose composer is known by name.

Adolphe Joseph Reinach was a French archaeologist and Egyptologist who participated in excavations in Greece and Egypt and published works on the Gauls.

Annie Bélis is a French archaeologist, philologist, papyrologist and musician. She is a research director at the French CNRS, specialized in music from classical antiquity, Ancient Greece and Ancient Rome.

Édouard Muller Ardaillon was a French historian, archaeologist and geographer.

Pierre Amandry was a French hellenist, especially interested with ancient Greece and its relationships with the Orient. He was born at Troyes on December 31, 1912, and died in Paris on February 21, 2006. A large part of his work was on the site of Delphi, excavated by the French School at Athens, of which he was secretary general from 1941-1948 and director from 1969-1981.

The Gymnasium at Delphi is a building complex of the 4th century B.C. at Delphi in Greece which comprised the xystus and the palaestra along with its auxiliary buildings such as the changing rooms and the baths. It was situated between the Sanctuary of Athena Pronaia and the fountain Castalia. Some remains of archaic buildings discovered under the xystus were possibly related to a sanctuary dedicated to Demetra and indicate the sanctity of the area from earlier times.

André Plassart was a 20th-century French hellenist, epigrapher and archaeologist.

Gustave Fougères was a French archaeologist, spécialist of archaic Greece.

Claude Rolley was a French archaeologist, emeritus at the University of Burgundy, writer on art, archaeology of Greece and Gaule.

Maurice Holleaux was a 19th–20th-century French historian, archaeologist and epigrapher, a specialist of Ancient Greece.

Pierre Devambez was a 20th-century French Hellenist, archaeologist and historian of Greek art.

Charles Dugas was a 20th-century French archaeologist, specialized in the study of pottery of ancient Greece, a member of the French School at Athens and dean of the Faculté des lettres de Lyon.

Pierre Roussel was a 20th-century French epigrapher and historian, director of the French School at Athens from 1925 to 1935. 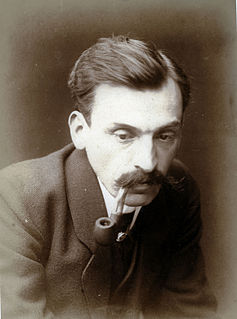 Fernand Henri Fabien Courby was a French archaeologist and Hellenist, a specialist of ancient Greece, a member of the French School at Athens, and professor at the Faculté des lettres of the University of Lyon. 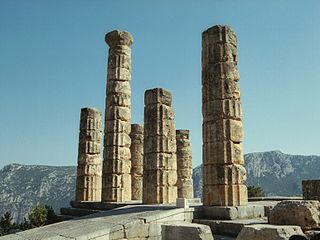 Spintharus of Corinth was an ancient Greek architect. Pausanias reported in his Descriptions of Greece that the Alcmaeonids hired him to build a temple at Delphi. This is the only record of Spintharus. The temple to Apollo at Delphi had to be rebuilt after a fire in 548 BC and again after an earthquake in 373 BC. Historians have offered competing claims as to which temple Spintharus constructed.

Roland Étienne is a French archaeologist and historian specialising in the history of Greek archaeology, ancient architecture and Hellenistic history.