Théophile Jeusset (1910 in Rennes – 1968 in Nantes) was a Breton nationalist writer and fascist political activist. He is also known by his Breton language pseudonym Jean-Yves Keraudren.

Born in Rennes on 25 April 1910, Jeusset adopted militant Breton nationalism from his youth. Initially associated with the Breton Autonomist Party, Jeusset broke away from it to form the fascistic Breiz da Zont movement and its political wing, the Parti nationaliste intégral breton (Breton Integral Nationalist Party: PNIB). The party was, however, tiny. Jeusset later joined with fellow nationalist extremists Gwilherm Berthou and Célestin Lainé to found Kentoc'h Mervel (Sooner Death), a group dedicated to direct action. Lainé, however, insisted that a more tightly organized group was necessary, going on to create the terrorist cell Gwenn ha du . [1] After Gwenn ha du performed its first violent act, blowing up a sculpture, Jeusset was one of six nationalist militants who were arrested and detained.

It is due to our particular resistance to the conquest of sovereign French territory by the corrupting ideas which emanate more or less from the Jews - 'freemasonry', 'secularism' - etc, that the Bretons were decimated during the last world war: over 200,000 of them. It is easy to invoke military explanations for this carnage, but that does not alter the fact the actual organizer of troop dispositions was the Jew Abrahami, born... in the ghetto of Constantinople. [2]

Jeusset was later associated with Olier Mordrel who founded the Breton National Party on the model of the Nazi party.

During World War II Jeusset broke away from Mordrel to create his own party once more, the Breton Social-National Workers' Movement, but he was unable to obtain many followers. Jeusset eventually joined Lainé's Bezen Perrot militia, which was affiliated to the SS. Captured after the war, Jeusset was sentenced to forced labour for life.

In 1965 he published an autobiographical memoir: A Contre-courant (Against the Current). [3]

The flag of Brittany, a region in the northwest of France, is called the Gwenn-ha-du, pronounced [ɡwɛnaˈdyː], which means white and black, in Breton. The flag was designed in 1923 by Morvan Marchal. It is also unofficially used in the department of Loire-Atlantique, although this now belongs to the Pays de la Loire and not to the region of Brittany, as the territory of Loire-Atlantique is historically part of the province of Brittany. Nantes, its prefecture, was once one of the two capital cities of Brittany.

Alan Heusaff, also Alan Heussaff was a Breton nationalist, linguist, dictionary compiler, prolific journalist and lifetime campaigner for solidarity between the Celtic peoples. A co-founder of the Celtic League in 1961, he was its first general secretary until 1984.

Gwenn ha Du was a paramilitary group founded at the end of 1930 in Paris by Célestin Lainé. It advocated Breton nationalism through "direct action" and published a secret manual aimed at instructing readers in terrorism. The phrase "Gwenn ha du" is the nickname for the Breton flag, which is in these colours. 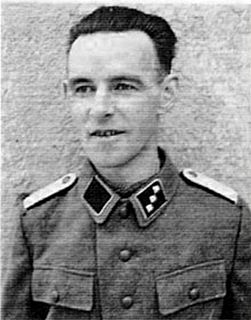 Célestin Lainé (1908–1983) was a Breton nationalist and collaborator during the Second World War who led the SS affiliated Bezen Perrot militia. His Breton language name is Neven Hénaff. He was a chemical engineer by training. After the war he moved to Ireland. 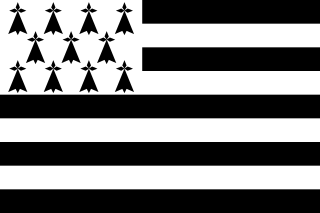 Breton nationalism is a form of regional nationalism associated with the region of Brittany in France. The political aspirations of Breton nationalists include the desire to obtain the right to self-rule, whether within France or independently of it, and to acquire more power in the European Union, United Nations and other international institutions. 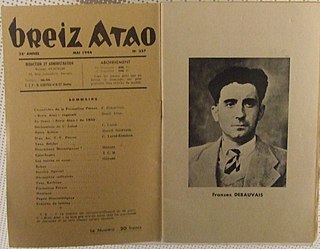 Breiz Atao, was a Breton nationalist journal in the mid-twentieth century. It was written in French, and has always been considered as a French nationalist journal by the non-francized Bretons. The term is also used for the broader movement associated with the journal's political position.

The abbé Jean-Marie Perrot, in Breton Yann Vari Perrot, was a Breton priest, Breton independentist assassinated by the Communist resistance. He was the founder of the Breton Catholic movement Bleun-Brug.

The Breton Social-National Workers' Movement was a nationalist, separatist, and Fascist movement founded in 1941 by Théophile Jeusset. It emerged in Brittany from a deviationist faction of the Breton National Party; it disappeared the same year. 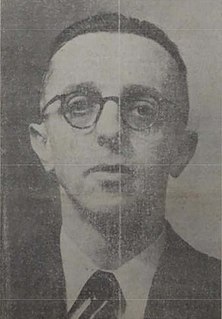 Olier Mordrel is the Breton language version of Olivier Mordrelle, a Breton nationalist and wartime collaborator with the Third Reich who founded the separatist Breton National Party. Before the war, he worked as an architect. His architectural work was influenced by Art Deco and the International style of Le Corbusier. He was also an essayist, short story writer, and translator. Mordrel wrote some of his works under the pen names Jean de La Bénelais, J. La B, Er Gédour, A. Calvez, Otto Mohr, Brython, and Olivier Launay. 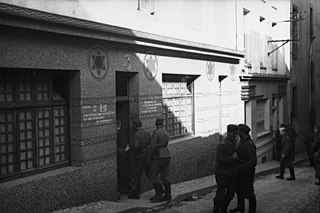 Before and during World War II, the various Breton nationalist movements were generally right-wing, and sometimes fascist. The extent to which this led to collaboration with the Nazi occupiers of France during the war, together with their motivations, is a matter of historical controversy.

The Breton National Party was a nationalist party in Brittany that existed from 1931 to 1944. The party was disbanded after the liberation of France in World War II, because of ties to the Third Reich. 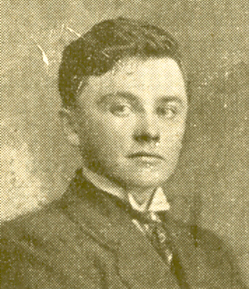 Morvan Marchal, is the Breton name of Maurice Marchal, an architect and a militant Breton nationalist. He is best known for having designed the national flag of Brittany. 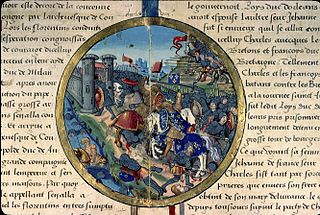 The Battle of Saint-Aubin-du-Cormier took place on 28 July 1488, between the forces of King Charles VIII of France, and those of Francis II, Duke of Brittany, and his allies. The defeat of the latter signalled the end to the "guerre folle", a feudal conflict in which French aristocrats revolted against royal power during the regency of Anne de Beaujeu. It also effectively precipitated the end of the independence of Brittany from France.

The Bezen Perrot, officially the Breton SS Armed Formation was a small collaborationist unit established by Breton nationalists in German-occupied France during World War II. It was made up of personnel from Lu Brezhon, a Breton nationalist militia, under the leadership of Célestin Lainé.

Maurice Duhamel was the pen-name of Maurice Bourgeaux, a Breton musician, writer and activist who was a leading figure in Breton nationalism and federalist politics in the years before World War II.

Breiz da Zont, was a Breton nationalist periodical active during the 1930s. It was affiliated to an extremist offshoot of the Breton Autonomist Party.

Gwilherm Berthou was a Breton nationalist and neo-Druidic bardic poet. He was a member of the Breton artistic movement Seiz Breur.

Camille Le Mercier d'Erm was a French poet, historian and Breton nationalist. He later adopted the neo-Bardic name Kammermor. He is also known as Kamil Ar Merser 'Erm, the Breton language form of his name. His work as a poet and historian is marked by nationalist claims and calls to rebellion against the French state on the model of Irish nationalism.