The People's Republic of the Congo competed at the 1980 Summer Olympics in Moscow, USSR. The nation returned to the Olympic Games after boycotting the 1976 Summer Olympics.

The People's Republic of the Congo competed at the 1972 Summer Olympics in Munich, West Germany. The nation returned to the Olympic Games after missing the 1968 Summer Olympics.

Equatorial Guinea competed at the 1984 Summer Olympics in Los Angeles, United States, which were held from 28 July to 12 August. This was the first time the country took part in a Summer Olympics. The delegation consisted of four athletics competitors: sprinters Gustavo Envela and Secundino Borabota, and middle-distance runners Bartolomé Esono Asumu and Diosdado Lozano. All four failed to advance beyond the initial heats in their respective competitions. The best performance came from Envela who placed fifth in the eighth heat of the men's 100 metres. 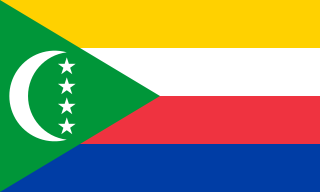 The Saint Kitts and Nevis National Olympic Committee sent four athletes to the 2008 Summer Olympics in Beijing, China. All four participated in the track and field competitions across four different events. Three women and one man comprised the Kittitian delegation. Williams and Ponteen did not advance past Qualifications in their events; Hodge reached quarterfinals in both the 100m and 200m sprints; and Collins, who participated in two events, reached the Semifinal round in the 100m sprint, and ranked sixth in the finals in the 200m sprint. Saint Kitts and Nevis did not win any medals during the Beijing Olympics. The flag bearer for the team at the opening ceremony was first-time Olympian Virgil Hodge.

São Tomé and Príncipe competed at the 2008 Summer Olympics in Beijing, China from 8–24 August 2008. This marked the country's fourth entry in the Olympics, since its debut in the 1996 Summer Olympics in Atlanta, Georgia, United States. The country's delegation consisted of three competitors, competing in two disciplines: they were athletics competitors Naiel Santiago D'Almeida and Celma Bonfim da Graça, and canoeist Alcino Silva. None of the competitors made it to their event final, though Silva did advance to the semi-finals.

The men's 100 metres event was part of the track and field athletics programme at the 1924 Summer Olympics. This race was depicted in the film Chariots of Fire. The first two rounds were held on 6 July, with the semifinals and final on 7 July. Eighty-six sprinters from 34 countries competed.

The men's 100 metre freestyle was a swimming event held as part of the swimming at the 1936 Summer Olympics programme. It was the ninth appearance of the event, which had not been featured only at the 1900 Games. The competition was held on Saturday and Sunday, 8 and 9 August 1936.

The men's 400 metres event was part of the track and field athletics programme at the 1924 Summer Olympics. This race was depicted in the film Chariots of Fire. The competition was held on Thursday, July 10, 1924 and on Friday, July 11, 1924.

The men's 100 metres competition at the 1906 Intercalated Games was held at the Panathenaic Stadium in Athens, Greece from 25–27 April. A total of 42 athletes from 13 nations competed in the 100 m event.