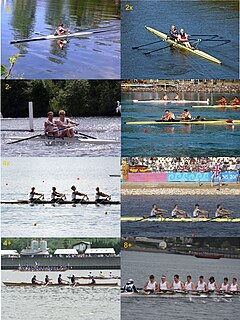 Rowing, sometimes referred to as crew in the United States, is a sport whose origins reach back to Ancient Egyptian times. It involves propelling a boat on water using oars. By pushing against the water with an oar, a force is generated to move the boat. The sport can be either recreational for enjoyment or fitness, or competitive, when athletes race against each other in boats. There are a number of different boat classes in which athletes compete, ranging from an individual shell to an eight-person shell with a coxswain.

The men's coxless four competition at the 2016 Summer Olympics in Rio de Janeiro was held from 8 to 12 August at the Lagoon Rodrigo de Freitas.

The 2016 Summer Olympics, officially known as the Games of the XXXI Olympiad and commonly known as Rio 2016, was an international multi-sport event that was held from 5 to 21 August 2016 in Rio de Janeiro, Brazil, with preliminary events in some sports beginning on 3 August. These were the first Olympic Games ever to be held in South America and the second to be held in a developing country, after the 1968 games in Mexico City.

The People's Republic of the Congo competed at the 1980 Summer Olympics in Moscow, USSR. The nation returned to the Olympic Games after boycotting the 1976 Summer Olympics. 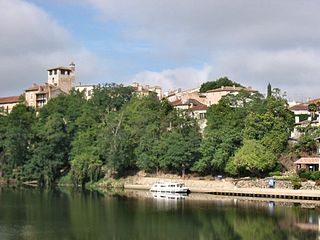 Clairac is a commune in the Lot-et-Garonne department in south-western France.

The People's Republic of the Congo competed at the 1972 Summer Olympics in Munich, West Germany. The nation returned to the Olympic Games after missing the 1968 Summer Olympics. 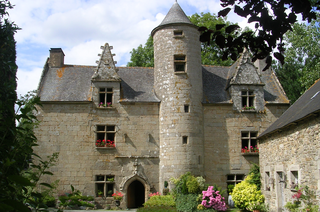 Plésidy is a commune in the Côtes-d'Armor department of Brittany in northwestern France. Inhabitants of Plésidy are called plésidiens in French.

Izeste is a commune in the Pyrénées-Atlantiques department and Nouvelle-Aquitaine region of south-western France. 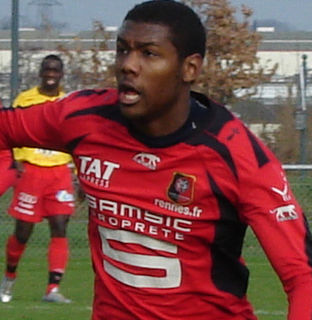 Kévin Théophile-Catherine is a French professional footballer who plays as a defender for Croatian First Football League team Dinamo Zagreb.

Princess Caroline Marie Constance Napoléon is a member of the House of Bonaparte, which reigned as Emperors of the French twice during the 19th century. She is the first child and eldest daughter of Prince Charles Napoléon and his first wife, Princess Béatrice of Bourbon-Two Sicilies. Her younger brother is Jean-Christophe, Prince Napoléon, and her younger half-sister is Princess Sophie Napoléon.

Pascal Théophile is a former French athlete who specialised in the 100 meters. Theophile competed at the 1996 Summer Olympics where he reached the quarter finals of the 100 meters and the final of the 4 × 100 metres relay. His personal best in the individual event, 10.21, was set in 1995, although he ran a wind-assisted 10.13 the following year.

Valentin Onfroy is a French rower. He competed in the men's coxless four event at the 2016 Summer Olympics. 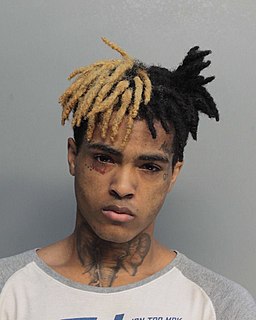 Jahseh Dwayne Ricardo Onfroy, known professionally as XXXTentacion, was an American rapper, singer and songwriter. A controversial figure within the hip hop industry, Onfroy has been regarded to have left behind "a huge musical footprint" due to his impact on his young fanbase and his popularity during his short career. His most notable appearance was his tattoos and his distinctive half-colored hair, which was inspired by the One Hundred and One Dalmatians antagonist Cruella de Vil.

Théophile Hounou is a Beninese athlete. He competed in the men's long jump at the 1980 Summer Olympics.

Onfroy is a surname. It is French in origin and derived from Humphrey. Notable people with the surname include:

On June 18, 2018, American rapper Jahseh Dwayne Ricardo Onfroy, known professionally as XXXTentacion, was shot and killed in an apparent robbery just outside RIVA Motorsports, an upscale seller of motorcycles and watercraft in Deerfield Beach, Florida. He was shot multiple times in the neck and was in critical condition before being pronounced dead at exactly 5:30 p.m.