From 1871 to 1922 he was a curator of zoological collections at the museum of natural history in Berne. In 1874–1876 he took part in a scientific journey aboard the German frigate "S.M.S. Gazelle". Two years after his return he was a professor of zoology and comparative anatomy at the school of veterinary medicine in Berne. [1] [2]

With Victor Fatio (1838-1906), he published the first three installments of Catalogue des oiseaux de la Suisse (Catalogue of birds of Switzerland). Other writings by Studer include: 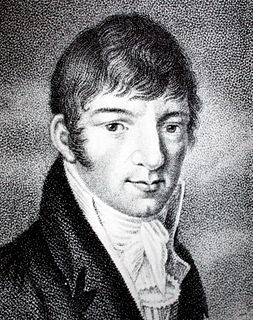 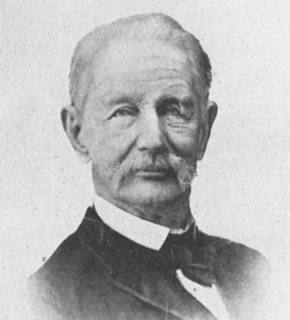 Karl Hermann Konrad Burmeister was a German Argentine zoologist, entomologist, herpetologist, and botanist. He was born in Stralsund and died in Buenos Aires. A brief biography, with particular reference to his work on phasmids was published by Bragg in 2007.

Gustav Karl Laube was a Bohemian German geologist and paleontologist.

Ludwig Redtenbacher was an Austrian doctor and entomologist mainly interested in beetles. He was the brother of the chemist Josef Redtenbacher (1810–1870). 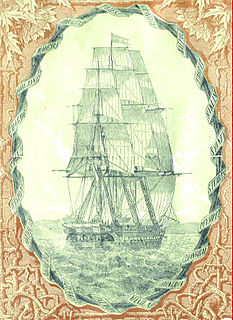 SMS Novara was a sail frigate of the Austro-Hungarian Navy most noted for sailing the globe for the Novara Expedition of 1857–1859 and, later for carrying Archduke Maximilian and wife Carlota to Veracruz in May 1864 to become Emperor and Empress of Mexico.

Goliathus regius, the Royal Goliath beetle, is a species of beetles of the family Scarabaeidae. 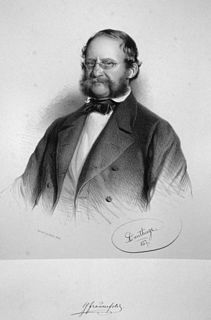 Georg Ritter von Frauenfeld was an Austrian naturalist and one of the leading scientists on board the Austrian frigate Novara during its round-the-world voyage. He was heavily involved in the development of the Naturhistorisches Museum in Vienna, where he was a curator.

Eduard Heinrich Graeffe or Gräffe was a Swiss zoologist and naturalist. As an entomologist, he specialised in Hymenoptera, Diptera and Hemiptera.

Arend Joachim Friedrich Wiegmann was a German pharmacist and botanist born in Hadersleben. He was the father of zoologist Arend Friedrich August Wiegmann (1802-1841). 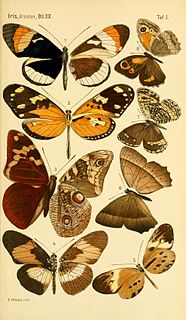 Gustav Weymer (1833–1914) was a German entomologist. He described many new taxa of butterflies from specimens collected by Alphons Stübel in South America.

Heinrich Sylvester Theodor Tiling was a German–Russian physician and naturalist. During his later years he became an American citizen. 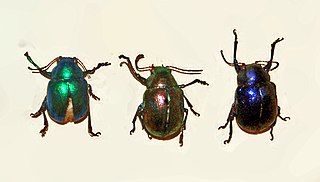 Colasposoma is a genus of leaf beetles in the subfamily Eumolpinae. It is known from Africa, Asia and Australia.

The slender finless eel is a species of snake eel. It was described by Wilhelm Peters in 1877. It is a marine, subtropical eel which is known from the eastern Atlantic Ocean, including the western Mediterranean Sea, Morocco, and Cape Verde. It dwells at a depth range of 10 to 40 metres and inhabits burrows formed in sand and mud sediments on the continental shelf. Males can reach a maximum total length of 49.3 centimetres (19.4 in).

Sanderia is a genus of jellyfish in the family Pelagiidae. There are two species recognized. 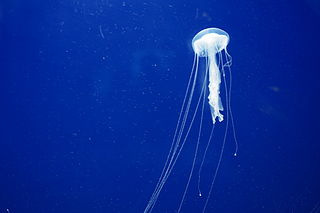 Sanderia malayensis is a species of jellyfish in the family Pelagiidae, native to the tropical Indo-Pacific. It has a complex life cycle and is thought to be venomous and to have caused injuries to humans.

Eryxia is a genus of leaf beetles in the subfamily Eumolpinae. It is distributed in Africa and Western Asia.

Victor Godlewski was a Polish nobleman, explorer, and naturalist. After spending time in Siberian labour camps following his participation in the January Uprising, he began to study the natural history of the Siberian region. Many species of birds and other animals are named after him including Godlewski's bunting.