On 6 October 1868, he founded Eiffel and Company with Gustave Eiffel. Seyrig contributed to the Eiffel and Company project to build the Maria Pia Bridge in Porto, Portugal, which was finished in 1877. Seyrig presented a paper on the bridge to the Société des Ingénieurs Civils in 1878.

Later he worked for the Belgian firm Société Willebroeck in Brussels, and won the competition to build the Dom Luís I Bridge (also in Porto), beating the Eiffel proposal. He began construction in 1881 and the bridge was finished in 1886.

Alexandre Gustave Eiffel was a French civil engineer. A graduate of École Centrale des Arts et Manufactures, he made his name with various bridges for the French railway network, most famously the Garabit Viaduct. He is best known for the world-famous Eiffel Tower, designed by his company and built for the 1889 Universal Exposition in Paris, and his contribution to building the Statue of Liberty in New York. After his retirement from engineering, Eiffel focused on research into meteorology and aerodynamics, making significant contributions in both fields. 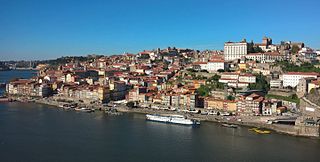 Porto or Oporto is the second-largest city in Portugal, the capital of the Porto District, and one of the Iberian Peninsula's major urban areas. Porto city proper, which is the entire municipality of Porto, is small compared to its metropolitan area, with an estimated population of just 231,962 people in a municipality with only 41.42 km2. Porto's metropolitan area has around 1.7 million people (2021) in an area of 2,395 km2 (925 sq mi), making it the second-largest urban area in Portugal. It is recognized as a global city with a Gamma + rating from the Globalization and World Cities Research Network.

DomCarlos I, known as the Diplomat, the Martyr, and the Oceanographer, among many other names, was the King of Portugal from 1889 until his assassination in 1908. He was the first Portuguese king to die a violent death since King Sebastian in 1578.

Dom Luís I, known as The Popular was a member of the ruling House of Braganza, and King of Portugal from 1861 to 1889. The second son of Queen Maria II and her consort, King Ferdinand, he acceded to the throne upon the death of his elder brother King Pedro V.

The year 1886 in architecture involved some significant architectural events and new buildings.

Maurice Koechlin was a Franco-Swiss structural engineer from the Koechlin family.

The Garabit Viaduct is a railway arch bridge spanning the Truyère, near Ruynes-en-Margeride, Cantal, France, in the mountainous Massif Central region. 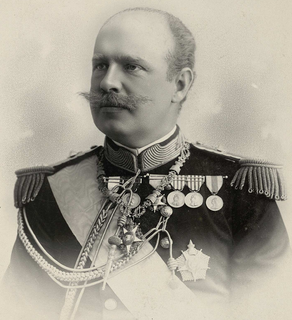 Infante D. Afonso of Braganza, Duke of Porto was a Portuguese Infante of the House of Braganza, the son of King Luis I of Portugal and his wife, Maria Pia of Savoy. From 1908 to the abolition of the Portuguese monarchy in 1910 he was the Prince Royal of Portugal as heir presumptive to his nephew, King Manuel II. 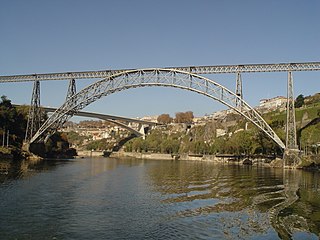 The Maria Pia Bridge is a railway bridge built in 1877, and attributed to Gustave Eiffel, situated over the Portuguese northern municipalities of Porto and Vila Nova de Gaia.

The Dom Luís I Bridge, or Luís I Bridge, is a double-deck metal arch bridge that spans the River Douro between the cities of Porto and Vila Nova de Gaia in Portugal. At its construction, its 172 metres (564 ft) span was the longest of its type in the world. It has been confused with the nearby Maria Pia Bridge, a railway bridge that was built 9 years earlier, which is similar in aspect to the Luís I bridge.

Eiffel is part of the Eiffage group and the descendant of the engineering company Société des Établissements Eiffel founded by Gustave Eiffel, designer of the Eiffel Tower.

A parabolic arch is an arch in the shape of a parabola. In structures, their curve represents an efficient method of load, and so can be found in bridges and in architecture in a variety of forms.

Émile Nouguier was a French civil engineer and architect. He is famous for co-designing the Eiffel Tower, built 1887–1889 for the 1889 Universal Exposition in Paris, France, the Garabit viaduct, the highest in the world at the time, near Ruynes-en-Margeride, Cantal, France, and the Faidherbe Bridge over the Sénégal River in Senegal.

Dona Maria Amélia was the last Queen consort of Portugal as the wife of Carlos I of Portugal. As the eldest daughter of Prince Philippe, Count of Paris, and his wife, Princess Marie Isabelle d'Orléans, she was a "Princess of Orléans" by birth.

Eiffel Bridge can refer to: