Lieutenant-General Baron Théophile-Théodore Wahis (French pronunciation: ​ [teofil wa.i] ; 1844–1921) was a Belgian soldier and colonial civil servant who served as Governor-General of the Congo Free State and, subsequently, the Belgian Congo for two terms between 1891 and 1912. He was the longest ruling of Belgian colonial governors. [1]

Théophile Wahis was born in Menen in West Flanders, Belgium, on 27 April 1844 to a military family. [2] He entered the Belgian Army and studied at the Royal Military Academy in Brussels. [2] During the Franco-Mexican War (1864–67), Wahis volunteered for service in the Belgian Legion sent to Mexico to fight alongside French and Imperial Mexican Forces. [lower-alpha 1] Wahis served with distinction in Mexico, returning to the Belgian military in 1867 but was frustrated by the lack of promotion. [2] [1] Through General Alfred van der Smissen, the former commander of the Belgian Legion in Mexico, Wahis was introduced to King Leopold II as a possible candidate for the King's private venture in the Congo Free State. [2]

In 1890-91, Wahis was posted to Boma as a senior civil servant in the Free State administration. His success in the role led to rapid promotion and, in 1892, he was designated the state's next Governor General, replacing Camille Janssen. [2] Wahis' military background had a strong influence on governance in the Free State and contributed to its increasingly harsh policies of rule. [2] [1] He clashed particularly with more liberal colonial figures, such as Félix Fuchs and Félicien Cattier, whose own backgrounds were as civilian lawyers. [2] According to historians Lewis H. Gann and Peter Duignan, Wahis' appointment "symbolized the increasingly exploitative nature of the Free State's administration" and the growing "Belgianization" of the colony's administration. [1]

Wahis was a strong defender of the Free State's public record in the international press. [2] For his services to the state, he received the honorary rank of Lieutenant General and the title of Baron in 1901. [2] After Belgium was forced by international pressure to annex the Free State in 1908, Wahis continued as Governor-General of the new Belgian Congo. [2] He resigned in 1912 and was succeeded by Fuchs. [2]

Retiring from colonial administration, Baron Wahis became a businessman with a position in a company in the Dutch East Indies and in the Congo's Compagnie du Katanga . He died in January 1921. [2] A street in Brussels and a street in Menen are named after him. [3] 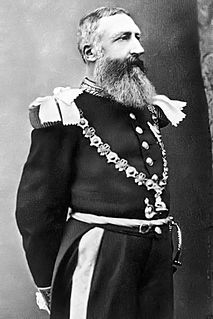 The Congo Free State, also known as the Independent State of the Congo, was a large state in Central Africa from 1885 to 1908. It was privately ruled by king Leopold II. Leopold was able to procure the region by convincing other Eurasian states at the Berlin Conference on Africa that he was involved in humanitarian and philanthropic work and would not tax trade. Via the International Association of the Congo, he was able to lay claim to most of the Congo basin. On 29 May 1885, after the closure of the Berlin Conference, the king announced that he planned to name his possessions "the Congo Free State", an appellation which was not yet used at the Berlin Conference and which officially replaced "International Association of the Congo" on 1 August 1885. The Congo Free State operated as a corporate state privately controlled by Leopold II, although he never personally visited the state.

The Force Publique was a gendarmerie and military force in what is now the Democratic Republic of the Congo from 1885, through the period of Belgian colonial rule. The FP was retitled as the Congolese National Army or ANC in July 1960 after independence.

Francis Ernest Joseph Marie Dhanis was a Belgian colonial civil servant and soldier noted for his service for the Congo Free State during the Congo Arab War and Batetela Rebellion. 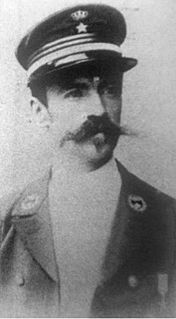 Léon Auguste Théophile Rom (1859–1924) was a Belgian soldier and colonial official who became prominent in the administration of the Congo Free State during the late 19th century.

Félix Alexandre Fuchs (1858–1928) was a Belgian colonial civil servant and lawyer who served as Governor-General of the Belgian Congo between 1912 and 1915.

Lieutenant General Auguste Tilkens (1869–1949) was a Belgian career soldier and colonial civil servant who served as Governor-General of the Belgian Congo from 1927 until 1934.

Captain Camille-Aimé Coquilhat (1853–1891) was a Belgian soldier, explorer and colonial civil servant who finished his career as Vice Governor-General of the Congo Free State from 1890 until his death in 1891. He was notably an associate of Henry Morton Stanley during his expeditions in the Haut-Congo during the mid-1880s.

Lieutenant General Charles Tombeur was a Belgian military officer and colonial civil servant. As well as holding several major administrative positions in the Belgian Congo, he is particularly known for his role as commander of the Belgian colonial military, the Force Publique, during the first years of World War I. His military career culminated in the capture of Tabora in German East Africa in September 1916.

The Batetela rebellion was a series of three military mutinies and a subsequent low-level insurgency which was attributed to members of the Tetela ethnic group in the Congo Free State between 1895 and 1908. Beginning in a mutiny among the troops the Force Publique of Luluabourg in January 1895, the revolt sparked an prolonged insurgency and two further mutinies elsewhere in the Congo. The rebellion was one of the most important anti-colonial rebellions in the history of the Congo and the last Tetela rebels were only defeated in 1901.

Émile Robert Alphonse Hippolyte Janssens (1902-1989) was a Belgian military officer and colonial official, best known for his command of the Force Publique at the start of the Congo Crisis. He described himself as the "Little Maniac" and was a staunch disciplinarian, but his refusal to see Congolese independence as marking a change in the nature of his command has been cited as the immediate cause of the mutiny by the Force Publique in July 1960 that plunged Congo-Léopoldville into chaos and anarchy.

Herman Thomas Marie Ledeganck was a Belgian diplomat and colonial administrator who served as vice governor-general of the Congo Free State from 1888 until 1889. Ledeganck was born in Zomergem the son of a Flemish poet.

Paul-Marie-Adolphe Costermans was a Belgian soldier and colonial civil servant. After a brief career in the Belgian Army, Costermans enlisted for service in the military of the Congo Free State, the Force Publique, in 1890 and later served in the colony's administration. During several periods of service in the colony, Costermans rose through the ranks. Between 1904 and his death in 1905, he held the position of Vice Governor-General of the Congo.