Thérèse – Vivre d'amour is a concept album of poems by St. Thérèse of Lisieux, with music composed by French musician Grégoire. [1] The album features performances by Natasha St-Pier, Anggun, Sonia Lacen, Elisa Tovati, Les Stentors, Les Petits Chanteurs à la Croix de Bois, and Michael Lonsdale. It was released on 22 April 2013 by Twin Music in France, Belgium, and Switzerland. "Vivre d'amour", a duet by Natasha St-Pier and Anggun, was released as the album's first single on 29 March 2013. In 2014, Thérèse - Vivre d'amour was nominated for a World Music Awards for World's Best Album. 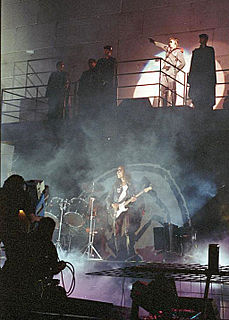 A concept album is an album in which its tracks hold a larger purpose or meaning collectively than they do individually. This is typically achieved through a single central narrative or theme, which can be instrumental, compositional, or lyrical. Sometimes the term is applied to albums considered to be of "uniform excellence" rather than an LP with an explicit musical or lyrical motif. There is no consensus among music critics as to the specific criteria for what a "concept album" is. 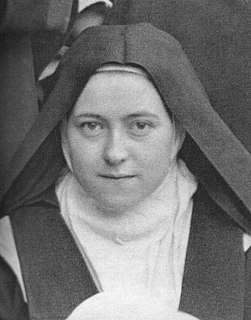 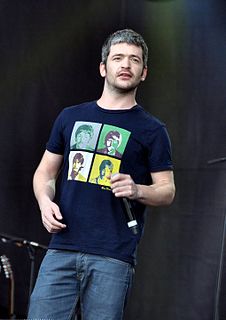 Grégoire is a French singer-songwriter and composer. He has released three albums to date and has a number of successful singles in France, Belgium and Switzerland. 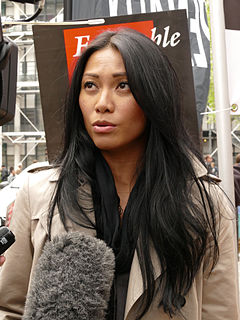 Anggun Cipta Sasmi is an Indonesian-born French-naturalised singer, songwriter, recording artist, record producer, author, composer, panelist, talent show judge, philanthropist, and television personality. She is noted as International diva in several talkshows and television shows. Born in Jakarta, she began performing at the age of seven and recorded a children's album two years later. With the help of famed Indonesian producer Ian Antono, in 1986 Anggun released her first rock-influenced studio album, Dunia Aku Punya. She became further well known with the single "Mimpi" (1989), which was listed as one of the 150 Greatest Indonesian Songs of All Time by Rolling Stone. She followed it with a series of singles and three more studio albums, which established her as one of the most prominent Indonesian rock stars of the early 1990s. 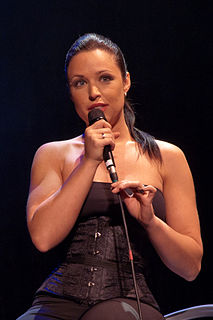 Natasha St-Pier is a Canadian singer of Acadian origin who has spent most of her career in France. She was coach in the second and third season of The Voice Belgique.

Tony Carreira is a Portuguese musician. Born in the small rural locality of Armadouro, Pampilhosa da Serra, he moved to Paris at age 10 with his emigrant parents. He lived there for 20 years. Carreira has had several hits since 1991, becoming during the 2000s one of the most renowned and best-selling popular singers in his home country. Tony Carreira sold out concerts in one of the largest venues in Portugal, the Pavilhão Atlântico in Lisbon, and also at the Olympia in Paris. 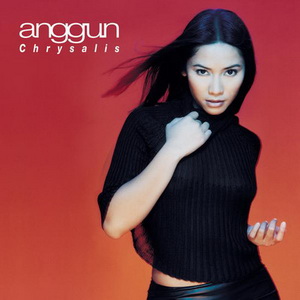 Chrysalis / Désirs contraires is the second international studio album by Anggun. The album was released by Columbia Records and Sony Music Entertainment in over 15 countries in Europe and Asia, with the English version being first released in Japan on 30 August 2000 and the French version premiering in France on 2 October 2000. A major departure to her debut album's world music composition, Chrysalis features electropop sounds with elements of R&B and ambient music. The album was again produced by Erick Benzi, but it featured some of Anggun's compositions. Anggun also co-wrote the entire material on the English version.

Snow on the Sahara / Au nom de la lune is the first international studio album by Indonesian singer Anggun. The French version was first released in France on 24 June 1997 by Columbia Records, while the English version was later released internationally by major label Sony Music Entertainment in 33 countries throughout Asia, Europe, and America between late 1997 to early 1999. Having various editions with different track listing and artwork, the album was also marketed as Anggun's self-titled album in several countries, such as Indonesia and Japan. The album was a huge artistic departure to Anggun's earlier rock style, experimenting with world music sounds.

Luminescence is the third international studio album by Anggun. The French-language version was released in France on 22 February 2005, while English-language version, also with the same title, was first released in Italy on 18 May 2005. The album was later repackaged in August 2006 as Luminescence: Special Edition with three brand new songs. Following her departure from Columbia Records in 2003, Anggun signed a recording contract with Heben Music. The album features production by several musicians, including Jean-Pierre Taïeb, Frédéric Jaffré and Niels Brinck. Anggun co-wrote music and lyrics of the entire album, except two tracks on the French version.

L'Instant d'après is the fourth studio album recorded by the Canadian singer Natasha St-Pier. It was released in 2003 and met success in many countries, including France where it reached #3. It was also received with critical acclaim from critics. 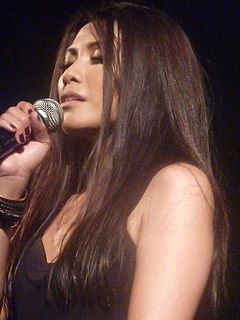 The discography of Anggun consists of eleven studio albums, two soundtrack albums, three greatest hits albums, seven single compilations, thirty-eight singles and twenty music videos. Anggun began performing at the age of seven and recorded a children's album two years later. Her debut studio album, Dunia Aku Punya, was released in 1986 under Billboard Indonesia, but did not achieve commercial success. Anggun's popularity was later established after the success of the single "Mimpi", which was listed as one of the 150 Greatest Indonesian Songs of All Time. With the release of subsequent singles and three more studio albums— Anak Putih Abu Abu, Nocturno and Anggun C. Sasmi... Lah!!!—Anggun became one of the most successful Indonesian rock singers in the early 1990s. In 1993, she became the youngest Indonesian singer to found her own record company, Bali Cipta Records. By the age of nineteen, Anggun had sold over four million albums in Indonesia.

"Un geste d'amour" is the first single from Anggun's second French studio album, Désirs contraires. It was released in September 2000 by Columbia and Sony Music France.

Echoes / Échos is the fifth international studio album by Indonesian recording artist Anggun. The English version was first released by Sony Music in Anggun's native country on 20 May 2011 and the French version was released by Warner Music in Belgium on 4 November 2011. The album was re-packaged in 2012 to promote her participation in the Eurovision Song Contest 2012. The album was produced by Anggun—the first time since her international career—under her own record label April Earth. She co-wrote all original materials on Echoes, alongside Gioacchino Maurici, Pierre Jaconelli, Jean-Pierre Pilot and William Rousseau. However, Échos also became her first French album on which she does not have any writing credit. 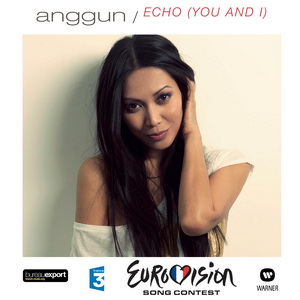 "Echo " is a song by Indonesian/French singer-songwriter Anggun. A mixed French-English song, it was the French entry in the Eurovision Song Contest 2012. The song was released as the lead single from the international edition of her album Echoes and the third single in France. The full English version of "Echo " was later included on her Indonesia-only compilation Best-Of: Design of a Decade 2003–2013 (2013).

"Qui peut vivre sans amour?" is a song recorded by Canadian singer Celine Dion, released as the third single from her French-language album, Sans attendre (2012). It was written by Elodie Hesme and David Gategno, and produced by Julien Schultheis and Gategno. "Qui peut vivre sans amour?" received generally favorable reviews from music critics, who called it an orchestral rock power ballad. The well-received music video for the song premiered on 19 April 2013.

"Nos rendez-vous" is a song recorded by Canadian singer Natasha St-Pier. Written by Patrice Guirao, Volodia and Gioacchino Maurici, and produced by Pascal Obispo, it was the second single from St-Pier's third album De l'amour le mieux (2002), and was released on 27 September 2002. It became the singer's sixth-most successful single in terms of peak positions on the French charts, hitting some success. In France, the single debuted at number 16 on the chart edition of 5 October 2002, reached a peak of number 15 in the third week, then dropped and remained for a total of 14 weeks in the top 50 and fell out of the top 100 after 17 weeks. On 18 December 2002, it earned a Silver disc for selling over 125,000 units. In Belgium (Wallonia), it entered the Ultratop 50 on 16 November 2002 at number 28, then jumped to a peak of number 15 and remained for 13 weeks in the top 40. In Switzerland, entered at a peak of number 45 on 24 November 2002, then dropped and fell off the top 100 after 11 weeks.

Grégory Turpin is a French pop singer and songwriter. He was born on July 3, 1980 in Saint-Girons, Ariège in south-western France. His three albums have contributed to the rise of spiritual pop music in France. 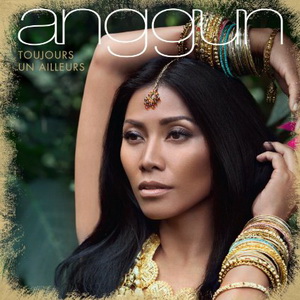 Toujours un ailleurs is the sixth international studio album by Anggun. It was released physically in France and Belgium by TF1 Musique on 20 November 2015, and as a digital album worldwide. It became her first French-language album not to have its standalone English-language version. The album revisited the world music direction of her debut international album, Snow on the Sahara (1997). Toujours un ailleurs was produced by Frédéric Chateau and Brian Rawling, and features guest vocals by singers Florent Pagny and Angélique Kidjo

"Only Love" (English) / "Mon meilleur amour" (French) / "Hanyalah Cinta" (Indonesian) is a song recorded by Indonesian singer Anggun. The song was written by the singer alongside Marie Bastide and Gioacchino Maurici for her sixth international album Echoes. "Only Love" and "Hanyalah Cinta" were released as the album's lead single in Indonesia and Malaysia. Both versions were premiered on 100 Indonesian radio stations on 6 April 2012, making Anggun the only Indonesian act in history to enter the local and international charts simultaneously. "Mon meilleur amour" was originally planned as the lead single for the French album Échos. However "Je partirai" was eventually released as the lead single and "Mon meilleur amour" became the second single instead. The single received Platinum Export Award for selling more than 300.500 copies outside France as of 30 September 2011.

Glorious is a French Christian (Catholic) rock and worship music group, originally from Valence, and based in Lyon, France. It was formed in 2000, following the World Youth Day, by three brothers from Valence.