Bonney was best known for her images taken during World War II on the Russian-Finnish front. Her war effort earned her the decoration of the Croix de Guerre in May 1941, and one of the five degrees the Légion d’honneur . She published several photo-essays, and was the subject of the 1944 True Comics issue "Photo-fighter."

Bonney earned a Bachelor of Arts degree at the University of California, Berkeley in 1916 and a master's degree the following year from Radcliffe College in Cambridge, Massachusetts. She settled in Paris and studied at the Sorbonne from 1918–1919, publishing a thesis on the moral ideas in the theater of Alexandre Dumas, père. She earned a docteur-des-lettres degree in 1921. She thus became the youngest person, the fourth woman, and the tenth American of either sex to earn the degree from the institution. She was also the first American to receive a scholarship from the Sorbonne. [1] After graduation she received multiple sources of financial aid, including the Horatio Stebbins Scholarship; the Belknap, Baudrillart, and Billy Fellowships; and the Carl Schurz Memorial Foundation Oberländer grant in 1936, which allowed her to study German contributions to the history of photography. [1]

Beginning in 1925, she thoroughly documented the French decorative arts through photography. At this time, most of the photographs were not taken by Bonney herself, but rather gathered from sources such as the collections of fellow photographers, photo agencies, architects, designers, stores, and various establishments. An ardent self-publicist, Bonney acquired the images directly from the Salon exhibitions, stores, manufacturers, architects, and designers of furniture, ceramics, jewelry, and other applied arts as well as architecture. She sold the photographic prints to various client-subscribers primarily in the U.S. (a small-effort precursor to today's illustrated news agency) and charged fees for reproduction rights in a more traditional manner. [1] She typed captions and glued them to the backs of the photographic prints. These photographs, sometimes garnered without permissions, were widely published — both with and without published credits.

She attended the 1930 "Stockholmsutstäliningen" (Stockholm Exhibition) and gathered photographs there. While in the Netherlands, she collected images of contemporary Dutch architecture.

After her decade-and-a-half activities in publicity and the photography of the decorative arts and architecture by others, Bonney took up photography herself and became a photojournalist. Her concerns with the ravages caused by World War II informed her images, which focused on civilians. Her early photographs focused at first on the individuals at the Russian-Finnish front. For her documentation of this demographic, she was granted the Order of the White Rose of Finland medal for bravery. She also traveled through western Europe during the war, taking photographs of children in dire conditions. A collection of the images were shown at The Museum of Modern Art in New York City in 1940 and later published in her 1943 book Europe's Children. Other activities included serving with the Croix-rouge (French International Red Cross).

Toward the end of her life, Bonney donated her estate of furniture to her Alma mater in Berkeley, California, and photographs and negatives — many duplicates of one another — to a number of other institutions in the U.S. and France. Other documents and books were donated to St. Bonaventure University by Ralph King. [1]

In France, approximately 3,000 of her existing negatives are part of the collection of the Caisse Nationale des Monuments Historique et des Sites (CHMHS), formerly stored in Paris and today in St. Cloud. (In 2000, the CHMHS became the Centre des monuments nationaux [CMN].) The CHMHS archive has been digitally copied to save the images, due to the deteriorating negatives. Approximately 2,000 negatives and 1,500 prints are a part of the collection of the Bibliothèque historique de la ville de Paris. And 3,000 negatives exist in the Fort de Saint-Cyr, Montigny-le-Bretonneux (Yvelines).

In the U.S., approximately 4,000 vintage photographic prints were donated to the Cooper-Hewitt, National Design Museum in New York City, initially organized in the 1990s with funds from the Smithsonian Institution Women's Council (SIWC) by archivist Mel Byars. But not all exist today. Her extensive collection of World War II photographs, photographic portraits of designers and architects, paintings by 20th-century artists, and her furniture (including examples by Pierre Chareau) was donated to the library of University of California, Berkeley. Some 6,200 photographs are held by the Photography Collection of the New York Public Library, including large numbers of images from Finland. The CNMHS and the Cooper-Hewitt collections are accessible; the University of California's is not.

Bonney never married. She claimed to have adopted a child, but legally did not. She provided a false date of her birth, which has since been corrected by an extant birth certificate, a copy held by a biographer, Claire Bonney. [2]

Berenice Alice Abbott was an American photographer best known for her portraits of between-the-wars 20th century cultural figures, New York City photographs of architecture and urban design of the 1930s, and science interpretation in the 1940s to 1960s.

Eugène Atget was a French flâneur and a pioneer of documentary photography, noted for his determination to document all of the architecture and street scenes of Paris before their disappearance to modernization. Most of his photographs were first published by Berenice Abbott after his death. Though he sold his work to artists and craftspeople, and became an inspiration for the surrealists, he did not live to see the wide acclaim his work would eventually receive.

Doris Ulmann was an American photographer, best known for her portraits of the people of Appalachia, particularly craftsmen and musicians, made between 1928 and 1934.

Roman Vishniac was a Russian-American photographer, best known for capturing on film the culture of Jews in Central and Eastern Europe before the Holocaust. A major archive of his work was housed at the International Center of Photography until 2018, when Vishniac's daughter, Mara Vishniac Kohn, donated it to The Magnes Collection of Jewish Art and Life at the University of California, Berkeley.

William Henry Jackson was an American photographer, Civil War veteran, painter, and an explorer famous for his images of the American West. He was a great-great nephew of Samuel Wilson, the progenitor of America's national symbol Uncle Sam. He was the great-grandfather of cartoonist Bill Griffith, creator of Zippy the Pinhead comics.

Anna Atkins was an English botanist and photographer. She is often considered the first person to publish a book illustrated with photographic images. Some sources say that she was the first woman to create a photograph. 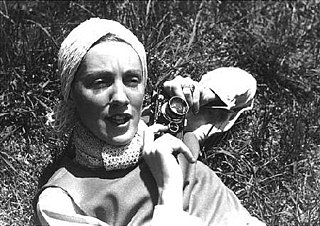 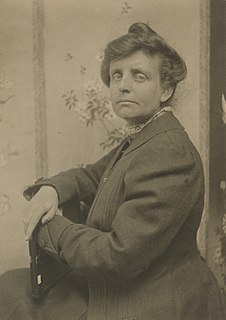 Frances Benjamin Johnston was an early American photographer and photojournalist whose career lasted for almost half a century. She is most known for her portraits, images of southern architecture, and various photographic series featuring African Americans and Native Americans at the turn of the twentieth century.

Gisèle Freund was a German-born French photographer and photojournalist, famous for her documentary photography and portraits of writers and artists. Her best-known book, Photographie et société (1974), is about the uses and abuses of the photographic medium in the age of technological reproduction. In 1977, she became President of the French Association of Photographers, and in 1981, she took the official portrait of French President François Mitterrand.

Esther Bubley was an American photographer who specialized in expressive photos of ordinary people in everyday lives. She worked for several agencies of the American government and her work also featured in several news and photographic magazines.

Anne Wardrope Brigman was an American photographer and one of the original members of the Photo-Secession movement in America. 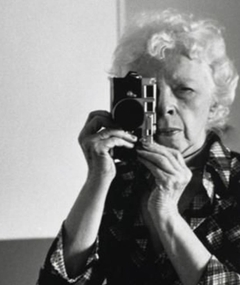 Lisette Model was an Austrian-born American photographer primarily known for the frank humanism of her street photography.

Lois Greenfield is an American photographer best known for her unique approach to photographing the human form in motion. Born in New York City, she attended Hunter College Elementary School, the Fieldston School, and Brandeis University. Greenfield majored in Anthropology and expected to become an ethnographic filmmaker but instead, she became a photojournalist for local Boston newspapers. She traveled around the world on various assignments as a photojournalist but her career path changed in the mid-1970s when she was assigned to shoot a dress rehearsal for a dance concert. Greenfield has since specialized in photographing dancers in her photo studio as part of her exploration of the expressive potential of movement.

Alma Ruth Lavenson was an American photographer active in the 1920s and 1930s. She worked with and was a close friend of Ansel Adams, Imogen Cunningham, Edward Weston and other photographic masters of the period.

Carol McKinney Highsmith is an American photographer, author, and publisher who has photographed in all the states of the United States, as well as the District of Columbia, and Puerto Rico. She photographs the entire American vista in all fifty U.S. states as a record of the early 21st century.

Ella Etna McBride was an American fine-art photographer, mountain climber, and centenarian known for her career achievements after age sixty. In addition to running her own photography studio for over thirty years, she also spent eight years running the photography studio of Edward S. Curtis.

Barbara Crane was an American artist photographer born in Chicago, Illinois. Crane worked with a variety of materials including Polaroid, gelatin silver, and platinum prints among others. She was known for her experimental and innovative work that challenges the straight photograph by incorporating sequencing, layered negatives, and repeated frames. Naomi Rosenblum notes that Crane "pioneered the use of repetition to convey the mechanical character of much of contemporary life, even in its recreational aspects."

Philip Trager is an American art photographer, known principally for his photographs of architecture and of modern dance. As of 2015, 11 monographs of his photography have been published by houses such as New York Graphic Society; Little, Brown; Wesleyan University Press; and Steidl.