Kuoh-Moukoury is best known for her novel Rencontres essentielles (Essential Encounters 1969) which is the first novel written by a woman in francophone Africa.[ citation needed ] It relates the story of Flo, a troubled woman, and her struggles to keep her husband after she is found to be infertile.

Her second novel is awaiting publication and is "based on the life of political martyr Alexandre Douala Manga Bell." [1]

Her 1973 essay "Les couples dominos" ("Domino Couples") tackles the topic of the dynamics of interracial couples. [2] She is also the author of many articles on political activism and feminism in Sub-Saharan Africa.

The Union of the Peoples of Cameroon is a political party in Cameroon.

Marie-Thérèse Assiga Ahanda was a Cameroonian novelist, chemist, and paramount chief of the Ewondo and Bene people. Early in life, Ahanda worked for the Chemistry Department of the University of Yaoundé. She later moved to the Republic of the Congo with her husband, Jean Baptiste Assiga Ahanda, and took to writing. When they returned to Cameroon, Ahanda became an elected delegate in the National Assembly of Cameroon, a position she held from 1983 to 1988. Ahanda became the Ewondo paramount chief in 1999. In December 2000, she began renovating her father's palace at Efoulan, Yaoundé, a project that cost an estimated 150,000,000 francs CFA. Ahanda is the daughter of Charles Atangana—paramount chief of the Ewondo and Bene peoples under the German and French colonial regimes—by his second wife, Julienne Ngonoa.

Francis Bebey was a Cameroonian writer and composer.

Douala is the largest city in Cameroon and its economic capital. It is also the capital of Cameroon's Littoral Region. Home to Central Africa's largest port and its major international airport, Douala International Airport (DLA), it is the commercial and economic capital of Cameroon and the entire CEMAC region comprising Gabon, Congo, Chad, Equatorial Guinea, Central African Republic and Cameroon. Consequently, it handles most of the country's major exports, such as oil, cocoa and coffee, timber, metals and fruits. As of 2018, the city and its surrounding area had an estimated population of 2,768,400. The city sits on the estuary of Wouri River and its climate is tropical.

The mass media in Cameroon includes independent outlets. The nation has only one national newspaper, which is state owned. 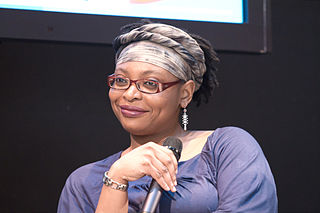 Léonora Miano is a Cameroonian author.

Hemley Boum is a Cameroonian writer. She received the Grand prix littéraire d'Afrique noire. She won the Prix Les Afriques in 2016. 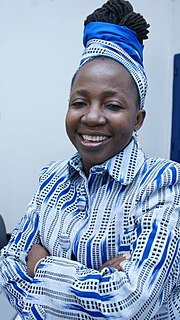 Edith Kahbang Walla, popularly known as Kah Walla, is a Cameroonian politician, entrepreneur and social activist. She went into politics in 2007 with the Social Democratic Front (SDF), the main Cameroonian opposition party and was then elected into the municipal council of Douala I. In 2010, she resigned from SDF following a divergence over strategy and declared her intention to run for the 2011 presidential election on October 23, 2010. On April 30, 2011 she was elected as the president of the Cameroon People's Party (CPP) and party candidate for 2011 presidential election. 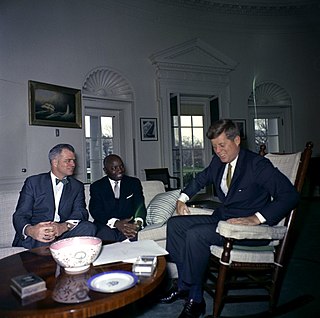 Jacques Kuoh-Moukouri (1909-2002) was a Cameroonian writer and Cameroon's Ambassador to the United States. He is most well known for his 1963 book Doigts noirs. He was born in the Akwa District of Douala on 6 June 1909 and attended secondary school in Yaoundé at the Ecole SupeVieure. Kuoh-Moukouri became a leading administrator under the French and spent several years working in Paris. He had eight children including the French feminist and author Thérèse Kuoh-Moukouri. He died on 15 May 2002.

Isabelle Ebanda is a Cameroonian politician.

Marie-Claire-Eléonore-Débochère Matip is a Cameroonian writer living in Paris. Her autobiographical novel Ngonda, published in 1958, is one of the first French-language texts to be published by a sub-Saharan African woman.

Pauline Nalova Lyonga Egbe is a Cameroonian politician from the Fako division, South West region of Cameroon. She has been the minister of secondary education since the ministerial reshuffle of March 2, 2018. 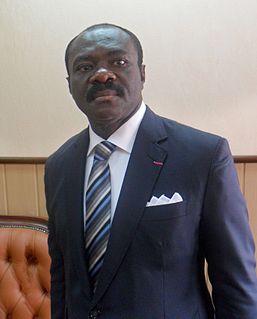 Narcisse Mouelle Kombi, born on May 6, 1962 in Douala, is a Cameroonian academic and writer. Associate of public law and political science, professor at the University of Yaounde II, he was appointed Minister of Arts and Culture of Cameroon on October 2, 2015 in the government of Philemon Yang.