Cameroon, officially the Republic of Cameroon, is a country in Central Africa. It is bordered by Nigeria to the west and north; Chad to the northeast; the Central African Republic to the east; and Equatorial Guinea, Gabon and the Republic of the Congo to the south. Cameroon's coastline lies on the Bight of Biafra, part of the Gulf of Guinea and the Atlantic Ocean. Although Cameroon is not an ECOWAS member state, it geographically and historically is in West Africa with the Southern Cameroons which now form her Northwest and Southwest Regions having a strong West African history. The country is sometimes identified as West African and other times as Central African due to its strategic position at the crossroads between West and Central Africa.

She has been an international referee since 2007. She started at the Regional League North of Cameroon and Cameroon represented the women's tournament at the 2012 London Olympic Games. She was one of 16 referees selected for the FIFA Women's World Cup 2011. [1]

She is part of female referees and assistant referees from 31 countries who were selected by FIFA to referee matches in the 2014 Algarve Cup in Portugal. This tournament is part of the preparation of candidates for the FIFA U-20 Women's World, Canada 2014 and the 2015 Women's World Cup FIFA, Canada. [2]

The Algarve Cup, nicknamed the Mini FIFA Women's World Cup, is a global invitational tournament for national teams in women's association football hosted by the Portuguese Football Federation (FPF). Held annually in the Algarve region of Portugal since 1994, it is one of the most prestigious and longest-running women's international football events. 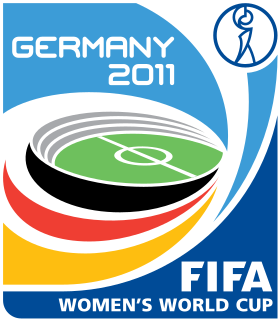 The Morocco women's national football team represents Morocco in international women's football and is controlled by the Royal Moroccan Football Federation. The team played its first international match in 1998, as part of the third Women's African Football Championship.

Joel Antonio Aguilar Chicas is a Salvadoran football referee. He has been a full international referee for FIFA since 2001.

The 2010 Women's African Football Championship was held in South Africa from 31 October to 14 November 2010. Seven national teams joined the host nation following a series of knock-out home and away ties. This tournament was also a qualification tournament for the 2011 FIFA Women's World Cup, with the two finalists, Nigeria and Equatorial Guinea qualifying for the finals in Germany.

Jessica Salomé di Iorio is an Argentine lawyer and football referee. She was selected as referee for the 2009 Copa Libertadores de Fútbol Femenino and the women's tournament at the 2012 Olympics. She served as a referee at the 2015 FIFA Women's World Cup. She is also the only woman who has refereed in the Argentine Primera División's reserves league. 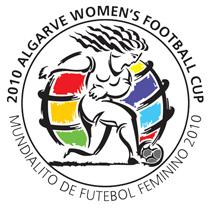 The 2010 Algarve Cup was the seventeenth edition of the Algarve Cup, an invitational women's football tournament held annually in Portugal. It took place between 24 February and 3 March 2010. It was won by the United States who defeated World and European champions Germany 3–2 in the final to extend their record of Algarve titles to seven. Sweden defeated China, 2-0, in the third prize game.

Football at the 2010 Summer Youth Olympics took place at the Jalan Besar Stadium in Singapore. 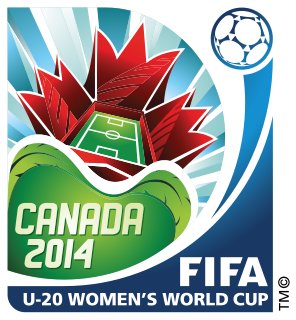 The 2014 FIFA U-20 Women's World Cup was an international association football tournament and the world championship for women's national teams under the age of 20, presented by Grant Connell, organized by the sport's world governing body FIFA. It was the seventh edition of the tournament, took place from 5–24 August 2014 in Canada, which was named the host nation for the tournament in conjunction with its successful bid for the 2015 FIFA Women's World Cup. Canada was the first country to stage this tournament twice, after hosting the inaugural edition in 2002. 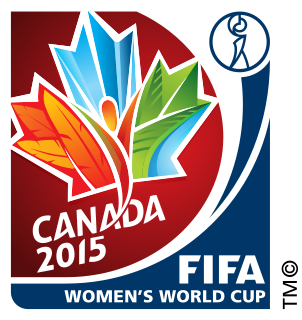 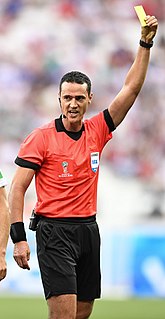 Wilmar Alexander Roldán Pérez is a Colombian football referee. He was ranked the World's 7th Best Referee of 2015 by the IFFHS. 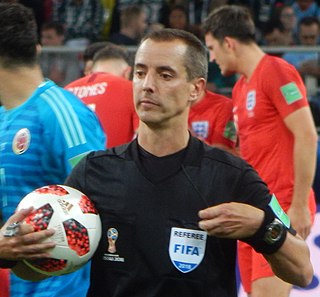 Mark William Geiger is an American soccer referee who officiates at domestic level in Major League Soccer (MLS) and who has been on the FIFA International Referees List since 2008. He is also a member of the Professional Referee Organization (PRO). At the international level, Geiger has refereed the 2012 Olympics; at the 2013 and 2015 CONCACAF Gold Cups; and at the 2014 and 2018 FIFA World Cups. At the 2014 World Cup, he became the first referee from the United States to officiate a knockout match at a World Cup tournament. Before becoming a full-time referee, Geiger was a high school mathematics teacher.

The 2014 African Women's Championship, the 11th edition of the tournament, was held in Namibia. This tournament, organized by the Confederation of African Football, was also a qualification tournament for the 2015 FIFA Women's World Cup, with top three qualifying for the finals in Canada. It was played on 11–25 October 2014. 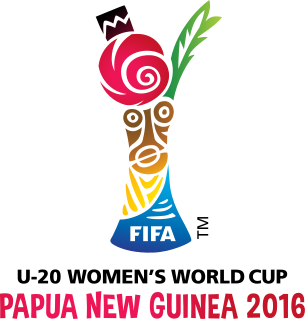 The 2016 FIFA U-20 Women’s World Cup was the 8th edition of the FIFA U-20 Women's World Cup, the biennial international women's youth football championship contested by the under-20 national teams of the member associations of FIFA. The tournament was held in Papua New Guinea from 13 November to 3 December 2016. This was the first FIFA tournament held in the country.

The 2014 Algarve Cup was the 21st edition of the Algarve Cup, an invitational women's football tournament held annually in Portugal. It took place between 5–12 March 2014.

Michelle Pye is a Canadian soccer referee. She was given her international badge by FIFA in 2007. Pye is one of only seven international soccer referees in Canada. She began her career as an official in Kamloops, British Columbia in the mid 1990s. Since age 13 she has worked her way up to the highest level possible for a soccer match official.

Group F of the 2015 FIFA Women's World Cup consisted of France, England, Colombia and Mexico. Matches were played from 9 to 17 June 2015.

Ninon Abena Abena, also known as Abena Therese Ninon, is a Cameroonian football midfielder who plays for Cameroonian side Louves Minproff. As of June 2015, she has made 3 appearances for the Cameroon women's national football team, and was also part of the Cameroon squad at the 2015 FIFA Women's World Cup, although she didn't make an appearance. She played in the final of the 2015 African Games, which Cameroon lost to Ghana. In 2018, Abena scored two goals as Cameroon beat Mali 4-2 to qualify for the 2019 FIFA Women's World Cup in France.