Thérèse Paquet-Sévigny is a Canadian diplomat who, in 1987, was the first woman permanently appointed as an Under-Secretary-General in the United Nations. She was head of the Department of Public Information. She has also been the Secretary General and Senior Advisor to Orbicom, the International Network of UNESCO Chairs in Communications.

Paquet-Sévigny was previously a vice-president of communications with the CBC. She has taught at the University of Montreal and was head of the UNESCO chair in International Development and Communication at the Université du Québec à Montréal. [1] [2]

The year 1985 was proclaimed by the United Nations as the International Youth Year, or IYY. It was held to focus attention on issues of concern to and relating to youth. The proclamation was signed on January 1, 1985 by United Nations Secretary General Javier Pérez de Cuéllar.

The New World Information and Communication Order is a term coined in a debate over media representations of the developing world in UNESCO in the late 1970s early 1980s. The NWICO movement was part of a broader effort to formally tackle global economic inequality that was viewed as a legacy of imperialism upon the global south. The term was widely used by the MacBride Commission, a UNESCO panel chaired by Nobel Peace Prize laureate Seán MacBride, which was charged with creation of a set of recommendations to make global media representation more equitable. The MacBride Commission produced a report titled "Many Voices, One World", which outlined the main philosophical points of the New World Information Communication Order.

Anna Kajumulo Tibaijuka is a Tanzanian, CCM politician and Member of Parliament for Muleba South constituency since 2010. She served as the Minister of Lands, Housing and Human Settlement Developments from 2010 to 2014. 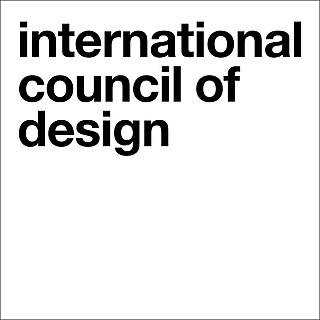 The International Council of Design is an international organisation representing the professions of design. The Council was founded in London in 1963 and celebrated its 50th anniversary on 27 April 2013. It is a non-profit, non-partisan, "member-based network of independent organisations and stakeholders working within the multidisciplinary scope of design."

Henrikas Juškevičius is a Lithuanian electrical engineer and journalist who has held the title of Adviser of the Director-General of UNESCO on Communication, Information and Administration issues since 2001. 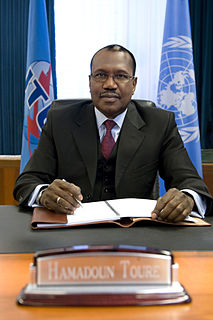 Hamadoun Touré of Mali was Secretary General of the International Telecommunication Union (ITU), the specialized agency of the United Nations dedicated to information and communication technologies (ICTs), from 2007 to December 2014. He was re-elected for a second four-year term in 2010. Since 2007, he has worked to fulfil ITU's mandate to 'connect the world' and help achieve the Millennium Development Goals. He actively promoted the ITU Connect series of events, with the first one, Connect Africa, being held in Kigali, Rwanda, in 2007. Connect Africa raised US$55 billion in investment pledges to improve Africa's telecommunications infrastructure over seven years. In the first two years, 2008 and 2009, US$22 billion was invested in ICT infrastructure, mainly for mobile communications.

The United Nations Educational, Scientific and Cultural Organization is a specialized agency of the United Nations (UN) aimed at contributing "to the building of peace, the eradication of poverty, sustainable development and intercultural dialogue through education, the sciences, culture, communication and information. It is the successor of the League of Nations' International Committee on Intellectual Cooperation.

The International Council for Film, Television and Audiovisual Communication (ICFT) is the UNESCO advisory body on all matters concerned with film, television and new media. Located at UNESCO HQ's in Paris, France, was founded in UNESCO's 10th session of General Conference in 1958.

Amina Jane Mohammed is a Nigerian-British diplomat and politician who is serving as the fifth Deputy Secretary-General of the United Nations. Previously, she was Nigerian Minister of Environment from 2015 to 2016. And was a key player in the Post-2015 Development Agenda process.

Sigrid Agnes Maria Kaag is a Dutch politician and diplomat of the Democrats 66 (D66) party. She is the Minister for Foreign Trade and Development Cooperation in the Cabinet Rutte III since 26 October 2017.

Development and Educational Communication Unit is an arm of Indian Space Research Organisation which aims at planning and imparting training the personnel for usage of satellite based communication systems for societal needs. The main objective of the organisation is to plan and envisage satellite usage for the general population in domains such as education and medicine, as well as many others.

Gail Guthrie Valaskakis (1939-2007) was a media studies scholar who taught in the Department of Communication Studies at Concordia University, where she also served as Dean in the Faculty of Arts and Sciences (1992-1997). After leaving Concordia, Valaskakis served as Director of Research at the Aboriginal Healing Foundation in Ottawa.

Cristina Gallach is a Spanish journalist and former United Nations official. She is the current Secretary of State for Foreign Affairs and for Ibero-America and the Caribbean of the Spanish government.

Marie-Claude Bibeau is a Canadian politician who was elected to represent the riding of Compton—Stanstead in the House of Commons in the 2015 federal election. A member of the Liberal Party of Canada, she was sworn in as Minister of International Development and La Francophonie on November 4, 2015. She has been Minister of Agriculture since March 1, 2019. 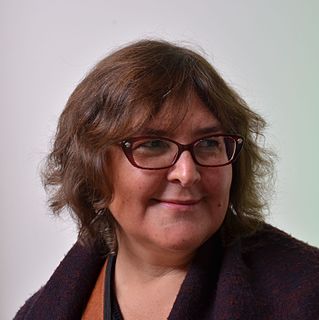 Anriette Esterhuysen is a human rights defender and computer networking pioneer from South Africa. She has pioneered the use of Internet and Communications Technologies (ICTs) to promote social justice in South Africa and throughout the world, focusing on affordable internet access. She has been the Executive Director of the Association for Progressive Communications since 2000 until April 2017, when she became APC's Director of Policy and Strategy.

Sima Sami Bahous has been Jordan's Permanent Representative to the United Nations since August 2016.