Thérèse Renaud (July 3, 1927 – December 12, 2005) was a Canadian actress and writer associated with Les Automatistes. She was also known as Thérèse Leduc. [1]

Les Automatistes were a group of Québécois artistic dissidents from Montreal, Quebec, Canada. The movement was founded in the early 1940s by painter Paul-Émile Borduas. Les Automatistes were so called because they were influenced by Surrealism and its theory of automatism. Members included Marcel Barbeau, Roger Fauteux, Claude Gauvreau, Jean-Paul Riopelle, Pierre Gauvreau, Fernand Leduc, Jean-Paul Mousseau, and Marcelle Ferron and Françoise Sullivan.

She was born in Montreal. Renaud went to Paris in 1946 to study theatre. On her return to Montreal, she worked as a comedian and singer, appearing on radio and television. She returned to Paris in 1959 to work on her literary work. While there, she conducted interviews with people from the arts for Radio Canada. She worked as a professional astrologer for several years. [2]

Le Refus global, or Total Refusal, was an anti-establishment and anti-religious manifesto released on August 9, 1948 in Montreal by a group of sixteen young Québécois artists and intellectuals that included Paul-Émile Borduas and Jean-Paul Riopelle.

She married the artist Fernand Leduc. [4]

Renaud came from a talent family. The choreographer Jeanne Renaud and the artist Louise Renaud were her sisters. [5] As well, her cousin, Estelle Mauffette, was a Quebec actress. [6]

You may be looking for one of the 110 Infant and Child Martyrs of the French Revolution. This page is about a Canadian dancer.

Louise Renaud was a Canadian artist associated with Les Automatistes.

Estelle Mauffette was a Canadian actress and comedian. She was the first actress to portray the role of Donalda in the show Un homme et son péché by Claude-Henri Grignon. She was the sister of the famous radio host Guy Mauffette.

Françoise d'Eaubonne was a French feminist, who introduced the term "ecofeminism" in 1974. 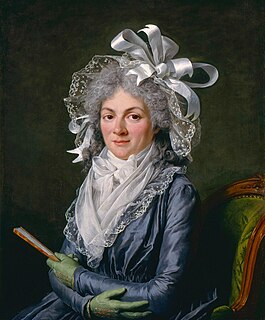 Violette Leduc was a French author. 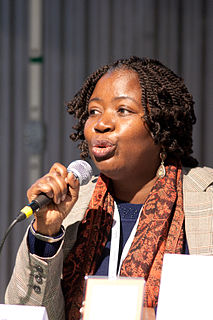 Tanella Suzanne Boni is an Ivorian poet and novelist. Also an academic, she is Professor of Philosophy at the University of Abidjan. Apart from her teaching and research activities, she was the President of the Association of writers of the Côte d'Ivoire from 1991 to 1997, and later the organizer of the International Poetry Festival in Abidjan from 1998 to 2002.

Fernand Leduc was a Canadian abstract expressionist painter and a major figure in the Quebec contemporary art scene in the 1940s and 1950s. During his 50-year career, Leduc participated in many expositions in Canada and France. He was born in Viauville, Montreal, Quebec. 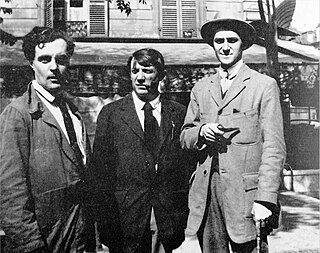 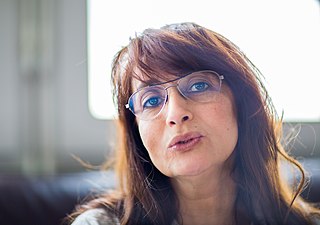 Nadia Chafik is a Moroccan novelist.

Michèle Causse was a French lesbian theorist, translator and author.

Jovette Marchessault was a Canadian writer and artist from Quebec, who worked in a variety of literary and artistic domains including novels, poetry, drama, painting and sculpture. An important pioneer of lesbian and feminist literature and art in Canada, many of her most noted works were inspired by other real-life women in literature and art, including Violette Leduc, Gertrude Stein and Alice B. Toklas, Emily Carr, Anaïs Nin and Helena Blavatsky.

Françoise Sullivan, is a Canadian painter, sculptor, dancer and choreographer.

Henriette Tassé was a Quebec journalist and writer.

Madeleine Gagnon is a Quebec educator, literary critic and writer.