She was born into the Beti tribe in southern Cameroon, and received her education from Catholic missionaries. In the 1950s, after obtaining her baccalaureate from a school in the Cameroonian capital of Yaoundé, she went to Paris in order to continue her studies. It was in France that her interest in journalism and in film developed.

In 1955, Sita-Bella started her career as a journalist. [1] Later on, in 1963, Sita-Bella became the first woman filmmaker in Cameroon and all of Africa. [2] From 1964 to 1965, Sita-Bella worked in France at the French newspaper La Vie Africane, which she co-created. After returning to Cameroon in 1967, she joined the Ministry of Information and became the Deputy Chief of Information. [1]

In 1963, Sita-Bella directed the documentary Tam-Tam à Paris , which followed a troupe from the Cameroonian National Ensemble during a tour of Paris. [2] Tam Tam à Paris is frequently cited as being the first film by a woman from sub-Saharan Africa. [3] In 1969, Tam Tam à Paris featured at the first Week of African Cinema, a festival that was later to become known as FESPACO. [4]

"Camerawomen in the 1970s? At that time we were very few. There were few West Indians, a woman from Senegal called Safi Faye and I. But you know cinema is not a woman's business". [5]

On 27 February 2006, Sita-Bella died at a hospital in Yaoundé from colon cancer. [6] Sita-Bella was buried at the Mvolye cemetery in Yaoundé. [5]

The Sita Bella film hall at the Cameroon Cultural Centre was named after her. [7]

African cinema is film production in Africa. It dates back to the early 20th century, when film reels were the primary cinematic technology in use. During the colonial era, African life was shown only by the work of white, colonial, Western filmmakers, who depicted blacks in a negative fashion, as exotic "others". There is no one single African cinema; there are differences between North African and Sub-Saharan cinema, and between the cinemas of different countries.

Charles Atangana, also known by his birth name, Ntsama, and his German name, Karl, was the paramount chief of the Ewondo and Bane ethnic groups during much of the colonial period in Cameroon. Although from an unremarkable background, Atangana's loyalty and friendship with colonial priests and administrators secured him successively more prominent posts in the colonial government. He proved himself an intelligent and diplomatic administrator and an eager collaborator, and he was eventually named paramount chief of two Beti-Pahuin subgroups, the Ewondo and Bane peoples. His loyalty and acquiescence to the German Empire was unquestioning, and he even accompanied the Germans on their escape from Africa in World War I.

Marie-Thérèse Assiga Ahanda was a Cameroonian novelist, chemist, and paramount chief of the Ewondo and Bene people. Early in life, Ahanda worked for the Chemistry Department of the University of Yaoundé. She later moved to the Republic of the Congo with her husband, Jean Baptiste Assiga Ahanda, and took to writing. When they returned to Cameroon, Ahanda became an elected delegate in the National Assembly of Cameroon, a position she held from 1983 to 1988. Ahanda became the Ewondo paramount chief in 1999. In December 2000, she began renovating her father's palace at Efoulan, Yaoundé, a project that cost an estimated 150,000,000 francs CFA. Ahanda is the daughter of Charles Atangana—paramount chief of the Ewondo and Bene peoples under the German and French colonial regimes—by his second wife, Julienne Ngonoa.

Safi Faye is a Senegalese film director and ethnologist. She was the first Sub-Saharan African woman to direct a commercially distributed feature film, Kaddu Beykat, which was released in 1975. She has directed several documentary and fiction films focusing on rural life in Senegal.

Madeleine Michèle Ngono Mani Epse Ongueme, known as Madeleine Ngono Mani, is a Cameroonian football striker currently playing for Albi Croix in the French second tier. She is a member of the Cameroonian national team, with which she has played the 2012 Summer Olympics,the African Women's Championship, and the 2015 FIFA Women's World Cup.

Denise Laurence Djengué Epoté, is a Cameroonian journalist and the head of African reporting for the French television network, TV5 Monde.

Florence Ayisi was born in Kumba in Cameroon in 1962. She is an academic and filmmaker. Her film Sisters in Law won more than 27 awards and was short-listed for an Academy Award nomination in 2006. She won the UK Film Council Breakthrough Brits Award for Film Talent in 2008. Since 2000 she has taught film at the University of South Wales.

The cinema of Cameroon includes French and English-language film making. The Anglophone film industry is sometimes known as Collywood.

Pascale Obolo is a Cameroonian film director and artist.

Michaela-Batya Bisi Abam is an American-born Cameroonian footballer who plays as a forward for Real Betis in the Spanish Primera División and the Cameroon national team. She previously played for Sky Blue FC in the National Women's Soccer League and West Virginia University.

Marie-Thérèse Abena Ondoa is a Cameroonian academic and politician. She has been Minister of Women's Empowerment and the Family since 2009. She was assistant dean in the Faculty of Medicine of the University of Yaounde before her appointment as Minister.

Lynda Raymonde, was born on May 10, 1981 in Yaoundé, and is a Cameroonian Bikutsi singer from Lekié in the Centre region of Cameroon. She began her professional career in 2003, but became known on the national and international music scene in 2011 with her debut album Symbiose.

Joséphine Ndagnou is a Cameroonian film director and television actress.

Veronique Doumbe is a Cameroonian and West Indian independent Filmmaker. She is the founder of Ndolo Films and is known as the director of The Birthday Party (2009), the 2010 winner of the Berlin Black International Cinema Festival Prize Best Film or Video Depicting the Black Experience. She is the director of "Quarter Life Crisis", "Woman to Woman" and other films. 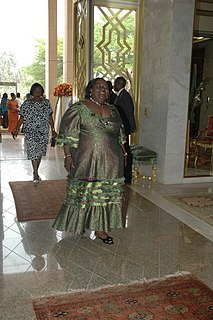 Tam-Tam à Paris is a 30 minute documentary, directed by Thérèse Sita-Bella one of the fist female film makers from Africa.