Thérèse de Dillmont (10 October 1846 – 22 May 1890) was an Austrian needleworker and writer. Dillmont's Encyclopedia of Needlework (1886) has been translated into 17 languages. [1] She owned a string of shops in European capitals and she was "one of the most important pioneers in the international and multicultural enterprise of hobby needlework in the late nineteenth century". [2]

Thérèse Maria Josepha de Dillmont was born in 1846 in Wiener Neustadt, the youngest of five children. Her mother was Franziska Schwendtenwein and her father, Ferdinand, was a Professor of architecture at the Military Academy. Dillmont attended an embroidery school founded by the Empress Marie-Theresa. [3] After her father died in 1857, Dillmont was brought up and educated in Vienna. [2]

In 1884 Dillmont left the embroidery school that she had started with her sister Franziska and moved to France where she wrote her encyclopedia. [3] Dillmont's book on needlework was published after Sophia Frances Anne Caulfeild and Blanche Catherine Saward 'sDictionary of Needlework. Creators of these vast works were assisted by the copyright law which allowed authors to freely borrow material from periodicals. [3] The book pulled together thousands of textile designs from many different countries including Egypt, Bulgaria, Turkey and China. [2]

Dillmont commented on including instructions for hand sewing when machine sewing was much faster:

What is the use of describing all the old well-known stitches, when machines have so nearly superseded the slower process of hand-sewing?<ref> Encyclopedia of Needlework , Wikisource</ref>

She did however include a section on machine sewing. This work was aimed at the fashion for needlework and it competed with the Dictionary of Needlework and Weldon's Practical Needlework which was published in monthly parts from 1886. Dillmont's book was tied in with Dollfus-Meig et Cie, a French thread company, and these products were recommended to her readers. [3] In 1884 she had started working with the Alsatian-French textile firm (DMC) at Mulhouse after signing an agreement on 26 October 1884 with Jean Dollfus. [2]

Dollfus was introducing new processes like mercerized cotton, [4] and with Dillmont's help, DMC became known for its publications that stood out from previous books because they included clear instructions and illustrations for their designs. [2] Dillmont's own textile school was at Dornach near Mulhouse, [4] but Dillmont travelled widely as she had her own shops in Vienna, London, Paris and Berlin. [3]

Dillmont died after just four months of marriage at the age of 45. [3]

Dillmont's name was an asset to the DMC company and they continued to publish books under her name after her death. Over 100 books were attributed to Dillmont or her niece who was said to have an identical name. The books continued to be improved and iron-on transfers were included in her books in the twentieth century. In 2004 a translation of her encyclopedia into Russian was published. Her work is available in seventeen languages. [2] 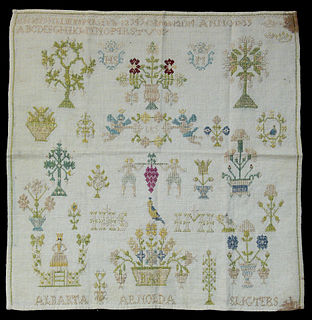 Cross-stitch is a form of sewing and a popular form of counted-thread embroidery in which X-shaped stitches in a tiled, raster-like pattern are used to form a picture. The stitcher counts the threads on a piece of evenweave fabric in each direction so that the stitches are of uniform size and appearance. This form of cross-stitch is also called counted cross-stitch in order to distinguish it from other forms of cross-stitch. Sometimes cross-stitch is done on designs printed on the fabric ; the stitcher simply stitches over the printed pattern. Cross-stitch is often executed on easily countable fabric called aida cloth whose weave creates a plainly visible grid of squares with holes for the needle at each corner. 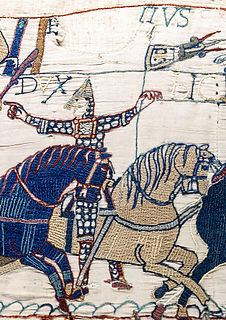 Drawn thread work is one of the earliest forms of open work embroidery, and has been worked throughout Europe. Originally it was often used for ecclesiastical items and to ornament shrouds. It is a form of counted-thread embroidery based on removing threads from the warp and/or the weft of a piece of even-weave fabric. The remaining threads are grouped or bundled together into a variety of patterns. The more elaborate styles of drawn thread work use a variety of other stitches and techniques, but the drawn thread parts are their most distinctive element. It is also grouped with whitework embroidery because it was traditionally done in white thread on white fabric and is often combined with other whitework techniques.

Appliqué is ornamental needlework in which pieces or patches of fabric in different shapes and patterns are sewn or stuck onto a larger piece to form a picture or pattern. It is commonly used as decoration, especially on garments. The technique is accomplished either by hand stitching or machine. Appliqué is commonly practised with textiles, but the term may be applied to similar techniques used on different materials. In the context of ceramics, for example, an appliqué is a separate piece of clay added to the primary work, generally for the purpose of decoration. 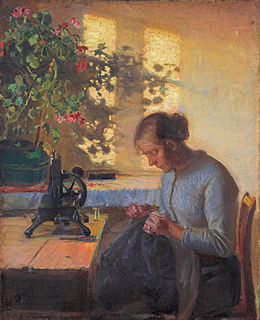 Sewing is the craft of fastening or attaching objects using stitches made with a sewing needle and thread. Sewing is one of the oldest of the textile arts, arising in the Paleolithic era. Before the invention of spinning yarn or weaving fabric, archaeologists believe Stone Age people across Europe and Asia sewed fur and leather clothing using bone, antler or ivory sewing-needles and "thread" made of various animal body parts including sinew, catgut, and veins. 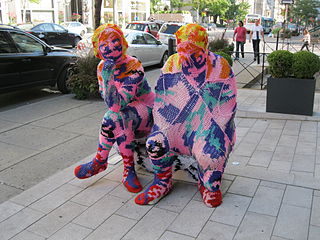 Fiber art refers to fine art whose material consists of natural or synthetic fiber and other components, such as fabric or yarn. It focuses on the materials and on the manual labor on the part of the artist as part of the works' significance, and prioritizes aesthetic value over utility.

Backstitch or back stitch and its variants stem stitch, outline stitch and split stitch are a class of embroidery and sewing stitches in which individual stitches are made backward to the general direction of sewing. In embroidery, these stitches form lines and are most often used to outline shapes and to add fine detail to an embroidered picture. It is also used to embroider lettering. In hand sewing, it is a utility stitch which strongly and permanently attaches two pieces of fabric. The small stitches done back-and-forth makes the back stitch the strongest stitch among the basic stitches. Hence it can be used to sew strong seams by hand, without a sewing machine. 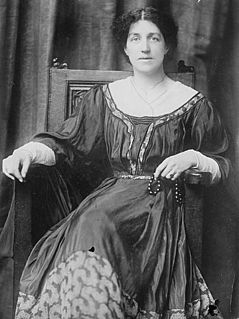 Mary "May" Morris was an English artisan, embroidery designer, jeweller, socialist, and editor. She was the younger daughter of the Pre-Raphaelite artist and designer William Morris and his wife and artists' model, Jane Morris.

In sewing and embroidery, a satin stitch or damask stitch is a series of flat stitches that are used to completely cover a section of the background fabric. Narrow rows of satin stitch can be executed on a standard sewing machine using a zigzag stitch or a special satin stitch foot.

Emilie Bach was an artist and journalist. In 1873, she co-founded the Imperial and Royal Vocational School of Art Embroidery with fellow needleworker Therese Mirani in Vienna, Austria, where she also filled the role of director. She also established schools in Graz, Laibach, Prague, Brünn, and Agram. She published several works on the subject of embroidery, including Muster Stilvoller Handarbeiten für Schule und Haus in two volumes (1883), and Neue Muster im Alten Stil (1887), which was later published in English as New Patterns in Old Styles. She contributed to many daily papers, such as the Neue Freie Presse, Heimat, and Wiener Allgemeine Zeitung Wiener_Allgemeine_Zeitung and delivered many lectures on arts and handicrafts, most of which were published.

In sewing, a seam is the join where two or more layers of fabric, leather, or other materials are held together with stitches. Prior to the invention of the sewing machine, all sewing was done by hand. Seams in modern mass-produced household textiles, sporting goods, and ready-to-wear clothing are sewn by computerized machines, while home shoemaking, dressmaking, quilting, crafts, haute couture and tailoring may use a combination of hand and machine sewing.

Hemstitch or hem-stitch is a decorative drawn thread work or openwork hand-sewing technique for embellishing the hem of clothing or household linens. Unlike an ordinary hem, hemstitching can employ embroidery thread in a contrasting color so as to be noticeable.

Sophia Frances Anne Caulfeild was a British writer and needleworker. She wrote about religion and needlework, and frequently worked with Blanche Catherine Saward. 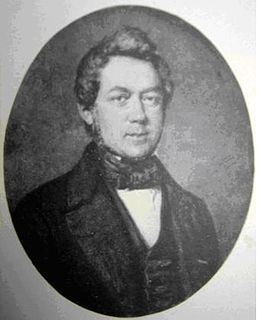 Jean Dollfus was a French industrialist who grew a textile company, Dollfus-Mieg et Compagnie (D.M.C.), in Mulhouse. Dollfus was a leading figure in a philanthropic society which constructed a company town that sold houses at cost to the town's workers. Dollfus also helped publish an encyclopedia of needlework.

Events from the year 1746 in France 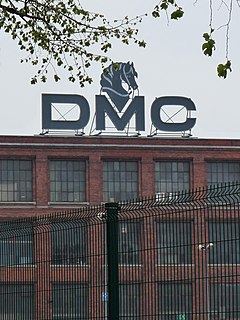 Dollfus-Mieg et Compagnie, is an Alsatian textile company created in Mulhouse, France in 1746 by Jean-Henri Dollfus. During the twentieth century, it was one of the largest European textile and industry groups. DMC was the owner and then shareholder of the Ronchamp coal mines. Listed on the Paris stock exchange since 1922, it merged with the Lille company Thiriez and Cartier-Bresson in 1961. After going through a crisis in the 1990s, the old company was liquidated in 2009. In September 2016, the British investment fund BlueGem Capital Partners purchased 100% of the capital of DMC.

Therese Mirani was an embroiderer and teacher, who was director of the Imperial and Royal School for Art Embroidery of the Ministry of Commerce in Vienna. She invented a new type of lacework, points imperial, and a new technique of embroidery, broderie dentelle, which was collected by Empress Elisabeth of Austria. She was awarded an Imperial and Royal Warrant of Appointment.