Thézan is the name of two French communes: 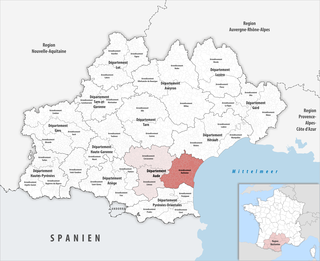 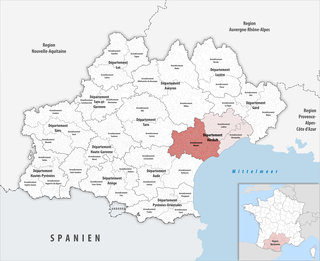 The United States Department of Defense is an executive branch department of the federal government charged with coordinating and supervising all agencies and functions of the government directly related to national security and the United States Armed Forces. The DoD is the largest employer in the world, with nearly 1.3 million active-duty service members as of 2016. More employees include over 826,000 National Guard and Reservists from the armed forces, and over 732,000 civilians bringing the total to over 2.8 million employees. Headquartered at the Pentagon in Arlington, Virginia, just outside Washington, D.C., the DoD's stated mission is to provide "the military forces needed to deter war and ensure our nation's security".

There are numerous castles in the Hérault départment of France. Most are little more than ruins and many are barely discernible. Castles or their remains may be found at the following locations among others:

Corbières is an Appellation d'origine contrôlée (AOC) for wine in the Languedoc-Roussillon, France, and it is this region's largest AOC, responsible for 46 per cent of the region's AOC wine production in 2005. Red wine dominates the production in Corbières with almost 95 per cent, with 3.5 per cent rosé wine and 2 per cent white wine making up the balance. Carignan is the most common grape variety. The AOC was created in 1985, covers 13,500 hectares of vineyards and produces an average of 554,000 hectoliters of wine per year, corresponding to 74 million bottles.

Thézan-des-Corbières is a commune in the Aude department in southern France.

Thézan-lès-Béziers is a commune in the Hérault department in the Occitanie region in southern France.

Paul Philémon Rastoul was a French physician best known for his role in the Paris Commune of 1871. Rastoul studied medicine in Montpellier from 1855 to 1862 and moved to Paris in 1863 where he began practicing. During the Paris Commune, Rastoul was elected to represent the 10th arrondissement at the Communal Council. He was put in charge of medical services in Paris. After the Commune, Rastoul was arrested and imprisoned in France before being deported to New Caledonia in 1873 where he was allowed to practice medicine and partially recover his liberty. Following the 1874 escape of a group including Henri Rochefort, Rastoul was sent to the Isle of Pines. In March 1875, Rastoul and nineteen others attempted to escape from the island on a raft but drowned.

Alice Garoute was a Haitian suffragist and advocate for women's rights in Haiti, including those of rural women. On her deathbed in 1950, Alice Garoute asked that flowers be placed on her grave the day Haitian women would finally be able to vote. She may have attended the first meeting of the Inter-American Commission of Women (IACW) in Havana in February 1930. The IACW was in charge of investigating the legal status of women in Latin-America and is credited for being the first governmental organization in the world to be founded for the express purpose of advocating women's issues.

The canton of Les Corbières is an administrative division of the Aude department, southern France. It was created at the French canton reorganisation which came into effect in March 2015. Its seat is in Fabrezan.

The canton of Cazouls-lès-Béziers is an administrative division of the Hérault department, southern France. It was created at the French canton reorganisation which came into effect in March 2015. Its seat is in Cazouls-lès-Béziers.