Théziers is a commune in the Gard department in the Occitanie region in southern France.

Théziers was founded in the 6th century BC by Greek colonists, who, after they had founded the coastal town of Marseille (Greek: Μασσαλία), advanced inland to found smaller colonies in the periphery. The ancient name of the town was Tedusia (Greek: Θεδουσία), under which the town was known during the Roman times. It was a fortified settlement situated on a hill, which was captured by the Celts during their invasions in the 2nd century BC. Gradually the Romans occupied the Gaul and expelled the Celts, while the settlement evolved as a Gallo-Roman village.

The Celts are a collection of Indo-European peoples in parts of Europe and Anatolia identified by their use of the Celtic languages and other cultural similarities. The history of pre-Celtic Europe and the exact relationship between ethnic, linguistic and cultural factors in the Celtic world remains uncertain and controversial. The exact geographic spread of the ancient Celts is disputed; in particular, the ways in which the Iron Age inhabitants of Great Britain and Ireland should be regarded as Celts have become a subject of controversy. According to one theory, the common root of the Celtic languages, the Proto-Celtic language, arose in the Late Bronze Age Urnfield culture of Central Europe, which flourished from around 1200 BC.

Galatia was an ancient area in the highlands of central Anatolia, roughly corresponding to the provinces of Ankara and Eskişehir, in modern Turkey. Galatia was named after the Gauls from Thrace, who settled here and became its ruling caste in the 3rd century BC, following the Gallic invasion of the Balkans in 279 BC. It has been called the "Gallia" of the East, Roman writers calling its inhabitants Galli.

Gard is a department in Southern France, located in the Occitanie region. It had a population of 742,006 as of 2016; its prefecture is Nîmes. The department is named after the Gardon River; the Occitan name of the river, Gard, has been replacing the French name in recent decades, both administratively and among French speakers. 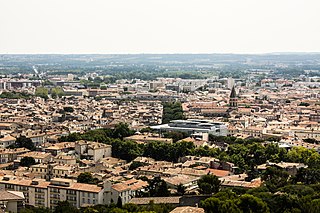 Nîmes is the prefecture of the Gard department in the Occitanie region of Southern France. Located between the Mediterranean Sea and Cévennes, the commune of Nîmes has an estimated population of 151,001 (2016). 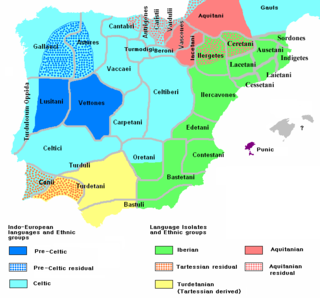 The Celtiberians were a group of Celts and Celticized peoples inhabiting the central-eastern Iberian Peninsula during the final centuries BC. They were explicitly mentioned as being Celts by several classic authors. These tribes spoke the Celtiberian language and wrote it by adapting the Iberian alphabet. The numerous inscriptions that have been discovered, some of them extensive, have allowed scholars to classify the Celtiberian language as a Celtic language, one of the Hispano-Celtic languages that were spoken in pre-Roman and early Roman Iberia. Archaeologically, many elements link Celtiberians with Celts in Central Europe, but also show large differences with both the Hallstatt culture and La Tène culture.

Uzès is a small town and a commune in the Gard department in southern France.

The area known as Croatia today has been inhabited throughout the prehistoric period, ever since the Stone Age, up to the Migrations Period and the arrival of the Croats.

Le Vigan is a commune in the Gard department in southern France. It is a sub-prefecture of the department.

Le Vigan is supposed to occupy the site of the old Gallo-Roman town of Vindomagus. The name implies that a Celtic population was settled there. "Magh" signifies meadow or plain, and "vindo" is the Latin form given to the word we find in so many places to signify open country, wind-swept, surt-scorched, rambled over by sheep,... No descriptive appellation could better suit Le Vigan.

Histria or Istros, was a Greek colony or polis near the mouths of the Danube, on the western coast of the Black Sea. Histria is derived from the Latin word "Hister", meaning "Danube", the river the city was located near, and "-ia", a suffix added to a word to signify that it was a location or place, as in Gallia or Iberia. Altogether Histria means "On the Danube", "Located near - The Danube". It was the first urban settlement on Romanian territory when founded by Milesian settlers in the 7th century BC. It was under Roman rule from the 1st to 3rd centuries AD. Invasions during the 7th century AD rendered it indefensible, and the city was abandoned. In antiquity, it also bore the names Istropolis, Istriopolis, and Histriopolis. 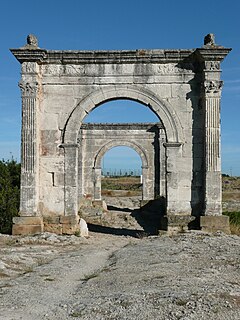 Saint-Chamas is a commune in the department of Bouches-du-Rhône in the Provence-Alpes-Côte d'Azur region in southern France.

Garrigues-Sainte-Eulalie is a commune in the Gard department in southern France. It lies 54 km (34 mi) from Montpellier.

Le Cailar is a commune in the Gard department in southern France. It is located at the confluence of the River Vistre and the River Rhôny. It was an important port during the Iron Age at a time when lagoons connected to the Mediterranean Sea covered the adjoining low-lying land.

From their new bases in northern Illyria and Pannonia, the Gallic invasions climaxed in the early 3rd century BC, with the invasion of Greece. The 279 BC invasion of Greece proper was preceded by a series of other military campaigns waged in the southern Balkans and against the kingdom of Macedonia, favoured by the state of confusion ensuing from the disputed succession after Alexander the Great's death. A part of the invasion crossed over to Anatolia and eventually settled in the area that came to be named after them, Galatia. 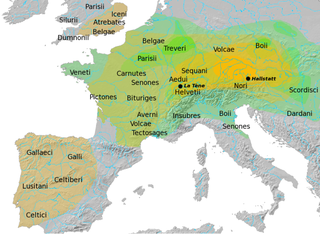 The appearance of Celts in Transylvania can be traced to the later La Tène period . Excavation of the great La Tène necropolis at Apahida, Cluj County, by S. Kovacs at the turn of the 20th century revealed the first evidence of Celtic culture in Romania. The 3rd–2nd century BC site is remarkable for its cremation burials and chiefly wheel-made funeral vessels.