The 5th Special Forces Group Detachment A-109 [1] first established a base here in March 1966 to monitor communist infiltration into the Da Nang vital area. The base was located near Route 14 approximately 40 km southwest of Da Nang. [2]

In July 1974 Thường Ðức was attacked again by a Regiment of the PAVN 324th Division starting the Battle of Thượng Đức (1974). At the conclusion of the battle in November 1974 the PAVN occupied Thường Ðức. [5]

The base is now partly a cemetery while the remainder has returned to jungle.

The Battle of Lang Vei began on the evening of 6 February and concluded during the early hours of 7 February 1968, in Quảng Trị Province, South Vietnam. Towards the end of 1967 the 198th Tank Battalion, People's Army of Vietnam (PAVN) 202nd Armored Regiment, received instructions from the North Vietnamese Ministry of Defense to reinforce the 304th Division as part of the Route 9-Khe Sanh Campaign. After an arduous journey down the Ho Chi Minh trail in January 1968, the 198th Tank Battalion linked up with the 304th Division for a major offensive along Highway 9, which stretched from the Laotian border through to Quảng Trị Province. On 23 January, the 24th Regiment attacked the small Laotian outpost at Bane Houei Sane, under the control of the Royal Laos Army BV-33 'Elephant' Battalion.

The Battle of Kham Duc was a major battle of the Vietnam War. The event occurred in Khâm Đức, now district capital of Khâm Đức District, then in Quảng Tín Province, from 10–12 May 1968. During the Tet Offensive of 1968, the People's Army of Vietnam (PAVN) 2nd Division tried to capture Đà Nẵng, but they were defeated in the Battle of Lo Giang by elements of the U.S. 1st Marine Division and the 23rd Infantry Division (Americal). PAVN General Chu Huy Mân disengaged from the fight on the outskirts of the city, and pulled the 2nd Division into the mountains where it could rest, rebuild, and prepare for the next major operation. Khâm Đức, a small district in the north of Quảng Tín, was chosen as the next target for the 2nd Division. Following their defeat at Đà Nẵng, U.S. military intelligence agencies in I Corps Tactical Zone were confused by the movements of the 2nd Division, because they could not track down the unit. 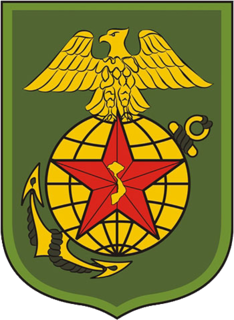 The Republic of Vietnam Marine Division was part of the armed forces of South Vietnam. It was established by Ngo Dinh Diem in 1954 when he was Prime Minister of the State of Vietnam, which became the Republic of Vietnam in 1955. The longest-serving commander was Lieutenant General Le Nguyen Khang. In 1969, the VNMC had a strength of 9,300, 15,000 by 1973., and 20,000 by 1975.

The Vietnamese Rangers, properly known in Vietnamese as the Biệt Động Quân and commonly known as the ARVN Rangers, were the light infantry of the Army of the Republic of Vietnam. Trained and assisted by American Special Forces and Ranger advisers, the Vietnamese Rangers infiltrated beyond enemy lines in daring search and destroy missions. Initially trained as a counter-insurgency light infantry force by removing the fourth company each of the existing infantry battalions, they later expanded into a swing force capable of conventional as well as counter-insurgency operations, and were relied on to retake captured regions. Later during Vietnamization the Civilian Irregular Defense Group program was transferred from MACV and integrated as Border Battalions responsible for manning remote outposts in the Central Highlands.

PHASE II of the Tet Offensive of 1968 was launched by the People's Army of Vietnam (PAVN) and Viet Cong (VC) against targets throughout South Vietnam, including Saigon from 29 April to 30 May 1968. The May Offensive was considered much bloodier than the initial phase of the Tet Offensive. US casualties across South Vietnam were 2,169 killed for the entire month of May making it the deadliest month of the entire Vietnam War for U.S. forces, while South Vietnamese losses were 2,054 killed. PAVN/VC losses exceeded 24,000 killed and over 2,000 captured. The May Offensive was a costly defeat for the PAVN/VC.

The 2nd Division was a division of the Army of the Republic of Vietnam (ARVN)—the army of the nation state of South Vietnam that existed from 1955 to 1975. It was part of I Corps that oversaw the northernmost region of South Vietnam.

The Hue–Da Nang Campaign was a series of military actions conducted by the People's Army of Vietnam (PAVN) against the Army of the Republic of Vietnam (ARVN) during the Vietnam War, also known in Vietnam as the American War. The campaign was centred on the cities of Huế and Da Nang, with secondary fronts in the provinces of Quảng Trị and Quảng Ngãi. The campaign began on March 5 and concluded on April 2, 1975.

Operation Oklahoma Hills was a clear and search operation during the Vietnam War mounted by the 1st Marine Division and the Army of the Republic of Vietnam (ARVN) 51st Regiment from 31 March to 29 May 1969.

The Battle of Thượng Ðức was a decisive battle of the Vietnam War which began on 29 July and concluded on 11 November 1974.

Operation Mameluke Thrust was a US Marine Corps operation that took place in Happy Valley southwest of Danang, lasting from 19 May to 23 October 1968.

Operation Maui Peak was a US Marine Corps operation that took place near the Thường Ðức Camp southwest of Danang, lasting from 1 to 19 October 1968.

Hill 327 is a former U.S. Marine Corps (USMC), U.S. Army and Army of the Republic of Vietnam (ARVN) base southwest of Da Nang in central Vietnam. The base was established on a ridgeline 4 km west of Da Nang Air Base.

The Battle of Landing Zone Center took place from 5–25 May 1968 in Quảng Tín Province during the Vietnam War.

The 2nd Infantry Division is a division of the People's Army of Vietnam (PAVN), first formed from Viet Cong (VC) and PAVN units in September 1965.

The Battle of Thượng Ðức was a battle of the Vietnam War where North Vietnamese forces attempted to overrun the Civilian Irregular Defense Group (CIDG) Thường Ðức Camp between 28 and 30 September 1968.