Last updated October 31, 2022
Vietnamese weightlifter
In this Vietnamese name, the surname is Thạch, but is often simplified to Thach in English-language text. In accordance with Vietnamese custom, this person should be referred to by the given name, Tuấn (simply) or Kim Tuấn (politely).

Thạch Kim Tuấn (born 15 January 1994) is a Vietnamese weightlifter of Khmer descent. He won a silver and two bronze medals at the 2011 World Junior Weightlifting Championships in Malaysia. [1] Dubbed the "young hope" by the Vietnam Athletes Association for Weightlifting at the 2012 Summer Olympics – Men's 56 kg but did not qualify. [2] However, he did manage to win a silver medal at the following year's Asian Championships.

Ivan Ivanov Ivanov is a Bulgarian former weightlifter and current head coach of the national Bulgarian weightlifting teams. He claimed one gold medal at the 1992 Olympic Games, four time World Champion, and five time European Champion. He won the 1990 World Cup. Ivan also won 1991 World Cup Final in Barcelona and 1990 World Cup Final in Tainan, and in 1989 in Lisbon he finished second. In 1990 he became gold medalist of the Goodwill Games in Seattle. Ivanov was named the Best Weightlifter in the World by the International Weightlifting Federation for 1989 and 1990. Ivanov is also a three-time World Junior Champion and twice European Junior Champion. He was elected as the best coach of Bulgaria for 2019 by the Ministry of Youth and Sports of the country together with the trainer on rhythmic gymnastics Vesela Dimitrova.

Mel Daluzyan, is a transgender Armenian weightlifter. He received the Honoured Master of Sports of Armenia title in 2006. 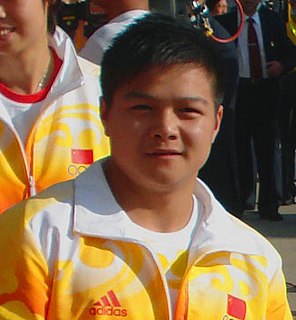 Long Qingquan is a Chinese weightlifter. He is a two-time Olympic champion in the 56 kg weight division.

Hidilyn Francisco Diaz is a Filipino weightlifter and airwoman, the first Filipino to ever win an Olympic gold medal for the Philippines. She is also an Olympic weightlifting record holder by winning the women's 55 kg category for weightlifting at the 2020 Summer Olympics. 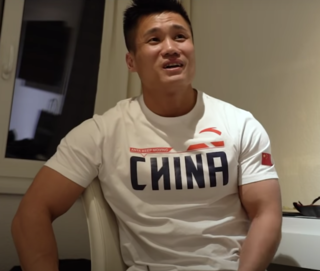 Lü Xiaojun is a Chinese weightlifter. He is a three time Olympic champion and five time world champion competing in the 77 kg category until 2018 and 81 kg starting in 2018 after the International Weightlifting Federation reorganized the categories. 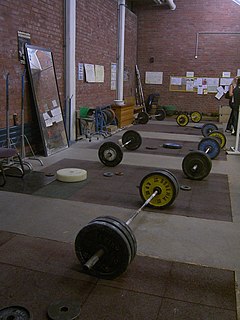 Karnam Malleswari won a bronze medal in the 2000 Summer Olympics at Sydney, which made her the first Indian woman to win an Olympic medal. In 1992, she participated in the Asian championship which took place in Thailand and stood second and won three silver medals. She also won three Bronze medals in the world championship.

Trần Lê Quốc Toàn is a male Vietnamese weightlifter who competed at the 2012 Summer Olympics in the -56 kg class. He initially finished 4th, however was awarded the bronze medal in 2019, after the originally 3rd Valentin Hristov of Azerbaijan was disqualified for doping.

Om Yun-chol or Um Yoon-chul is a North Korean weightlifter, Olympic Champion, and five time World Champion competing in the 56 kg category until 2018 and 55 kg starting in 2018 after the International Weightlifting Federation reorganized the categories. He is 152 centimetres and weighs 55 kilograms (121 lb). Om represents the Amnokgang Sports Team.

Nguyễn Thị Thiết is a Vietnamese weightlifter. She won a total of four medals for the 63 kg class at the Southeast Asian Games.

Rebeka Salsabil Ibrahim is a retired Latvian weightlifter, two time Junior World Champion and two time European Champion competing in the 58 kg division until 2018 and 59 kg starting in 2018 after the International Weightlifting Federation reorganized the categories.

Alexandra Aborneva is a Kazakhstani weightlifter, competing in the +75 kg category and representing Kazakhstan at international competitions. She competed at world championships, including at the 2015 World Weightlifting Championships. In 2013 Aborneva had a total of 3 gold medals revoked after she tested positive for banned performance-enhancing drugs.

Fares Ibrahim Saed Hassouna El-Bakh, commonly known as Meso Hassouna, is a Qatari weightlifter, Olympic Champion and two time Junior World Champion competing in the 85 kg, and 94 kg categories until 2018 and 96 kg starting in 2018 after the International Weightlifting Federation reorganized the categories.

Nguyễn Trần Anh Tuấn is a Vietnamese weightlifter. He represented Vietnam at the 2019 World Weightlifting Championships, as well as the 2015 and 2016 Asian Championships.