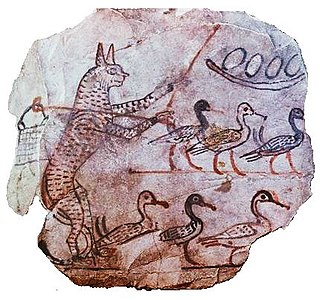 Fable is a literary genre: a succinct fictional story, in prose or verse, that features animals, legendary creatures, plants, inanimate objects, or forces of nature that are anthropomorphized and that illustrates or leads to a particular moral lesson, which may at the end be added explicitly as a pithy maxim or saying.

The Thằng Bờm stories, along with poems like the satirical Truyện Trê Cóc , were among the folktales reanalysed by socialist scholars. [2]

Truyện Trê Cóc is a 398-line satirical poem written in Vietnam in the 13th Century.

VTV3 is a Vietnamese television station operated and owned by government-owned VTV Network. It launched on 31 March 1996 and has broadcast for 24 hours daily since 2006 as the country's first sports and entertainment channel, as well as American and Asian series.

Hoàng Cầm was pen name of Bùi Tằng Việt, a Vietnamese poet, playwright, and novelist. He is best remembered for his poems such as Bên kia sông Đuống, Lá diêu bông or the plays Kiều Loan and Hận Nam Quan. Being involved in the Nhân Văn affair, Hoàng Cầm retreated from the Vietnam Association of Writers in 1958, later in 2007 he was awarded the National Prize for Literature and Art by the Government of Vietnam. 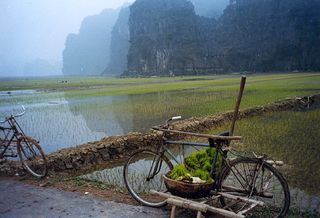 Hoa Lư is a district of Ninh Bình Province in the Red River Delta region of Vietnam. Before 1010, Hoa Lư served as the capital of Dai Co Viet. Hoa Lư Ancient Capital is located in Trường Yên Commune of this district (vi). It comprises 10 communes and one township: Trường Yên, Ninh Hòa, Ninh Giang, Ninh Mỹ, Ninh Khang, Ninh Xuân, Ninh Vân, Ninh Hải, Ninh An, Ninh Thắng, and Thiên Tôn Township. As of 2003 the district had a population of 66,932. The district covers an area of 103 km². The district capital lies at Thiên Tôn.

Girolamo Maiorica was a 17th-century Italian Jesuit missionary to Vietnam. He is known for compiling numerous Roman Catholic works written in the Vietnamese language's demotic chữ Nôm script, both on his own and with assistance from local converts. Maiorica was one of the first authors of original Nôm prose. His works are seen as a milestone in the history of Vietnamese literature.

Ninh Viết Giao is a Vietnamese writer. He graduated from Hanoi University in 1956. He was one of the writers reviving an interest in folk tales such as Thằng Bờm and Truyện Trê Cóc.

Doraemon is an anime and manga written and illustrated by Fujiko F. Fujio, it was first published in December 1969 in Japan. The Doraemon franchise first appeared in Vietnam in 1992 when the Doraemon manga was published for the first time.

Nguyễn Thanh Tùng, known professionally as Sơn Tùng M-TP, is a Vietnamese singer-songwriter and actor. Born and raised in Thái Bình, Thái Bình Province, Tùng's family discovered his singing ability when he was two years old. His 2012 and 2013 singles, "Cơn mưa ngang qua" and "Em của ngày hôm qua", launched his career even though he admitted, after being charged with plagiarism, to having taken and being "inspired" by other music. His later successful singles, "Chắc ai đó sẽ về" and "Chúng ta không thuộc về nhau", were also suspected of plagiarism. In 2017, he had a more-favorable public reception for "Lạc trôi" and "Nơi này có anh". That year, Tùng also released the compilation album m-tp M-TP and published his autobiography, Chạm tới giấc mơ.

Hồ Bích Ngọc is a Vietnamese singer-songwriter and celebrity. She rose to fame in 2003 after winning the Television Voice Contest Tiếng hát Truyền hình HTV.

Phạm Cao Cường is a badminton player from Vietnam. He was born in badminton family, his brothers Cao Hiếu and Cao Thắng are former national players. He had shown his potential as a badminton player when he was young, and at age 16, he reach in the top 8 at the National Championships in the men's singles event. His parents and Ho Chi Minh City Sports Department decided to sent him to trained in Indonesia under coach Asep Suharno. In the junior event, he was the runner-up at the U-19 Korea Junior Open in 2013. Phạm competed at the 2014 Summer Youth Olympics and Asian Games. He emerged as the champion at the 2018 Iran Fajr International by defeated his senior teammates Nguyễn Tiến Minh in the final.

Nguyễn Hữu Chỉnh was an official during the Revival Lê dynasty in Vietnam.

Phan Văn Lân was a general of Tây Sơn dynasty. 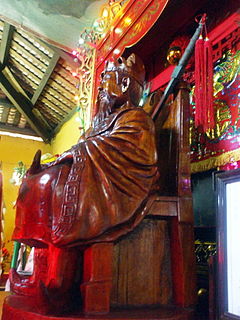