The publishing house was established in 1957 "to introduce readers around the world to Vietnam" through publications in English, French and other foreign languages. [1] From 1957 to 1992 it was known as the Foreign Languages Publishing House and also as the Editions en Langues Etrangères (Nhà xuất bản ngoại văn). [2]

Thế Giới also offers consultancy services using its experience in translation and publishing for cooperative ventures in the book industry, printing and translation.

Under The Gioi imprint

The Sán Dìu are a Yao ethnic group in northern Vietnam who speak Yue Chinese (Cantonese), a Chinese language. Although the Vietnamese government classifies San Diu as an independent group, the San Diu people are originally a part of Chinese people in Vietnam. They are believed to have migrated from Guangdong, China around 1600.

During ancient times, the ancestors of the Vietnamese were considered to have been Proto-Austroasiatic speaking people, possibly traced to the ancient Dong Son culture. Modern linguists however, describe modern Vietnamese having lost many Proto-Austroasiatic phonological and morphological features that original Vietnamese had, such as the linguistic separation of the Muong and Vietnamese languages 1000 years ago. Before the introduction of the Chinese-style writing system, the Vietnamese language had a spoken language but no academic, formal, scholarly written text until 111 BC. Up until the beginning of the 20th century, Vietnamese literature, governmental, scholarly, and religious documents, steles, and temple signs were written in classical Chinese script, using Chữ Hán and chữ Nôm. This had been done since at least 111 BC up to at least the 19th Century in Vietnam, which suggests nearly 2000 years of Han-Nom scripture.

The Thổ ethnic group inhabits the mountainous regions of northern Vietnam, mainly Nghệ An Province southwest of Hanoi. Many Thổ speak the Tho language, which is closely related to Vietnamese. The Thổ population numbered 91,430 in 2019.

Foreign Languages Press is a publishing house located in China. 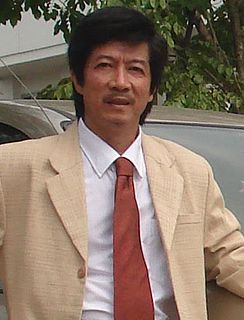 Kim Đồng Publishing House is the largest book producer and publisher for Vietnamese children. With more than a thousand titles of books published yearly, its books are offered to children of all ages, providing a wide range of collections and genres from literature, science, art, history to comics, pop-up and board books. The publisher was named after the Indochina War young communist martyr Kim Đồng. 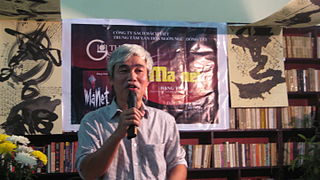 The Katu people are an ethnic group of about 102,551 who live in eastern Laos and central Vietnam. Numbered among the Katuic peoples, they speak a Mon-Khmer language.

Rade, is an Austronesian language of southern Vietnam. There may be some speakers in Cambodia. It is a member of the Chamic subgroup, and is closely related to the Cham language of central Vietnam.

There is a large community of Vietnamese people in Laos. As Vietnam and Laos are neighbours, there is a long history of population migrations between the territories which today make up the two respective countries. 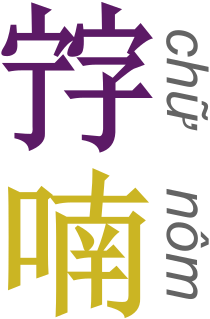 Chữ Nôm is a traditional logographic writing system used to write the Vietnamese language. It uses classical Chinese characters to represent Sino-Vietnamese vocabulary and some native Vietnamese words, while new characters were created on the Chinese model to represent some other words.

The Foreign Languages Publishing House was a state-run publisher in the Soviet Union that published Russian literature, novels, propaganda, and books about the USSR in foreign languages. These included works by Lenin and Stalin. It was headquartered in Moscow at 21 Zubovsky Boulevard. It was founded in 1946, and in 1964 it was split into separate publishers Progress and Mir.

Nguyen Quoc Y, also known as Master Y is a famous chef, vice president of the Vietnam Chef Association, the head of culinary training of the tourism training association of Viet Nam. Graduate United Business Institutes (Belgium), he is the leader, researcher and expert training cuisine in Vietnam. He is also the founder of Netspace Culinary Arts School.