The Thị Vải River (Vietnamese : Sông Thị Vải) is a river of Vietnam. It flows for 76 kilometres through Bà Rịa–Vũng Tàu Province and Đồng Nai Province. [1]

Đồng Nai is a province in the Southeast region of Vietnam, located east and northeast of Ho Chi Minh City (Saigon). The largest city in Đồng Nai is Biên Hòa. Prior to Vietnamese colonization, the area was dominated by the Funan, Chenla, Khmer empire and subsequent influences until 1627. The area was known as Kâmpéâp Srâkatrey in Khmer.

The Red River, also known as the Hồng Hà and Sông Cái (lit. "Mother River") in Vietnamese and the Yuan River in Chinese, is a river that flows from Yunnan in Southwest China through northern Vietnam to the Gulf of Tonkin. According to C. Michael Hogan, the associated Red River Fault was instrumental in forming the entire South China Sea at least as early as 37 million years before present. 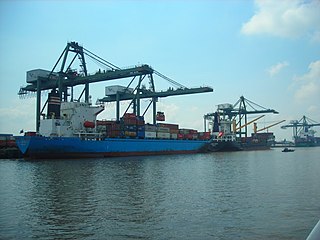 Saigon Port is a network of ports in Ho Chi Minh City. The port name is derived from the former name of the city. By 2013, it has become the 24th busiest container port in the world.

Châu Thành is a district (huyện) of An Giang Province in the Mekong Delta region of Vietnam.

Ân Thi is a rural district of Hưng Yên Province in the Red River Delta region of Vietnam. As of 2003 the district had a population of 135,423. The district covers an area of 128 km². The district capital lies at Ân Thi.

Cát Tiên is a district (huyện) of Lâm Đồng Province in the Central Highlands region of Vietnam.

The Hàn River is a river located in the South Central Coast region of Vietnam. It originates in Quảng Nam Province and empties into the South China Sea at Da Nang. 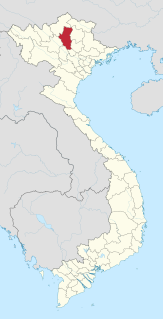 Tuyên Quang is a province of Vietnam, located in the northeastern part of the country to the northwest of Hanoi, at the centre of Lô River valley, a tributary of the Red River. The delta formation in the province is called the Tonkin Delta. Its capital is Tuyên Quang township. The province had a population of 730,800 in 2011, with a density of 125 persons per km2 over a total land area of 5,867.3 square kilometres (2,265.4 sq mi).

The Nanxi River, also known as the Nậm Thi River in Vietnamese or Namiti, is a tributary of the Red River located in China's Yunnan province. It is a border river of Lào Cai, Vietnam, and Hekou, China.

Bồng Sơn is a town in the South Central Coast region of Vietnam. It is the administrative centre of Hoài Nhơn District in the north of Bình Định Province. It is 84km north of the provincial capital Quy Nhơn and 20km south of Quảng Ngãi Province.