Thống Nhất is a rural district of Đồng Nai Province in the Southeast region of Vietnam. As of 2003, the district had a population of 146,112. [1] The district covers an area of 247 km². The district capital lies at Dầu Giây. [1] 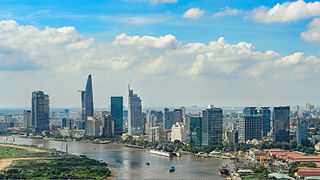 Ho Chi Minh City, also commonly referred to as Saigon, is the largest city in Vietnam. According to the 2019 census, Ho Chi Minh City has a population of over 8.9 million within city proper and over 21 million within the metropolitan area. Located in southeastern Vietnam, the city surrounds the Saigon River and covers about 2,061 square kilometres. Ho Chi Minh City is the economic and financial centre of Vietnam, and plays an important role in the country's culture and scientific developments.

Bình Dương is a province of Vietnam. It is located in the Southeast region of the country and the Southern Key Economic Zone 2, bordering Bình Phước Province to the north, Ho Chi Minh City (HCMC) to the south and southwest, Tây Ninh Province to the west, and Đồng Nai Province to the east. The province was created from Sông Bé Province on 1 January 1997.

Thống Nhất Stadium is a multi-purpose stadium in Ho Chi Minh City, Vietnam. It is located at 138 Đào Duy Từ Street, Ward 6, District 10. It is currently used mostly for football matches and is the home stadium for both Sài Gòn F.C. of V.League 1 and Thành phố Hồ Chí Minh of the V.League 1. The stadium has a capacity to seat 16,000 people.

Long Thanh International Airport is an international airport currently under construction in Long Thanh, Dong Nai, Vietnam. Located approximately 40 km (25 mi) east of Ho Chi Minh City, it has been approved to start construction by the Vietnamese government on April 1, 2021. However, the Vietnamese government has decided to begin 2 years earlier in 2019 and it will be finished by 2025. It will serve over 100 million passengers annually when built to the maximum designed capacity.

The Ho Chi Minh City–Long Thanh–Dau Giay Expressway is a 55-kilometre-long (34 mi) highway in Vietnam. This expressway opened in February 2015, connects Ho Chi Minh City with Thong Nhat, Dong Nai. The estimated investment capital is around 18,000 billion VND. The expressway starts at An Phu Intersection, District 2, Ho Chi Minh City and ends at Dau Giay Interchange, Thong Nhat, Dong Nai. At Dau Giay, it ends at a partially completed cloverleaf interchange with the north-south highway. From here, the planned Dau Giay-Dalat Expressway will start. The North-South Expressway is planned to branch of eastbound in the direction of Phan Thiet.

Nguyễn Trung Trực was a Vietnamese fisherman who organized and led village militia forces which fought against French colonial forces in the Mekong Delta in southern Vietnam in the 1860s. He was active in Tân An and Rạch Giá from the initial French invasion until he was captured and executed.

Tân Hồng is a rural district (huyện) of Đồng Tháp Province in the Mekong Delta region of Vietnam. As of 2003, the district had a population of 79,321. The district covers an area of 291.5 km². The district capital lies at Sa Rài.

Hoành Bồ is a former district of Quảng Ninh Province in the northeastern region of Vietnam. In 2003 the district had a population of 39,650. The district covers an area of 824 km². The district capital lies at Trới. 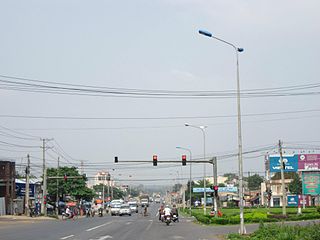 The 2012 V-League season is the 29th season of Vietnam's professional football league and started on 31 December 2011 and finished on 19 August 2012. On 15 December it was announced that the league would change name and would simply be known as the Premier League. Then, it was changed name to Super League.

Bùi Thị Ngà is a member of the Vietnam women's national volleyball team.