The Thổ ethnic group (also Keo, Mon, Cuoi, Ho, Tay Poong) inhabits the mountainous regions of northern Vietnam, mainly Nghệ An Province southwest of Hanoi. Many Thổ speak the Tho language, which is closely related to Vietnamese. The Thổ population numbered 91,430 in 2019. [1]

The Thổ are one of the 4 main groups of Vietic speakers in Vietnam, the others being the Kinh, Muong, and Chứt. The name Thổ, which means "autochthonous" was originally applied to the Tày ethnic group, however this usage is obsolete.

The Thổ people are a heterogeneous mix of different Vietic peoples. Around the end of the 17th century, Vietnam experienced multiple social upheavals that caused multiple migrations of Viet and Muong peoples into territory of other Vietic speaking ethnic minorities such as the Cuối and intermixed with the local populations. After a period of evolution, were given the name Thổ. Their culture combines elements of Viet and Muong culture, with elements of Thái culture. [2] Their clothing is a mix of Vietnamese, Muong, and Tai traditions from the early modern period. Some women wear clothing similar to the Áo bà ba or the Áo tứ thân, but with a Sarong and a Kerchief. Men wear simple tunics and pants. Just like with the Muong, many clothing items are purchased from the Thái. They mainly grow rice and ramie, and use hemp to make bags, hammocks and nets. In the northern communes of Nghệ An, the stilt houses are identical to that of the Muong. In the South, however, they are in the Thái style.

Vietnamese is an Austroasiatic language that originated in Vietnam, where it is the national and official language. Spoken natively by an estimated 95 million people, it is the native language of the Vietnamese (Kinh) people, as well as a first or second language for the many ethnic minorities of Vietnam. As a result of Vietnamese emigration and worldwide cultural influence, Vietnamese speakers are found throughout the world, notably in Southeast Asia, East Asia, North America, Australia and Europe. Vietnamese has also been officially recognized as a minority language in the Czech Republic.

The Sán Dìu are a Yao ethnic group in northern Vietnam who speak Yue Chinese (Cantonese), a Chinese language. Although the Vietnamese government classifies San Diu as an independent group, the San Diu people are originally a part of Chinese people in Vietnam. They are believed to have migrated from Guangdong, China around 1600.

The Bouyei language is a language spoken by the Bouyei ethnic group of Southern Guizhou Province, China. Classified as a member of the Northern Tai group in the Tai language branch of the Tai–Kadai language family, the language has over 2.5 million native speakers and is also used by the Giay people in some parts of Vietnam. There are native speakers living in France or the United States as well, which emigrated from China or Vietnam. About 98% of the native speakers are in China.

The Vietic languages are a branch of the Austroasiatic language family. The branch was once referred to by the terms Việt–Mường, Annamese–Muong, and Vietnamuong; the term Vietic was proposed by Hayes (1982), who proposed to redefine Việt–Mường as referring to a sub-branch of Vietic containing only Vietnamese and Mường.

The Mnong language (Bunong:ឞូន៝ង) belongs to the Austro-asiatic language family. It is spoken by the different groups of Mnong in Vietnam and a Pnong group in Cambodia.

Laghuu is a Loloish language spoken in northwestern Vietnam. In Nậm Sài, Sa Pa Town, the speakers' autonym is, while in Sơn La Province it is. The people are also called the Phù Lá Lão by the Vietnamese.

Bruu is a Mon–Khmer dialect continuum spoken by the Bru people of mainland Southeast Asia.

Chứt or Rục-Sách is a dialect cluster spoken by the Chứt people of Vietnam, with a smaller population of some 450 speakers in neighbouring Khammouane Province, Laos. It is a Vietic language that may be most closely related to Arem.

Cuói, known as Thổ in Vietnam and as Hung in Laos, is a dialect cluster spoken by around 70,000 Thổ people in Vietnam and a couple thousand in Laos, mainly in the provinces of Bolikhamsai and Khammouane. 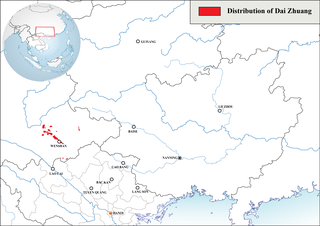 Dai Zhuang is a Tai language spoken in Wenshan Prefecture, Yunnan, China, in Yanshan, Wenshan, Maguan, Malipo, Guangnan counties. It is also spoken in Honghe Prefecture and Vietnam. The largest concentrations are in Wenshan and Yanshan counties.

Mang is an Austroasiatic language of Vietnam, China, and Laos. It is spoken mainly in Lai Châu Province, Vietnam and across the border in Jinping County, China. It was only recently discovered in 1974.

Caolan, sometimes Man Cao Lan, is a Tai language of northern Vietnam. It is spoken by the Cao Lan subgroup of the San Chay people; the Sán Chay proper speak a form of Chinese. According to Pittayaporn (2009), it is closest to the Chongzuo and Shangsi Zhuang across the border in China, both of which are lumped under the apparently polyphyletic Yongnan Zhuang by Ethnologue. Together, Caolan, Chongzuo, and Shangsi form a primary branch of the Tai languages.

Pa Di is a Southwestern Tai language of the Chinese–Vietnamese border. There are about 300 Pa Di speakers in Muong Khuong District, Lao Cai Province, Vietnam, who are classified as ethnic Tày by the Vietnamese government. Pa Di tonal splits are similar to those of Standard Thai.

Ná-Meo is a language of northern Vietnam, spoken by the Mieu people. Nguyen (2007) believes Na Meo may be a Hmongic language closest to Qiandong Miao.