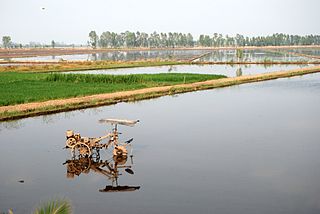 The Mekong Delta, also known as the Western Region or the South-western region is the region in southwestern Vietnam where the Mekong River approaches and empties into the sea through a network of distributaries. The Mekong delta region encompasses a large portion of southwestern Vietnam of over 40,500 square kilometres (15,600 sq mi). The size of the area covered by water depends on the season. Before 1975, Mekong Delta is part of Republic of Vietnam. Mekong Delta is home of the IV Corps region during Vietnam War. IV Corps is the only corps in South Vietnam that VC didn't attack significantly until the last President Duong Van Minh surrendered to North Vietnam.

Thới Lai is a township and capital of Thới Lai District, Cần Thơ, Vietnam. The town covers an area of 9.47 km².

Cờ Đỏ is a rural district of Cần Thơ in the Mekong Delta region of Vietnam. As of 2003 the district had a population of 158,467. The district covers an area of 403 km². The district capital lies at Thới Lai.

Lai Vung is a district of Đồng Tháp Province, the old name is Đức Thành District in Sa Dec Province in the Mekong Delta region of Vietnam. This place was dubbed the Kingdom of Mandarin Oranges

Thanh Sơn is a rural district of Phú Thọ Province in the Northeast region of Vietnam. The Xuân Sơn National Park lies within the district. As of 2003, the district had a population of 187,700. The district covers an area of 1309 km². The district capital lies at Thanh Sơn. 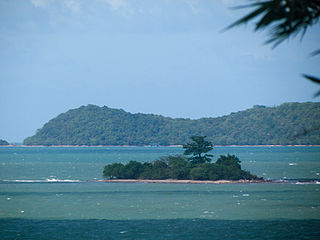 The Six Provinces of Southern Vietnam is the historical name for a particular region of Southern Vietnam which is referred to in French as Basse-Cochinchine.. The region was politically defined and established after the independence of the Nguyễn dynasty, and lasted from 1832, when Emperor Minh Mạng introduced administrative reforms, to 1867, which culminated in the eight-year French campaign to conquer the Six Provinces.