The film start with James (Ratheesh), a wealthy businessman driving back home on Christmas Eve. He notices a pursuing van and speeds to escape, but is blocked by a set of vehicles which finally pushes the car to a lake. His wife Susanna (Urvashi) and a young son, Rony is shocked to hear the news. As Susanna was an orphan, the only assistance that Susanna gets is from family friends Antony (Azeez) and his wife, Mary (K.P.A.C. Lalitha)

During the funeral, James' estranged father Puthenpurackal Kurien Joseph (Jagannatha Varma) and brother David arrives. The family seems to make amends with Susanna, but is more interested in James's wealth. While Antony tries to help Susanna to introduce to the plantation business, Kurien and David wants a power of attorney to run the business for themselves. Following a confrontation, the family files a lawsuit against Susanna, claiming her marriage to James is invalid, hence Susanna and her child are not entitled to James' wealth. Soosanna also is threatened by goons chasing her car.

Receiving no help from anyone, a helpless Susanna by chance encounters George Korah Vettickal (Mammootty), an advocate. He is an old fashioned man dropped out halfway through priesthood studies from Catholic seminary. He is addicted to sniffing tobacco powder. He is an unsuccessful lawyer often running into trouble with dissatisfied clients. He is often guarded by trusted assistant, Appukkuttan Pillai (Kunchan). Susanna hires George to defend her case after James's friend and lawyer Adv. Rajasekharan (Janardanan) refuses to represent her citing his relationship with Kurien. George, as advised by Pillai decides to take financial advantage of Susanna asking for 2% of total assets for representing her in what appears to be a straightforward case.

However the circumstances become complicated when the church's wedding register is missing entry of James and Susanna's wedding in April 1981. Susanna along with George and Pillai visits Father Gabriel, who ordained the wedding. However elderly priests fails to help them as he is suffering from Dementia. On the way back, they are attacked by four goons who beats up George and Pillai. On visiting him at the hospital, George informs Susanna that he is refuse to undertake the case. But George is beaten by goons twice again and threatened against working on Susanna's case. Following this, a determined George decides to proceed with the case. He moves in on James's bungalow as his office is destroyed.

Kurien further established that Susanna was arrested in February 1981 for prostitution, was admitted to a rescue home and was also a psychiatric patient. Kurien manages to convince the parish vicar of this by producing a Police officer, rescue home warden and psychologist. This further disappoints George as Susanna concealed all this from him. Susanna reveals her past to George. A young Susanna, an orphan trained in accounting attends a job interview in James' company. James traps and rapes Susanna. She is mistakenly arrested for prostitution by the commissioner of Police and is sentenced to 18 days in rescue shelter. She ends up on the street mentally shocked. A repentant James finds her, gets her treated and marries her.

Convinced of the narrative, George resumes his work. They accidentally finds their wedding video tape where George identifies one of the goons who attacked him. He further discovers that the business manager Unnikrishnan is collaborating with somebody else. He also confronts the church clerk who erased the wedding records and recovers the records. He traps and beats up two of the goons who attacked him.

George, not only establishes the wedding in the court but also files a private suit claiming James was murdered. The police, after investigation arrests Kurien and David. He further reveals that Kurien Joseph is James' step father with witnesses from the past. James also believed Kurien murdered his father John Varghese, married his mother and captured all family assets. Manager, Unnikrishnan testifies that James rejected pleas of financial help by Kurien and David. Just before his death, James had an altercation with Kurien and David. James's ex-assistant Peter testifies witnessing Kurien and goons murdering James. The court finds Kurien guilty. The court will be postpone the sentencing to the next day.

Kurien on a last ditch attempt, attacks Susanna and Antony on the way back home. Antony is stabbed to death. George arrives just in time to save Susanna and Rony. Kurien is killed when his car plunges into a mountain ditch during the fight.

The film was commercial success. [2]

Nasrani is a 2007 Indian Malayalam-language political thriller film directed by Joshiy, produced by Rajan Thaliparambu, written by Ranjith and starring Mammootty. The film tells the story of an Achayan from a Syrian Catholic family in Central Travancore. K.P.A.C. Lalitha won the Asianet Film Award for Best Supporting Actress for her role.

Nirakkoottu is a 1985 Indian Malayalam-language film directed by Joshiy, written by Dennis Joseph, starring Mammootty, Sumalatha, Urvashi, Lizy, Babu Namboothiri and Jose Prakash. The music was composed by Shyam. The story follows journalist Sasikala Varghese's (Urvashi) investigation of millionaire Ravi Varma (Mammootty), who is sentenced to death for the murder of his wife Mercy (Sumalatha). 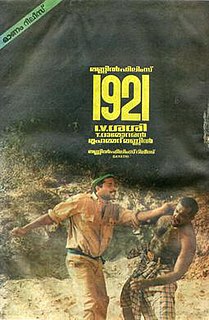 Kauravar is a 1992 Indian Malayalam-language gangster action thriller drama film, directed by Joshiy, written by Lohithadas, starring Mammootty, Vishnuvardhan, Thilakan, Murali, Anju, Babu Antony and Bheeman Raghu. The film was remade in Telugu as Khaidi Garu, with Mohan Babu. It was also remade into Kannada in 2001 by the title Devasura, starring Devraj and B. C. Patil.

Kuttettan is a 1990 Malayalam romantic comedy movie, directed by Joshiy and written by A. K. Lohithadas. The film stars Mammootty, Saritha, Urvashi, Lizy, Maathu, Sukumari, Jagadish, Murali and Jagannatha Varma. The film was a critical success but was an average grosser at the box office.

Kottayam Kunjachan is a 1990 Indian Malayalam-language action-comedy film directed by T. S. Suresh Babu and written by Dennis Joseph, loosely based on a novel by Muttathu Varkey. It stars Mammootty in the title role as Kunjachan, with Ranjini, Innocent, KPAC Lalitha, Sukumaran, Babu Antony, and Prathapachandran appearing in supporting roles. Produced by M. Mani, the plot was set in the Kottayam-Catholic backdrop in Kerala, with characters speaking the native Kottayam dialect. 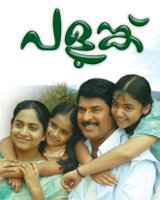 Palunku (transl. Crystal) is a 2006 Malayalam-language drama film written and directed by Blessy. It stars Mammootty in the lead role with Baby Nazriya Nazim making her on-screen debut through this film- along with Lakshmi Sharma, Baby Nivedita, Kottayam Santha and Jagathy Sreekumar playing other pivotal roles. Lakshmi Sharma made her debut as an actress with this film. The film exposes the trappings of consumerism and how city life changes the perspective and priorities of an ordinary farmer, Monichan (Mammootty). 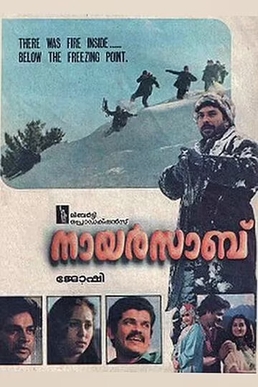 Nair Saab is a 1989 Malayalam language action thriller film, written by Dennis Joseph and directed by Joshiy and produced by Liberty Productions. It stars Mammootty, Suresh Gopi, Mukesh and Geetha. It was released on the occasion of Onam. Nair Saab biggest blockbuster of Mammootty and establishing super stardom and highest grossing malayalam movie history

Pidakkozhi Koovunna Noottandu is a 1994 Indian Malayalam-language comedy-drama film directed by Viji Thampi and written by Sasidharan Arattuvazhi from a story by Urvashi, who also produced the film. Starring Urvashi, Manoj K. Jayan, Jagathy Sreekumar, Kalpana, K. P. A. C. Lalitha, Vinaya Prasad, Janardhanan, Ratheesh and Sai Kumar. The story revolves around paying guests in a female-only homestay who identify themselves as misandrists. 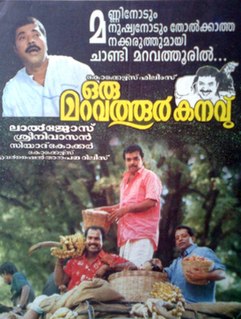 Golanthara Vartha is a 1993 Malayalam film directed by Sathyan Anthikad, written by Sreenivasan and produced by B. Sasikumar. The film stars Mammootty, Shobana, Sreenivasan and Kanaka in the main roles.

Pranamam is a 1986 Indian Malayalam film, directed by Bharathan and produced by Joy Thomas. The film stars Mammootty, Suhasini Mani Ratnam, Nedumudi Venu and Ashokan. The film handles a socially relevant theme and has musical score by Ouseppachan. This movie was remade in Tamil as Puyal Paadum Paattu

Veendum is a 1986 Indian Malayalam film, directed by Joshiy starring Mammootty, Ratheesh, Jayashree and Geethu Mohandas in the lead roles. The film has musical score by Ouseppachan.

Kakka Thollayiram is a 1991 Indian Malayalam film, directed by V. R. Gopalakrishnan. The film stars Mukesh, Urvashi, Chithra and Sukumari in the lead roles. The film has musical score by Johnson. Urvashi won the Kerala State Film Award for Best Actress for her performance in the film.

Moonnu Masangalku Mumbu is a 1986 Indian Malayalam film, directed by Cochin Haneefa and produced by Muhammed Mannil. The film stars Mammootty, Urvashi, Nedumudi Venu and Ambika in the lead roles. The film has a musical score by Shyam. It was remade in Tamil as Paasa Paravaigal and in Telugu as Anna Chellelu.