The Amazing Transparent Man is a 1960 American science fiction thriller B-movie starring Marguerite Chapman in her final feature film. The plot follows an insane ex–U.S. Army major who uses an escaped criminal to steal materials to improve the invisibility machine his scientist prisoner made. [2] It was one of two sci-fi films shot back-to-back in Dallas, Texas by director Edgar G. Ulmer (the other was Beyond the Time Barrier , also released that same year). [3] The combined filming schedule for both films was only two weeks. The film was later featured in an episode of Mystery Science Theater 3000 .

Former U.S. Army major Paul Krenner plans to conquer the world with an army of invisible soldiers and will do anything to achieve that goal. With the help of his hired muscle Julian, Krenner forces Dr. Peter Ulof to perfect the invisibility machine that Ulof invented. He imprisons Ulof's daughter Maria to keep Ulof in line.

The nuclear materials that Ulof needs to improve his invisibility machine are extremely rare and kept under guard in government facilities. Krenner arranges the prison break of notorious safecracker Joey Faust to steal the materials that he needs. Faust will do the jobs while invisible. Krenner offers Faust money for the jobs and Faust expresses his grievances against working for him. Faust tells him that he will snitch if he is returned to prison, but Krenner informs Faust that he is wanted dead or alive, so Faust reluctantly complies. However, when he meets Krenner's woman, Laura Matson, he slowly charms her into a double cross.

Faust continues attempting to escape and tries to get one over on Krenner. It looks as if he may have the edge on Krenner when Faust attacks Krenner while invisible. However, Dr. Ulof's guinea pig dies and, during the second time that he is invisible, Faust uncontrollably reverts from invisible to visible and back again. Despite these drawbacks, Faust forges ahead, intent on breaking free from Krenner's control.

Dr. Ulof reveals to Faust that both of them are dying from radiation poisoning as a side effect of the invisibility machine. He then convinces Faust to stop Krenner. Faust and Krenner fight in the lab until an accidental nuclear explosion kills them both and puts an end to Krenner's plans for world conquest.

The film was produced by Miller-Consolidated Pictures, which provided it a brief release in 1960. After the bankruptcy of Miller-Consolidated, The Amazing Transparent Man and Beyond the Time Barrier were picked up by American International Pictures for the lab costs and released again later in the year as a double feature. [4]

The Amazing Transparent Man was featured in episode #623 of Mystery Science Theater 3000 along with The Days of Our Years, a workplace safety short film. The episode debuted March 18, 1995 on Comedy Central. [5] The episode did not make the Top 100 list of episodes as voted upon by MST3K Season 11 Kickstarter backers. [6] Writer Jim Vorel concurred with the fans' opinion, ranking the episode #140 (out of 191 total MST3K episodes). Vorel calls The Amazing Transparent Man "instantly forgettable" and claims that the short "completely steals the show". [7]

The MST3K version of The Amazing Transparent Man was included as part of the Mystery Science Theater 3000, Volume XXXIX DVD collection released by Shout! Factory on November 21, 2017. The other episodes in the four-disc set include Girls Town (episode #601) and Diabolik (episode #1013). The fourth disc, titled "Satellite Dishes," collects non-movie segments from MST3K episodes that are unlikely to be collected on DVD. [8]

Mystery Science Theater 3000 is an American television comedy series created by Joel Hodgson. The show premiered on KTMA-TV in Minneapolis, Minnesota, on November 24, 1988. It was later broadcast on The Comedy Channel/Comedy Central for seven seasons until its cancellation in 1996. Thereafter, it was picked up by The Sci-Fi Channel and aired for three more seasons until another cancellation in August 1999. A 60-episode syndication package titled The Mystery Science Theater Hour was produced in 1993 and broadcast on Comedy Central and syndicated to TV stations in 1995. In 2015, Hodgson led a crowdfunded revival of the series with 14 episodes in its eleventh season, first released on Netflix on April 14, 2017, with another six-episode season following on November 22, 2018. A second successful crowdfunding effort in 2021 will bring at least 13 additional episodes to be shown through the Gizmoplex, an online platform that Hodgson will develop for future MST3K works starting in March 2022. As of 2021, 217 episodes and a feature film have been produced as well as three live tours.

Project Moonbase is a 1953 independently made black-and-white science fiction film, produced by Jack Seaman, directed by Richard Talmadge, and starring Ross Ford, Donna Martell, Hayden Rorke. It co-stars Larry Johns, Herb Jacobs, Barbara Morrison, and Ernestine Barrier. The film was distributed by Lippert Pictures and is based on a story by Robert A. Heinlein, who shares the screenwriting credit with producer Jack Seaman. 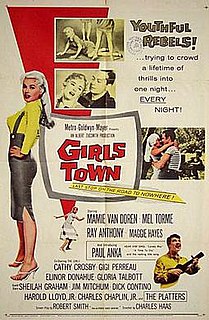 Girls Town is a 1959 film produced by Metro-Goldwyn-Mayer, starring Mamie Van Doren, Mel Tormé, and Ray Anthony. Paul Anka also appears in his first acting role. Van Doren stars as a juvenile delinquent who is sent to a girls' school run by nuns, where she finds herself unable to help her sister. The film capitalizes on the 1950s rebellious-teen exploitation films, with catfights, car races, music from Anka and The Platters, and sexy outfits.

Mitchell is a 1975 American action film directed by Andrew V. McLaglen, written by Ian Kennedy Martin, and starring Joe Don Baker as an abrasive police detective. The film was released in the United States on September 10, 1975 by Allied Artists Pictures Corporation.

Village of the Giants is a 1965 American teensploitation comedy science fiction film produced, directed and written by Bert I. Gordon. Based loosely on H. G. Wells's 1904 book The Food of the Gods and How It Came to Earth, it has elements of the beach party film genre. The story concerns a gang of rebellious youngsters who gain access to a chemical substance called "Goo", which causes living things to grow to gigantic proportions. The cast is composed almost entirely of teenaged actors and young adults portraying teenagers. Also making musical guest appearances are The Beau Brummels, Freddy Cannon, and Mike Clifford. 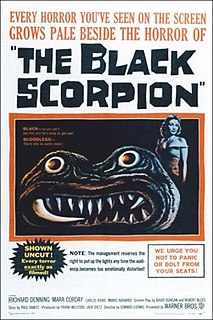 San Francisco International Airport is a television drama that was originally aired in the United States by NBC as a part of its 1970–71 wheel series Four in One. 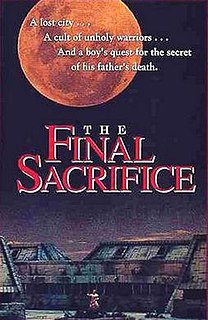 The Final Sacrifice is an independent Canadian adventure film released in 1990. It was directed by Tjardus Greidanus, a freshman at Southern Alberta Institute of Technology, and stars Christian Malcolm as Troy McGreggor and Bruce J. Mitchell as Zap Rowsdower.

The Projected Man is a 1966 British science fiction film directed by Ian Curteis, written by Peter Bryan, John C. Cooper, and Frank Quattrocchi, and starring Bryant Haliday, Mary Peach, Norman Wooland, Ronald Allen, and Derek Farr. It was released in the United States by Universal Studios, as a double bill with Island of Terror. The plot revolves around a scientist, Dr. Paul Steiner, experimenting with matter teleportation by means of a laser device. However, after a failed attempt at projecting himself, he becomes a disfigured monster who embarks on a murderous rampage.

The Corpse Vanishes is a 1942 American mystery horror film starring Bela Lugosi, directed by Wallace Fox, and written by Harvey Gates. Lugosi portrays a mad scientist who injects his aging wife with fluids from virginal young brides in order to preserve her beauty. Luana Walters as a journalist and Tristram Coffin as a small town doctor investigate and solve the disappearances of the brides. 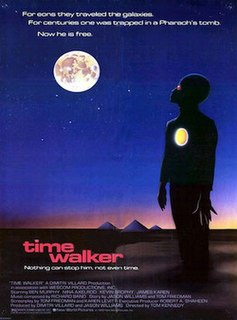 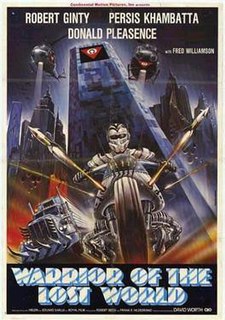 Warrior of the Lost World is a 1983 Italian post-apocalyptic science fiction film written and directed by David Worth and starring Robert Ginty, Persis Khambatta, and Donald Pleasence. It was created and first released in Italy under the title Il Giustiziere della terra perduta in 1983 during the wide popularity of the Mad Max films, and many subsequently created post-apocalyptic films of the 1980s. Later the film was given another Italian title for VHS and television markets, I predatori dell'anno Omega.

Teenage Caveman is an independently made 1958 black-and-white science fiction adventure film drama, produced and directed by Roger Corman, and starring Robert Vaughn and Darah Marshall. Teenage Caveman was released by American International Pictures in July 1958 as a double feature with How to Make a Monster.

Hercules is a 1958 Italian peplum film based upon the Hercules and the Quest for the Golden Fleece myths. The film stars Steve Reeves as the titular hero and Sylva Koscina as his love interest Princess Iole. Hercules was directed by Pietro Francisci and produced by Federico Teti. The film spawned a 1959 sequel, Hercules Unchained, that also starred Reeves and Koscina.

Santa Claus is a 1959 Mexican fantasy film directed by Rene Cardona and co-written with Adolfo Torres Portillo. In the film, Santa works in outer space and does battle with a demon named Pitch, sent to Earth by Lucifer to ruin Christmas by killing Santa and "making all the children of the Earth do evil". 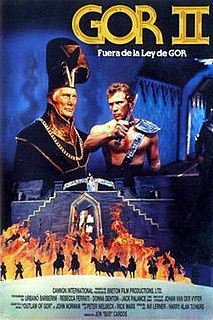 Outlaw of Gor is a 1988 American adventure fantasy science fiction film and a sequel to Gor directed by John Cardos. It is loosely based on the Gor novel series by John Norman, but has strong plot and qualitative differences from the original book Outlaw of Gor. 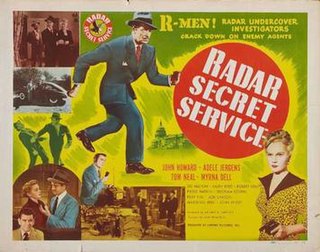 Radar Secret Service is a 1950 action film starring John Howard, produced by Barney A. Sarecky and directed by Sam Newfield. The film was featured on the American television show Mystery Science Theater 3000.

12 to the Moon is a 1960 independently made American black-and-white science fiction film, produced and written by Fred Gebhardt, directed by David Bradley and starring Ken Clark, Michi Kobi, Tom Conway and Anna-Lisa. The film was distributed in the U.S. by Columbia Pictures as a double feature with either Battle in Outer Space or 13 Ghosts, depending on the local film market.

Teen-Age Crime Wave is a 1955 American juvenile delinquency film noir crime film directed by Fred F. Sears and starring Tommy Cook and Molly McCart. It was released by Columbia Pictures. The plot concerns a pair of delinquent teens who go on a statewide shooting spree after escaping from reform school.