The Blue Room is a 1998 play by David Hare, adapted from the 1897 play Der Reigen written by Arthur Schnitzler (1862–1931), and more usually known by the French translation La Ronde .

Schnitzler completed the play in 1900, but did not intend it to be performed, even calling the series of scenes 'unprintable', he intended them to be read by friends. The play was too sexually explicit to be performed at the time. Subsequently, it was read and then performed in private. Its first public performance in 1921, under the now accepted title Reigen, was closed down by the Vienna police – Schnitzler was prosecuted for obscenity.

Reigen was meant as a dramatic exposé of the decadence of the Austrian society. Schnitzler, being a doctor approached the decadence of society from a medical point of view, studying the journey of syphilis through all classes of society. The title Reigen would be best translated as 'round-dance' or 'roundelay'. This refers to the daisy chain of sexual encounters, which also determines the format of the play. It is divided into ten scenes and each scene holds two characters (always male and female) and their sexual encounter. The following scene contains one character of the previous scene and a new one. A has sex with B, B has sex with C and so on; until in the tenth scene the circle closes with J having sex with A.

Hare's adaptation, called The Blue Room, [1] transfers the action from Vienna to 'one of the great cities of the world, in the present day'. The characters change accordingly, the soldier becomes a cab driver, the parlour maid becomes an au pair , etc...

Hare's major difference from the original piece is the idea of performing it as a two-person show. Hare states himself that he was not the first person to do so. In 1981 when the theatrical rights fell temporarily out of copyright several stage versions were crafted and performed. Otherwise Hare's adaptation is not far from the original.

Syphilis or any other sexually transmitted disease is never explicitly mentioned in either Schnitzler's original or Hare's adaptation. Scene VI contains the only reference to this when the politician is concerned about 'hygiene' having just slept with the model.

Sam Mendes had asked Hare to adapt Schnitzler's Reigen. The 1950 movie La Ronde by Max Ophüls was also based on Reigen and has influenced many stage adaptations, including The Blue Room.

Hare's adaptation was first performed at the Donmar Warehouse, London, on 10 September 1998 with Nicole Kidman and Iain Glen in lead roles. It was directed by Sam Mendes, designed by Mark Thompson, and lit by Hugh Vanstone, with music by Paddy Cunneen. London critic Charles Spencer's review for the Daily Telegraph concluded with the now iconic phrase, "It's pure theatrical Viagra." [2] The production was a commercial success and on 13 December of that year [3] moved to the Cort Theatre on Broadway, New York (with the same cast), but received mixed reviews. Kidman's brief nude appearance, a short flash of her buttocks on a semi dark stage, caused a hullabaloo and attributed for brisk ticket sales. [3] Glen's full frontal nudity while cartwheeling attracted far less attention. [4] [3] Several reviewers commented on the best seats to view Kidman's backside. [3] [4]

Hare's play was also performed to critical acclaim in Australia in 2002 with Sigrid Thornton and Marcus Graham in the two lead roles, and directed by Simon Phillips. The Sydney performances took place at the Theatre Royal after a run in Melbourne. The nude scenes and Thornton's "sexy" body were also noted. [5]

The independent film Cubes was structurally inspired by The Blue Room. Screenwriter Mark Zdancewicz transplanted the play's daisy chain structure into the modern office environment. The film, directed by Jason Sherry, follows a series of rotating cubicle partners over the course of a year.

Arthur Schnitzler was an Austrian author and dramatist.

A bedroom farce or sex farce is a type of light comedy, which centres on the sexual pairings and recombinations of characters as they move through improbable plots and slamming doors. The bedroom farce is perhaps the most common form of farce. 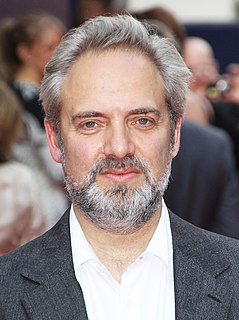 Sir Samuel Alexander Mendes is a British film and stage director, producer, and screenwriter. In theatre, he is known for his dark re-inventions of the stage musicals Cabaret (1993), Oliver! (1994), Company (1995), and Gypsy (2003). He directed an original West End stage musical for the first time with Charlie and the Chocolate Factory (2013). For directing the play The Ferryman, Mendes was awarded the Tony Award for Best Direction of a Play in 2019.

Cabaret is a 1966 musical with music by John Kander, lyrics by Fred Ebb, and book by Joe Masteroff. The musical was based on John Van Druten's 1951 play I Am a Camera which was adapted from Goodbye to Berlin (1939), a semi-autobiographical novel by Anglo-American writer Christopher Isherwood which drew upon his experiences in the poverty-stricken Weimar Republic and his relationship with nineteen-year-old cabaret singer Jean Ross. Nudity in film is the presentation in a film of at least one person who is fully or partly nude, showing one or more bare genitals, breast, or buttocks. In some films, nudity may be suggestive or implied, such as when a person seemingly naked is covered by a sheet, while in others it is explicit. Since the development of the medium, depiction in films of any form of sexuality has been controversial, and in the case of most nude scenes has had to be justified as being part of the story, in the concept of "artistically justifiable nudity", though some films contain "gratuitous nudity". Many actors and actresses have appeared nude, or exposing parts of their bodies or dressed in ways considered provocative by contemporary standards at some point in their careers.

Seduction is a play by Jack Heifner. It is an all male, gay adaptation of the 1897 play La Ronde by Arthur Schnitzler. 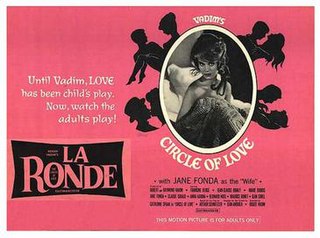 Circle of Love is a 1964 French drama film directed by Roger Vadim and based on Arthur Schnitzler's 1897 play Reigen. The film generated minor controversy because of Jane Fonda's nude scene, the first by a major American actress in a foreign film.

La Ronde is a controversial play with provocative sexual themes, written by Arthur Schnitzler in 1897. It scrutinizes the sexual morality and class ideology of its day through successive encounters between pairs of characters. By choosing characters across all levels of society, the play offers social commentary on how sexual contact transgresses class boundaries. Printed privately in 1900, it was not publicly performed until 1920, when it provoked strong reactions. The play's two titles —in German Reigen and in French La Ronde— refer to a round dance, as portrayed in the English rhyme Ring a Ring o' Roses.

The Cort Theatre is a Broadway theater at 138 West 48th Street, between Seventh Avenue and Sixth Avenue near Times Square, in the Theater District of Midtown Manhattan in New York City. It was built in 1912 and designed by architect Thomas W. Lamb for impresario John Cort. An annex to the west of the theater, built between 2021 and 2022, was designed by Kostow Greenwood Architects. The Cort Theatre has 1,092 seats across three levels and is operated by the Shubert Organization. Both the exterior and interior of the theater are New York City landmarks.

Hello Again is a musical with music, lyrics and book by Michael John LaChiusa. It is based on the 1897 play La Ronde by Arthur Schnitzler. It focuses on a series of love affairs among ten characters during the ten different decades of the 20th century. 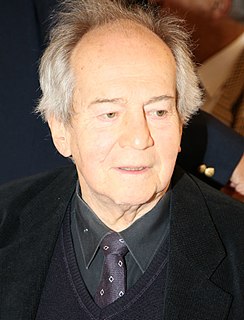 Joe DiPietro is an American playwright, lyricist and author. He is best known for the Tony Award-winning musical Memphis, for which he won the Tony Awards for Best Book of a Musical and Best Original Score as well as for writing the book and lyrics for the long-running off-Broadway show I Love You, You're Perfect, Now Change.

Frank Ulrich Marcus was a British playwright, best known for The Killing of Sister George.

Sex in film is the presentation of aspects of human sexuality in film. The presence of any form of sexuality in films has been controversial since the development of the medium. Some films containing such sexuality have been criticized by religious groups or have been banned or the subject of censorship by governments, or both. In countries with a film rating system, films containing sex scenes typically receive a restricted classification. Nudity in film may be regarded as sexual or as non-sexual.

Hilary Fannin is an Irish writer, playwright and actress. She is best known for her awarding winning weekly column Fiftysomething in the Irish Times. A founding member of Wet Paint Theatre she worked as an actress for much of the 1980s and 1990s. Her first play Mackerel Sky was performed at the Bush Theatre (1997). Her second, Sleeping Around, co-written with Mark Ravenhill, Abi Morgan and Stephen Greenhorn, was produced by Paines Plough and premiered at the Donmar Warehouse London (1998). Her third play, Doldrum Bay, debuted in the Peacock Theatre (2003); and in 2004 she was appointed joint writer-in-association at the Abbey Theatre for its centenary year. Her two most recent plays, an adaptation of Racine’s Phaedra (2010) and Famished Castle (2015) were produced by Rough Magic Theatre Company. Her radio dramas Dear Exile (2001) and Red Feathers (2002) have been broadcast by the BBC. A memoir Hopscotch (2015) and a first novel The Weight of Love (2020) were both published by Doubleday Ireland. She is married to the journalist Giles Newington and has two children.