The Book of the White Earl

The Book of the White Earl is an Irish religious and literary miscellany created c. 1404–1452.

The Book of the White Earl, now Bodleian Laud Misc. MS 610, consists of twelve folios inserted into Leabhar na Rátha, aka The Book of Pottlerath. It was created by Gaelic scribes under the patronage of James Butler, 4th Earl of Ormond (1392–1452). Henry and Marsh-Michel describe it as follows:

"The sumptuous initials of this book are not more or less servile repetition of twelfth-century work ... the work of the scribe also is dazzling. He plays like a virtuoso with various sizes of script, the larger size having a majestic decorative quality. The contents are no less remarkable; the 'Martyrology of Óengus', the 'Acallam na Senórach' and a dindsenchus. The foliage pattern is probably inspired by foreign models, but is so completely integrated that the borrowing is only realised on second thoughts. The initials are large, bold, and drawn in firm lines and bright colours"

Butler is admired for having been strongly Gaelicised. He was an Irish-speaker and seems to have been the very first of the Anglo-Irish lords to appoint a brehon, Domhnall Mac Flannachadha, for his service. Butler granted Mac Flannchadha lands in Tipperary.

The Cathach of St. Columba, known as The Cathach, is a late 6th century Insular psalter. It is the oldest surviving manuscript in Ireland, and the second oldest Latin psalter in the world. 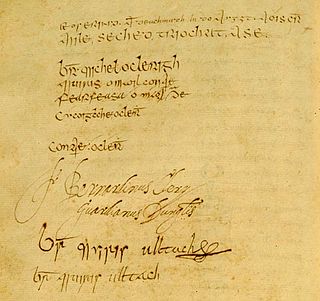 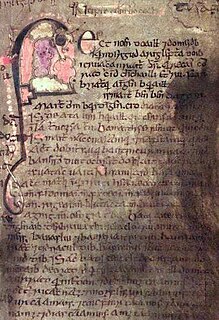 Áed mac Felidlimid Ó Conchobair, known as Áed na nGall, was king of Connacht alongside his father Felim from 1258 reigning solely from 1265 until his own death in 1274. He is credited with turning the tide on Norman expansion into Connacht at the Battle of Áth an Chip. Aed took a different approach than his father to dealing with English crown authority in Ireland, placing his faith in alliances with the Gaelic speaking world and becoming the chief supporter of Brian Ua Neill's bid to revive the high kingship of Ireland. His byname na nGall comes from his marriage in 1259 to a daughter of Dubhghall mac Ruaidri King of the Hebrides which brought him 160 gallowglass commanded by Dubhghall's younger brother Ailéan as a dowry. 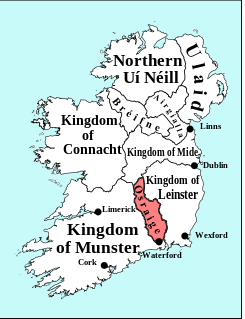 The kings of Osraige reigned over the medieval Irish kingdom of Osraige from the first or second century AD until the late twelfth century. Osraige was a semi-provincial kingdom in south-east Ireland which disappeared following the Norman Invasion of Ireland. A number of important royal Ossorian genealogies are preserved, particularly MS Rawlinson B502, which traces the medieval Mac Giolla Phádraig dynasty back through Óengus Osrithe, who supposedly flourished in the first or second century. and one in the Book of Leinster. Recent analysis of ninth and tenth century regnal succession in Osraige has suggested that in peaceful times, kingship passed primarily from eldest to youngest brother, before crossing generations and passing to sons and nephews.

Osraige or Osraighe, Osraí, anglicized as Ossory, was a medieval Irish kingdom comprising what is now County Kilkenny and western County Laois, corresponding to the Diocese of Ossory. The home of the Osraige people, it existed from around the first century until the Norman invasion of Ireland in the 12th century. It was ruled by the Dál Birn dynasty, whose medieval descendants assumed the surname Mac Giolla Phádraig. 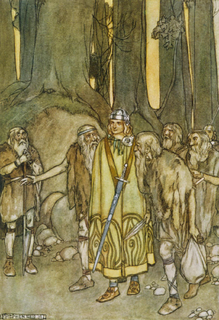 Events from the year 1348 in Ireland.

Events from the year 1337 in Ireland.

Events from the year 1331 in Ireland.

The Kings of Dál nAraidi were rulers of one of the main kingdoms of Ulster and competed with the Dál Fiatach for the overlordship of Ulaid.

Mac Amhlaoibh and Mac Amhalghaidh are two different Gaelic patronymic names with different origins and meanings, but which share the same or similar Anglicisations. These Gaelic names are borne by at least three unrelated native Irish clans or septs.

Risdeard Ó Conchubhair, Irish scribe and physician, 1561-18 October 1625. He was part of an Irish medical family in Gaelic Ireland.

Events from the year 1543 in Ireland.

Toirdhealbhach Donn Ó Briain was King of Thomond from 1499 to his death in 1528.