In late 2011, lead vocalist Craig Mabbitt announced an upcoming side-project, along with an upcoming album for Escape the Fate. Mabbitt revealed that a single from the side-project would be released in February 2012, and the album would be produced by Caleb Shomo of Beartooth. Members of the side project would include Kevin "Thrasher" Gruft of LoveHateHero who later went on to join Escape the Fate, TJ Bell of Escape the Fate and formerly of Motionless in White, Alex Torres formerly of Eyes Set to Kill, Greeley Estates, and Alesana. He hinted that the album will be a reminiscent of the music he made while in his previous bands Blessthefall and The Word Alive.

Mabbitt announced a tentative April 9 release date for the album, stating "what better day to release your album than on your birthday?", but this was later delayed. In January, he created a Facebook page and posted that he would stream a song from the side-project's upcoming EP if the page got to 50,000 "likes". [5] [ failed verification ] When the page got to around 49,500 likes, he revealed the title and lyrics for the upcoming song, titled "Edge of Reality". [6] The song "Edge of Reality" was released the moment the page reached 50,000 likes.

On March 30, he announced the name of the upcoming EP, Edge of Reality, under the band name "the Dead Rabbitts". On April 9, he released another song from the EP titled "World of Disaster".

In mid-2012, the Dead Rabbitts announced that they would be teaming with To Write Love on Her Arms and PledgeMusic with the release of the EP. Through PledgeMusic, fans were able to pre-order the EP along with extra items such as signed CDs, posters, concert tickets, and more. People who pre-ordered the album through the website, or "pledged", would also be able to download the album earlier than others. When the pre-orders hit the target goal, 5% of the money raised would be donated to To Write Love On Her Arms. Pledgers would also receive updates and exclusive videos. Mabbitt released certain songs from the EP when the target percentage of donations reached certain points, such as 55% or 75%. The target was reached on October 4, 2012, and the album was released on October 19.

The band set off on the "Pizza Party Tour" with bands Get Scared and Rob the Cartel and As Thick As Thieves The tour started in Tucson, Arizona on September 12, 2012, and ended September 29 in Sacramento, California.

In November 2013, Dead Rabbitts signed with Tragic Hero Records and announced that they will be releasing an album sometime in 2014. [7] In December, they began recording songs with Andrew Wade. [8] On May 16, the band released their first single "My Only Regret" from their debut album Shapeshifter, which was released on July 1, 2014. [9] [10] On November 7, the band released a music video from their song "Deer in the Headlights". [11] In 2015, lead guitarist Alex Torres left the band.[ citation needed ]

On October 25, 2019 the band confirmed Erik Jensen and Blake Bailey as permanent members via Facebook page, and released a single titled "Dead By Daylight" with guest vocalist Leila Rose, daughter of Craig Mabbitt. [14] This song is the debut single from the upcoming EP produced by Cameron Mizell at Chango Studios. [15] This song was written by Craig Mabbitt, and is based on the popular horror-survival video game, Dead by Daylight. On November 22, 2019. the band released their second single "Gutter" featuring Whitney Peyton and Courtney LaPlante from the second EP entitled "Break the Static" which was released on December 6, 2019. [16]

Archive are a musical group based in London, England, whose music spans electronic, trip hop, avant-garde, post-rock and progressive rock. Over their twenty-five-year history, the band has released ten studio albums and enjoyed established success throughout Europe.

James Lowery, also known as Anybody Killa, or ABK, is a rapper from Detroit, Michigan, whose stage persona is that of a Native American warrior. He is signed to Psychopathic Records. Prior to performing as ABK he performed as Native Funk.

A Static Lullaby was an American post-hardcore band that formed in Chino Hills, California, in 2001.

Scary Kids Scaring Kids (abbreviated SKSK) is an American post-hardcore band formed in Gilbert, Arizona, in 2002. The band's name was taken from the Cap'n Jazz song of the same name. The group disbanded following a farewell tour in 2010. In 2019 the group reunited for a 15 year anniversary reunion tour in 2020.

A shapeshifter is a mythic being that can change its physical shape. 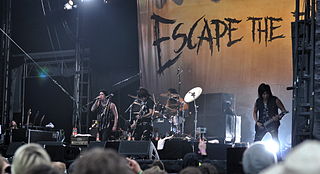 LoveHateHero was a rock band formed in Burbank, California in 2004 by vocalist Pierrick Berube, guitarists Josh Newman and Mark Johnston, bassist Paris Bosserman, and drummer Bryan Ross. They were signed to Ferret Music and released three albums, Just Breathe in May 2005, White Lies in February 2007, and America Underwater in November 2009. 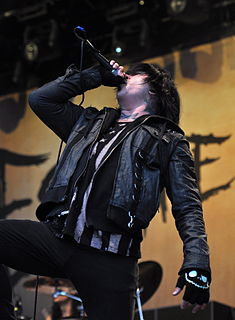 Alexander Ray "Alex" Torres is an American musician, best known for being the guitarist of metalcore and post-hardcore bands Eyes Set to Kill, Greeley Estates, Alesana, and The Dead Rabbitts.

Escape the Fate is the third studio album by American post-hardcore band Escape the Fate. It was released worldwide on November 2, 2010. It is the band's first and only album released on DGC/Interscope following their departure from Epitaph Records. The album charted No. 25 on the Billboard 200, No. 1 at Hard Rock Albums, No. 14 in a Rock Albums, No. 13 in Alternative and Independent charts and No. 118 in Digital Albums Chart. Upon release, the album has received generally positive reviews, and is Escape the Fate's most successful album to date.

The Word Alive is an American metalcore band from Phoenix, Arizona, United States. Formed in 2008, the band is signed to Fearless Records. The band currently consists of vocalist Tyler Smith, guitarists Zack Hansen and Tony Pizzuti, and drummer Matt Horn. The group has had several line-up changes throughout their career, with Hansen and Pizzuti as the only remaining founding members. Their 2009 label debut, Empire reached No. 15 on the Top Heatseekers, meeting a great amount of positive acclaim upon its release in 2009. The following year, the group recorded and released their debut full-length album, Deceiver on August 31, 2010, which reached No. 97 on the Billboard 200 and 15 on Independent Albums.

"Issues" is a single by Escape the Fate off of their 2010 self-titled album. It was released as a digital single on iTunes September 14, 2010. However, the song leaked early via KROQ Radio on September 9, 2010. This song debuted at No. 48 on America's Music Charts for Active Rock, and peaked at No. 27 on the Billboard Hot Mainstream Rock Tracks chart, and debut No. 32 on both the Billboard Alternative Songs chart, and No. 39 on the Billboard Rock Songs chart.

Ungrateful is the fourth studio album by American rock band Escape the Fate. Several of the tracks on the album were produced by John Feldmann, who also produced the band's second album This War Is Ours; however, other tracks were self-produced by the band. It is the only album to feature Michael Money as an official member on rhythm guitar and TJ Bell on bass, as well as the last one with lead guitarist Monte Money. Monte and Michael Money left the band in October 2013 and TJ Bell was moved to rhythm guitar. The album was released on May 14, 2013 through Eleven Seven Music.

Shapeshifter is the debut album by American metalcore band The Dead Rabbitts. It was released on July 1, 2014.

Pvris is an American rock band from Lowell, Massachusetts, formed by members Lynn Gunn, Alex Babinski, and Brian MacDonald. The band formed originally under the name Paris but later changed it to Pvris in the summer of 2013 citing legal reasons. They released a self-titled EP and an acoustic EP before signing to Rise and Velocity Records. They released the single "St. Patrick" on June 24, 2014, along with a music video. They released their debut album, White Noise, in November 2014, and the deluxe version of White Noise on April 22, 2016. On August 25, 2017, they released their second album All We Know of Heaven, All We Need of Hell. They released their third EP, Hallucinations, on October 25, 2019.

Monte Bryan Money is an American guitarist and vocalist from Las Vegas, Nevada. He is the former lead guitarist and backing vocalist of American post-hardcore band Escape the Fate. After his departure from Escape the Fate, he formed a new band as the lead singer, with his brother Michael Money, named Beyond Unbroken.