The Fixtape Vol. 1: Smoke on This

The Fixtape Vol. 1: Smoke on This is a solo album by Krayzie Bone. It was his first 'street' album, released by RBC Records, and has since been followed by three further volumes. [2] He explained the album's title: "It's not a mixtape and it isn't a whole new album; it's somewhere in the middle, so I called it a 'fixtape'". [3] The track "Stay Down" features a guest appearance from Akon. [1]

Aliaune Damala Badara Akon Thiam is an American-Senegalese singer, songwriter, record producer, entrepreneur, philanthropist and actor. He rose to prominence in 2004 following the release of "Locked Up", the first single from his debut album, Trouble.

The album received a 'Large' rating from XXL magazine, in whose view its "misses slightly outweigh its hits". [1]

XXL is an American hip hop magazine, published by Townsquare Media, founded in 1997. 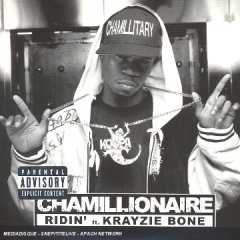 Bizzy Bone's discography includes 15 studio albums, 6 compilation albums and 6 singles. American rapper Bizzy Bone has released albums under 11 different record labels during his career and has been signed to major labels Virgin Records and Warner Bros. Records. He is currently signed to record label 7th Sign. Bizzy Bone has had 8 albums chart on the Billboard 200 chart. His debut album, Heaven'z Movie, released in 1998, peaked at no. 3 on the Billboard 200 and was certified gold in the United States. Bizzy Bone has also released 22 music videos and 10 collaboration albums. He has made collaboration albums with artists including Layzie Bone and Bad Azz.

Stay Down may refer to:

The Fixtape Vol.4: Under the Influence is a solo mixtape/album by Bone Thugs-n-Harmony member, Krayzie Bone and the fourth in the Fixtape series.

RBC Records is an online independent record label and management company founded by partners Brian Shafton and Bob Grossi. It provides artists and independent labels with a full-service "virtual label" alternative to signing with a major label. RBC provides distribution, sales, marketing, online publicity, radio promotion, video promotion, product management, and creative services consulting to artists and management. The company announced in 2013 that it would start producing and distributing films under the name RBC Films.

Chasing The Devil: Temptation is the fourth studio album by American rapper Krayzie Bone, released on November 20, 2015 under RBC Records.