The Four-Chambered Heart is a 1950 autobiographical novel by French-born writer Anaïs Nin, part of her Cities of the Interior sequence. It is about a woman named Djuna, her love, her thoughts, her emotions, her doubts, her decisions, and her sacrifices. It is not considered as one of Nin's most noteworthy novels, yet it continues to be referenced in various studies and discussions regarding Nin and her body of work.

The story behind the story

The story is based on Nin's own experiences and destructive love relationship with Gonzalo Moré, Peruvian poet and bohemian. They met in 1936 and their relationship lasted for a decade. It is Nin's diaries during this time that have translated into this novel about her alter ego Djuna.

In the novel, the character Djuna falls in love with Rango and becomes entangled in his chaotic life. She is introduced to Zora, Rango's wife, a former dancer who has fallen into a morass of hypochondria and self-centered manipulation. These characters, of course, are modeled after Nin, Moré, and his wife Helba Huara.

When Nin met Moré in 1936 his wife was an invalid, after having been a widely renowned exotic dancer, both in Europe and on Broadway, and the couple were impoverished and living in a basement. Nin rented a house boat on the Seine, which was used for Nin's and Moré's amorous meetings. The house boat also appears in The Four-Chambered Heart.

Nin's relationship with Moré was full of passion, lust and sexual fury, which is reflected in the story of The Four-Chambered Heart. Nin's love for Moré made her try to rehabilitate him and get him to make something of his, in her eyes, huge talent. She failed in this attempt, being sucked into his and his wife's destructive lives. After three years of passionate struggle she fled Paris when World War II started, and returned to New York. She brought Moré with her and employed him in a printing press enterprise she started on her own, ultimately trying to rip apart the destructive cord to his wife and make him learn a craft of his own. Her efforts proved fruitless in the end, and Moré did poorly, leaving her to have to do most of the job herself. The relationship finally ended in 1948. Nin says in her 1948 diary: “The Gonzalo I loved is dead. The one I knew at the end, without illusion, I did not love. People create an illusion together and then it is disintegrated by reality.“ [1]

The remains of this destructive relationship is this novel, The Four-Chambered Heart, in which she tries to describe the anguish and the passion she felt in her decade-long relation with Moré.

Angela Anaïs Juana Antolina Rosa Edelmira Nin y Culmell, known professionally as Anaïs Nin was a French-Cuban American diarist, essayist, novelist, and writer of short stories and erotica. Born to Cuban parents in France, Nin was the daughter of composer Joaquín Nin and Rosa Culmell, a classically trained singer. Nin spent her early years in Spain and Cuba, about sixteen years in Paris (1924–1940), and the remaining half of her life in the United States, where she became an author.

Djuna Barnes was an American artist, illustrator, journalist, and writer who is perhaps best known for her novel Nightwood (1936), a cult classic of lesbian fiction and an important work of modernist literature. 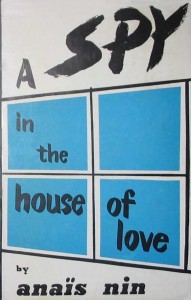 A Spy in the House of Love is a novel by Anaïs Nin published in 1954. Alongside her other novels, Ladders to Fire, Children of the Albatross, The Four-Chambered Heart and Seduction of the Minotaur, which were all first published in the United States between the 1940s and 1960s, A Spy in the House of Love was gathered into a collection of her novels known as Cities of the Interior. 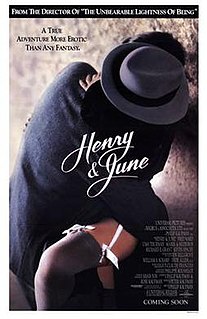 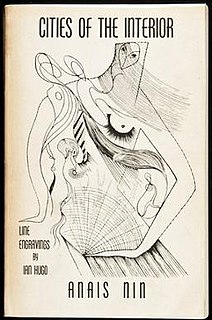 Cities of the Interior is a novel sequence published in one volume containing the five books of Anaïs Nin's "continuous novel": Ladders to Fire, Children of the Albatross, The Four-Chambered Heart, A Spy in the House of Love and Seduction of the Minotaur. This combined volume was first published, by the author, in 1959. Its central figures are three women resembling different aspects of the author, and in some superficial ways June Miller. In some of the books they interact with each other, with a painter resembling Henry Miller and with South Americans resembling Gonzalo Moré and Helba. Most of the content is taken from her diaries, polished and thinly disguised. It was followed by her last novel Collages.

The Home and the World is a 1916 novel by Rabindranath Tagore. The book illustrates the battle Tagore had with himself, between the ideas of Western culture and revolution against the Western culture. These two ideas are portrayed in two of the main characters, Nikhilesh, who is rational and opposes violence, and Sandip, who will let nothing stand in his way from reaching his goals. These two opposing ideals are very important in understanding the history of the Bengal region and its contemporary problems.

Emily Holmes Coleman (1899–1974) was an American born writer, and a lifelong compulsive diary keeper. She also wrote a single novel, The Shutter of Snow (1930). This novel, about a woman who spends time in a mental hospital after the birth of her baby, was based on Coleman's own experience of spending time in an insane asylum after contracting puerperal fever and suffering a nervous breakdown. 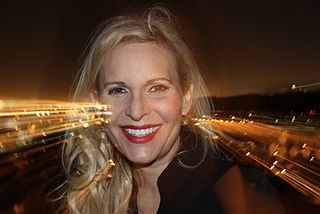 Kim Krizan is an American writer and actress best known for originating the characters in the "Before" series with her writing on Before Sunrise (1995) and Before Sunset (2004), for which she was nominated for an Academy Award for Best Adapted Screenplay and a Writers Guild Award. Both films were based on characters she created with Richard Linklater. Krizan currently resides in Los Angeles, where she writes and teaches writing courses, most notably at UCLA.

Perro Amor is a Spanish-language telenovela produced by the United States-based television network Telemundo that originally ran in the United States from January to July 2010. This is a Colombian remake of the 1998 Cenpro Televisión daily telenovela Perro Amor, written by Natalia Ospina and Andrés Salgado. As with most of its other telenovelas, Telemundo broadcast English subtitles as closed captions on CC3.