The Funeral (お葬式, Osōshiki) is a 1984 Japanese comedy film by director Juzo Itami.

The film shows the preparations for a traditional Japanese funeral. It mixes grief at the loss of a husband and father with wry observations of the various characters as they interact during the three days of preparation.

The Funeral was the writing and directing debut of Itami Juzo, and was an enormous success in Japan. It won five Japanese Academy Awards in 1985, including Best Film, Best Director and Best Actor for Tsutomu Yamazaki. [1] It was nominated in a further five categories and also came first in the annual Kinema Junpo critics' poll.

Shokichi Amamiya (Hideji Otaki) is a difficult 69-year-old man, married to Kikue (Kin Sugai). He dies suddenly of a heart attack, and it falls to his daughter Chizuko (Nobuko Miyamoto) and son-in-law Wabisuke Inoue (Tsutomu Yamazaki) to organize the funeral at their house.

Among other things, the family have to choose a coffin, hire a priest, hold a wake, learn formal funeral etiquette and hold the service itself.

During the three days of preparation, various tensions within the family are hinted at, such as resentment of a rich but stingy uncle, Inoue's affair with a younger woman, and possibly an affair the dead man himself had with a female gateball player.

After the service, the long suffering wife delivers a dignified speech to the family regretting that the hospital would not let her be with her husband as he died. 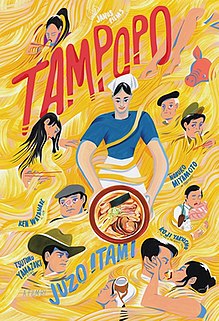 Tampopo is a 1985 Japanese comedy film written and directed by Juzo Itami, and starring Tsutomu Yamazaki, Nobuko Miyamoto, Kōji Yakusho, and Ken Watanabe. The publicity for the film calls it the first "ramen western", a play on the term Spaghetti Western. 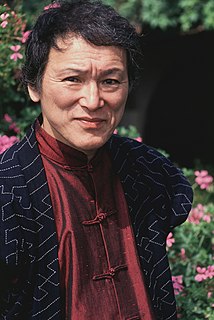 Juzo Itami, born Yoshihiro Ikeuchi, was a Japanese actor, screenwriter and film director. He directed eleven films, all of which he wrote himself.

Nobuko Miyamoto is a Japanese actress. She was born in Otaru, Hokkaidō, and raised in Nagoya. She was married to director Juzo Itami from 1969 until his death in 1997, and regularly starred in his films. 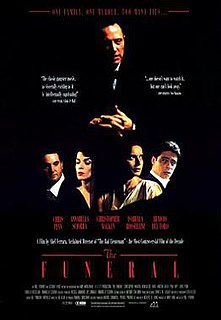 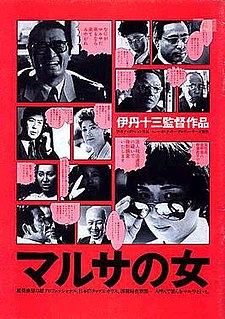 A Taxing Woman is a 1987 Japanese film written and directed by Juzo Itami. It won numerous awards, including six major Japanese Academy awards. 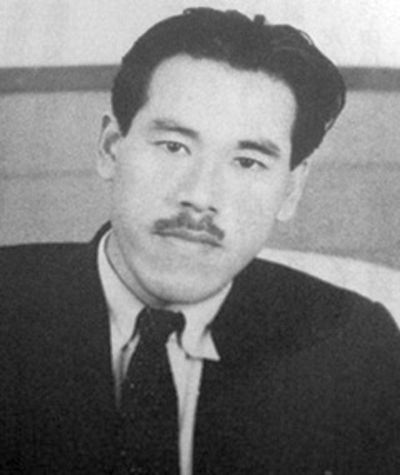 Mansaku Itami was a Japanese film director and screenwriter known for his critical, sometimes satirical portraits of Japan and its history. He is the father of the director Juzo Itami.

Minbo is a 1992 Japanese film by filmmaker Juzo Itami. It is also known by the titles Minbo: the Gentle Art of Japanese Extortion, The Gangster's Moll and The Anti-Extortion Woman. The film was widely popular in Japan and a critical success internationally. It satirizes the yakuza, who retaliated for their portrayal in the film by assaulting the director. 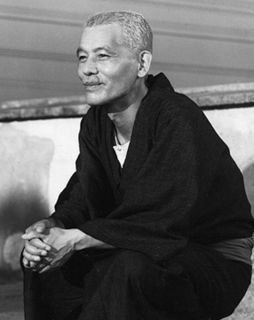 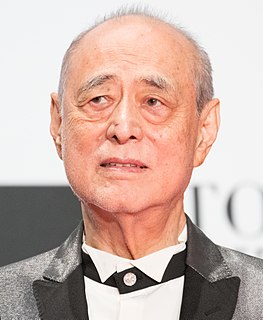 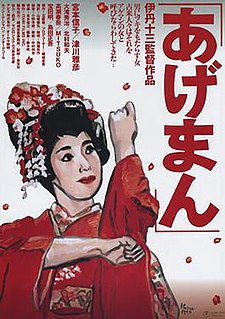 A-Ge-Man: Tales of a Golden Geisha is a 1990 Japanese comedy film directed and written by Juzo Itami. It stars Nobuko Miyamoto as a geisha who brings good luck to her intimate companions and Masahiko Tsugawa as her unfaithful, sometimes partner.

Departures is a 2008 Japanese drama film directed by Yōjirō Takita and starring Masahiro Motoki, Ryōko Hirosue, and Tsutomu Yamazaki. The film follows a young man who returns to his hometown after a failed career as a cellist and stumbles across work as a nōkanshi—a traditional Japanese ritual mortician. He is subjected to prejudice from those around him, including from his wife, because of strong social taboos against people who deal with death. Eventually he repairs these interpersonal connections through the beauty and dignity of his work.

Mitsuko Yoshikawa was a Japanese actress. She debuted during the silent film era in 1926 and made her last film in 1984, which was Juzo Itami's The Funeral. 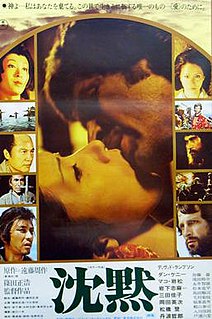 Silence is a 1971 Japanese historical drama film directed by Masahiro Shinoda, based on the novel of the same name by Shūsaku Endō. It stars Tetsurō Tamba, Mako, Eiji Okada, and Shima Iwashita alongside English actors David Lampson and Don Kenny. Endo co-wrote the screenplay with Masahiro Shinoda. Most of the film's dialogue is in Japanese, though it has short sequences in English. It was entered Un Certain Regard into the 1972 Cannes Film Festival, and won four Mainichi Film Awards including Best Film and Best Director.

Grass Labyrinth is a Japanese film directed by Shūji Terayama which was released in France in 1979 and in Japan in 1983. 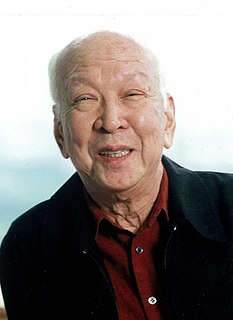 Hideji Ōtaki was a Japanese actor.

The Abe Clan is a 1995 Japanese historical television film directed by Kinji Fukasaku. It is an adaptation of the 1913 Japanese short story "Abe ichizoku" by Mori Ōgai, which had previously been adapted into a 1938 theatrical film directed by Hisatora Kumagai and released by Toho.