The Journalist (新聞記者, Shinbun Kisha) is a 2019 Japanese drama film loosely based on the 2017 book of the same name by Isoko Mochizuki, directed by Michihito Fujii. It received 6 Japan Academy Prize nominations and won three, including Picture of the Year, Outstanding Performance by an Actor in a Leading Role and Outstanding Performance by an Actress in a Leading Role. [1]

Young journalist Erika Yoshioka works at Tokyo Metropolitan News where her father committed suicide under suspicion of falsifying news. Yoshioka's boss Mr. Jinya entrusts her with investigating a government plan to establish a new university that has arrived by anonymous fax.Her research leads to Mr. Kanzaki a Cabinet Official who soon commits suicide. The investigation next takes her to Takumi Sugiyama, an earnest official in the Cabinet Intelligence and Research Office. Plagued with doubts over Kanzaki's death, Sugiyama agrees to work with Yoshioka to uncover the scandal that may derail their careers.

Best Actor is the name of an award which is presented by various film, television and theatre organizations, festivals, and people's awards to leading actors in a film, television series, television film or play. The first Best Actor award was awarded for acting in a film, on May 16, 1929 by the Academy of Motion Picture Arts and Sciences (AMPAS) at the Academy Awards to Emil Jannings for his role of Grand Duke Sergius Alexander in The Last Command and August Schilling in The Way of All Flesh. In theatre, it was first awarded on April 6, 1947 by the American Theatre Wing and The Broadway League at the Tony Awards to José Ferrer for his role of Cyrano de Bergerac in Cyrano de Bergerac and to Fredric March for his role of Clinton Jones in Years Ago. In television, it was first awarded on January 23, 1951 by Academy of Television Arts & Sciences at the Primetime Emmy Awards to Alan Young for his role of himself in The Alan Young Show. In a film festival, presented as the Volpi Cup, it was first awarded between August 1–20, 1934 by the Venice Film Festival to Wallace Beery for his role of Pancho Villa in Viva Villa!

Boys Be... is a manga series written by Masahiro Itabashi and illustrated by Hiroyuki Tamakoshi. It was later adapted into a 13 episode anime television series by Hal Film Maker in 2000.

Go is a 2001 coming-of-age movie, directed by Isao Yukisada, based on Kazuki Kaneshiro's novel of the same title, which tells the story of a Japanese-born North Korean teenager Sugihara and a prejudiced Japanese girl Tsubaki Sakurai whom he falls for. 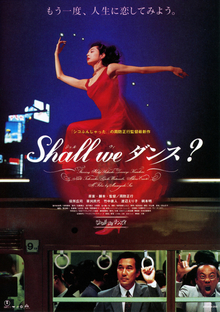 Shall We Dance? is a 1996 Japanese romantic comedy-drama film directed by Masayuki Suo. Its title refers to the song "Shall We Dance?" which comes from Rodgers and Hammerstein's The King and I. It inspired the 2004 American remake of the same name. 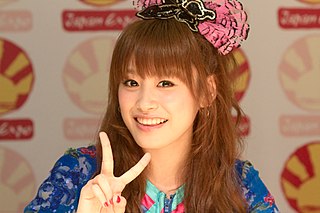 Ai Takahashi is a Japanese pop singer and actress who is formerly associated with the Hello! Project and is best known as the leader of Morning Musume and Hello! Project until 2011. She is also a former member of its popular subgroup Mini Moni. 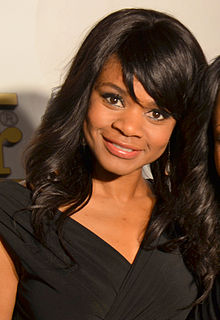 Hajime Sugiyama was a Japanese field marshal and one of the leaders of Japan's military throughout most of World War II. As Army Minister in 1937, Sugiyama was a driving force behind the launch of hostilities against China in retaliation for the Marco Polo Bridge Incident. After being named the Army’s Chief of Staff in 1940, he became a leading advocate for expansion into Southeast Asia and preventive war against the United States. Upon the outbreak of hostilities in the Pacific, Sugiyama served as the army’s commander-in-chief until his removal by Prime Minister Hideki Tojo in February 1944. Following Tojo's ouster in July 1944, he was reappointed to the post of Army Minister in Kuniaki Koiso's cabinet until its dissolution in April 1945. Ten days after Japan's surrender on 2 September 1945, he committed suicide.

Erika Sawajiri is a Japanese former actress, singer, and model. After starting out as a junior model, Sawajiri transitioned to acting in 2002 and has starred in Break Through!, Shinobi: Heart Under Blade, and 1 Litre of Tears, for all of which she received several newcomer acting awards. Sawajiri also launched a singing career through the 2006 television drama Taiyō no Uta, where her first commercially-released song of the same name was certified Million by the Recording Industry Association of Japan. She later released solo music under the name Erika. 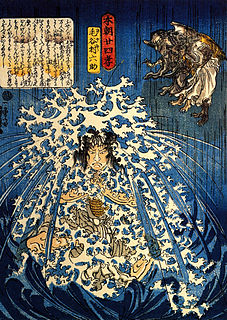 Keyamura Rokusuke is one of the leading characters in the ningyō jōruri and kabuki play Hiko-san Gongen chikai no sukedachi (彦山権現誓劔) and in some other plays. The farmer turned samurai is known for his filial piety and incredible strength, and is viewed as an ideal samurai.

Rumiko Takahashi Anthology, also known as Rumic Theater, is a manga collective composed of many short stories written and illustrated by Rumiko Takahashi. New stories are published annually in Shogakukan's Big Comic Original magazine since 1987. In Japanese it has been published under several different names, including Takahashi Rumiko Gekijō (高橋留美子劇場) and Takahashi Rumiko Kessakushū (高橋留美子傑作集). Some editions are numbered 1–4 while other editions are unnumbered; volume 5 currently only exists in an unnumbered edition. A thirteen episode anime adapted from these short stories was released under this name in 2003, followed by the sequel series Rumic Theater: Mermaid Forest, adapting Takahashi's Mermaid Saga. A TV drama based on the stories was broadcast in 2012. 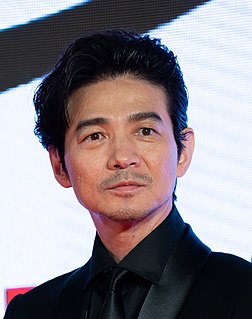 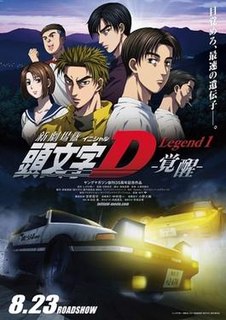 New Initial D is a 2014–2016 Japanese anime film series based on the manga series Initial D by Shuichi Shigeno. The movie is a retelling of the early stages of the manga and is split into three parts with the first part, Legend 1: Awakening released on August 23, 2014. The full trailer was revealed on 16 May 2014, containing an entirely new Japanese cast. In the English dub, however, most of the Funimation cast from the original series reprised their roles for the trilogy. 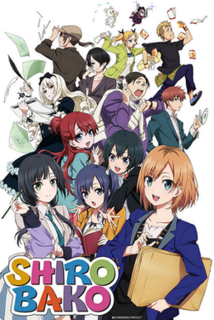 Shirobako is a 24-episode anime television series produced by P.A.Works and directed by Tsutomu Mizushima. It aired in Japan between October 9, 2014 and March 26, 2015. A manga adaptation began serialization in ASCII Media Works's Dengeki Daioh magazine in September 2014, and a novel was published by Shueisha in January 2015. An anime film premiered on February 29, 2020.