The Kirishima Thing (桐島、部活やめるってよ, Kirishima, bukatsu yamerutteyo) is a 2012 Japanese high school drama film directed by Daihachi Yoshida and based on a novel by Ryo Asai. It was released on August 11, 2012. [1] The film won several awards, including the Japan Academy Prize for Picture of the Year, [2] and also received several nominations.

Kirishima is a popular second-year high school student. He is captain of the volleyball team, does well academically, and is dating one of the most popular girls in the school. One day he suddenly stops showing up to school, and rumors begin circulating that he's quitting the volleyball club.

The same day, the school's film club is mocked during morning assembly for the title of a romantic film they were forced to make by their teacher. Against their teacher's wishes, they decide to begin filming a zombie movie. While filming, they run into Sawajima, the captain of the brass band club. Sawajima has a crush on Hiroki, Kirishima's best friend and popular girl Sana's boyfriend. Sawajima is trying to impress Hiroki by nonchalantly playing saxophone within view of him, but she is unsuccessful at impressing the boys and instead ends up disrupting the film club's filming.

In Kirishima's absence the smaller Koizumi is made the volleyball team's libero. During the weekend, Kirishima continues to remain unreachable. The volleyball team loses a match against another school, which upsets the larger and quick-tempered Kubo, who blames Koizumi and the absent Kirishima.

Outside of school, film club head Maeda runs into badminton club member Kasumi, who unlike the other girls treats him with respect and shows interest in the zombie film. Maeda develops feelings for Kasumi, though he later discovers that she is secretly dating Kirishima's friend Ryuta. Other badminton club member Mika shows sympathy for Koizumi over Kubo's harsh treatment.

Sawajima overhears Sana and Hiroki planning to meet after school, and goes to their meetup spot before them in order to play saxophone, again unintentionally disrupting the film club. The film club agree to leave to instead go film on the school's roof. As Sana arrives and sees Sawajima waiting, she kisses Hiroki out of jealousy, causing Sawajima to run off.

In the school gym, Kubo's anger with Koizumi boils over, but just before he begins beating Koizumi up, Tomohiro runs in and says Kirishima is on the roof of the school. Kirishima's friends, the volleyball club boys, badminton club girls, and Risa and Sana all run to the school's roof, but they find only the film club with no sign of Kirishima. Kubo takes his anger out on the film club, leading to a brawl in which everybody's emotions and frustrations come out.

Koizumi is a Japanese family name.

Mikako Takahashi is a Japanese voice actress and J-Pop singer from Chiba Prefecture, Japan. As the Excel Saga character Mikako Hyatt, she forms one half of the voice acting duo The Excel Girls. She is employed by I'm Enterprise. She is also the best knowing dubbing roles of Korean drama and films, like for Park Shin-hye, Shin So-yul and others.

Ultra Maniac is a manga series written by Wataru Yoshizumi. The romantic comedy series features 7th grader Ayu Tateishi, a tennis club member, and her transfer student friend, Nina Sakura, who is actually a trainee witch from the magical kingdom. It premiered in Shueisha's Ribon manga magazine in February 2001 and ran until January 2004. It was also published in five collected volumes by Shueisha. Viz Media licensed and released an English translation of the series in North America.

Sakuran, is a manga series by Moyoco Anno. The manga is about a girl who goes through different names throughout the story and becomes a tayu or oiran courtesan. North American publisher Vertical Inc published it in English in July 2012.

Toyota Auto Body Queenseis is a women's volleyball team based in Kariya city, Aichi, Japan. It plays in V.League Division 1. The club was founded in 1951. The owner of the team is Toyota Auto Body.

Love Com, also known as Lovely Complex, is a romantic comedy shōjo manga by Aya Nakahara. It was published by Shueisha in Bessatsu Margaret from 2001 to 2006 and collected in 17 tankōbon volumes. The series is about the romance between a tall girl and a short boy who are treated as a comedy duo by their classmates. In 2004, it received the 49th Shogakukan Manga Award for shōjo.

Newtonbrook Secondary School is a high school for Grades 9 to 12 in the Newtonbrook neighborhood in Toronto, Ontario, Canada.

Miyuki Maeda is a Japanese female international badminton player from the Renesas badminton club. She competed in three Asian Games editions from 2006 to 2014.

Risa Shinnabe was a retired professional Japanese volleyball player who played for Hisamitsu Springs. She also played for the All-Japan women's volleyball team. She won a bronze medal with the Japanese team at the 2012 Summer Olympics.

The Complex is a 2013 Japanese horror film directed by Hideo Nakata. The film premiered at the Rotterdam Film Festival on January 1, 2013, and was released in Japan on May 18 that same year. A 12 episode drama, titled Kuroyuri Danchi ~Josho~ follows events leading up to those that take place in the film. It began airing in Japan on April 9, 2013. In May 2018, the series was released in the United States on Toku. 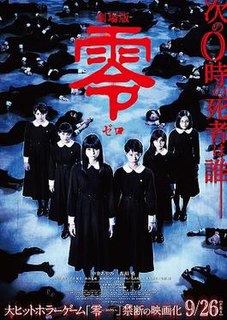 Gekijōban Zero, also known as Fatal Frame: The Movie, is a 2014 Japanese horror film directed by Mari Asato, starring Ayami Nakajō and Aoi Morikawa, and based on a novelization by Eiji Ōtsuka of the Fatal Frame video game series. It was released on 26 September 2014.

Cops vs. Thugs is a 1975 Japanese yakuza film directed by Kinji Fukasaku. It won two Blue Ribbon Awards in 1976: Best Director (Fukasaku) and Best Actor (Sugawara). Complex named it number 6 on their list of The 25 Best Yakuza Movies. Kino International released the film on DVD in North America in 2006. 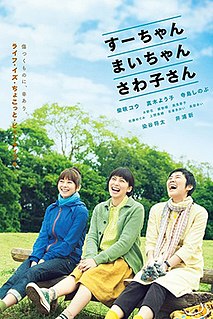 Sue, Mai & Sawa: Righting the Girl Ship is a 2012 Japanese drama film directed by Osamu Minorikawa and based on the manga series Su-chan by Miri Masuda. It premiered at the 25th Tokyo International Film Festival on October 24, 2012 and was released in Japan on March 2, 2013. 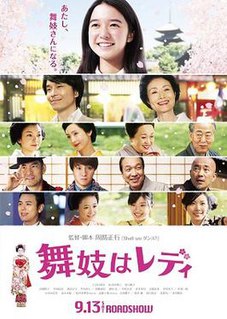 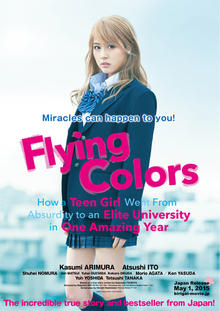 Flying Colors is a 2015 Japanese youth comedy drama film directed by Nobuhiro Doi, based on a true story. The film was released on May 1, 2015 in Japan.

Tokyo Tribe is a 2014 Japanese live-action musical action comedy film adaptation of the Japanese manga series Tokyo Tribes by Santa Inoue. It was directed by Sion Sono and was released in Japan on August 30, 2014.