The Lost Prince is a British television drama about the life of Prince John – youngest child of Britain's King George V and Queen Mary – who died at the age of 13 in 1919. [1]

A Talkback Thames production written and directed by Stephen Poliakoff, it was originally broadcast in January 2003. It won three Emmy Awards in 2005. [2] [3] [4]

John had epileptic seizures and an autism-like developmental disorder, and the Royal Family tried to shelter him from public view; the script did not present the Royal Family as unsympathetic, instead showing how much this cost them emotionally (particularly John's mother, Queen Mary). Poliakoff explores the story of John, his relationship with his family and brother Prince George, the political events going on at the time (such as the fall of the House of Romanov in 1917) and the love and devotion of his nanny, Charlotte Bill (Lalla).

Episode One A spellbound young Prince John gazes as his family attend an elaborate birthday party for his pampered and indulged grandmother Queen Alexandra in December 1908, held at Sandringham in Norfolk during the winter.

When summer arrives there is much excitement again as Tsar Nicholas II, Tsarina Alexandra, and their children, visit their relatives, the British royals, on the Isle of Wight. The Russians entrance Prince John with their exotic splendour. It is clear, even at this stage, that Johnnie, a charming and attractive boy, has an eccentric view of the world and is uninhibited in a way that is alien to his parents. His ailing grandfather, King Edward VII, loves him for his frankness. It is clear also that his nanny, Lalla, is reluctant to reveal the seriousness of his medical condition.

While the populace of the capital gaze into the night skies to catch a glimpse of an approaching comet, Johnnie's parents are called to Buckingham Palace to be by the King's deathbed.

During the funeral attended by many of the heads of state of Europe, including Kaiser Wilhelm of Germany, Johnnie has a serious epileptic seizure. Queen Mary, Johnnie's mother, summons doctors to examine him and their diagnosis confirms her and Lalla's worst fears. Lalla volunteers to look after Johnnie to prevent him being sent to an institution. The two of them are to be sent to Sandringham, where Johnnie is to be prevented from encountering anybody but the closest members of his family.

His sibling, Prince George, who has always treasured Johnnie, swears to protect him. Johnnie, now a few years older, is deprived of the company of any children and finds the schooling of his tutor, Hansell, unfathomable. Although lonely, he always takes an optimistic view of life. Then one day, to the acute embarrassment of King George V and Queen Mary, he speaks his mind at a tea party held for Prime Minister H. H. Asquith and his Chancellor of the Exchequer, Lloyd George.

Johnnie is brought to London to be re-examined by the doctors. During his stay he is taken by his brother George up to the minstrel's gallery looking down on the banqueting hall of Buckingham Palace, to observe a grand state occasion. The assembled dignitaries are chattering feverishly about the poise with which the Queen has dealt with the intrusion of a suffragette, who has confronted the Queen to demand her support for women's suffrage.

During the banquet Asquith and Lloyd George are called back to Downing Street to receive the news that is to prove to be the catalyst for the start of the First World War.

The following morning Johnnie receives a rare meeting with his father King George, who shows him his treasured stamp collection. Johnnie is more interested in his father's pet parrot, Charlotte. Suddenly, father and son are interrupted by the King's Private Secretary, Lord Stamfordham, who has come to relay the news of the assassination of Archduke Franz Ferdinand in Sarajevo. Realising that the news has been withheld from him, the King erupts in fury. Unnoticed by the adults, Johnnie pursues Charlotte, as the terrified bird flies away into the bowels of the building. The Queen, Lalla and George go searching for Johnnie and his mother is shocked when she sees, for the first time, one of Johnnie's debilitating fits. In the midst of scurrying officials gathering for urgent diplomatic meetings, Johnnie is secreted away from the Palace and back to the isolation of Sandringham.

Episode Two Prince George witnesses the brinkmanship of the Allies in the face of the belligerent posture taken by the Central Powers, led by Germany. Much to the surprise of all concerned, the weak and vacillating Tsar Nicholas of Russia mobilises his troops and plunges Europe into a world war. Against his wishes, George is sent to the harsh Naval College where his rebellious nature leads him to question propaganda about the cruelty of the German armed forces.

Such propaganda, combined with the disastrous consequences of the conflict on the battlefields of Flanders and France, turns the public's attention to the German ancestry of the British royal family. The trauma of war is even felt by Johnnie, Lalla and their household, who are forced to live in increased isolation in Wood Farm, on the fringes of the Sandringham estate. Prince George is determined to maintain contact with Lalla and his brother. He arrives to relay the news that the family is to change its name to Windsor, and that the Tsar of Russia has abdicated and is to be exiled to Britain by the Bolshevik revolutionaries.

George is alarmed at the reaction of his own subjects and persuades Stamfordham to press Lloyd George, who is now Prime Minister, to rescind the invitation to the Tsar. Johnnie dreams innocently of his Russian cousins coming to live with him and is being prepared by Lalla to give a recital to his parents. King George and Queen Mary are traumatised by what follows – the execution of the Romanovs. Weighed down by the effects of the conflagration that has enveloped Europe, they find consolation when their son Johnnie dies in his unbounded optimism and unalloyed love of life.

The drama achieved a high viewing figure and much praise, was released on VHS and DVD, and was repeated on BBC One in January 2004. [5] 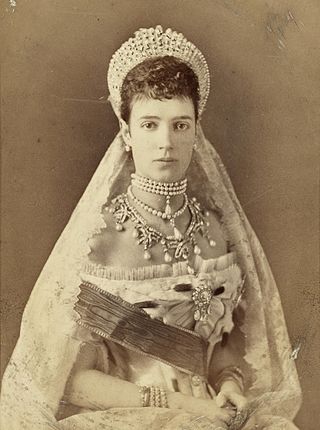 Maria Feodorovna, known before her marriage as Princess Dagmar of Denmark, was Empress of Russia from 1881 to 1894 as spouse of Emperor Alexander III. She was the second daughter of Christian IX of Denmark and Louise of Hesse-Kassel. Maria's eldest son became the last Russian monarch, Emperor Nicholas II. Maria lived for 10 years after Bolshevik functionaries killed Nicholas and his immediate family in 1918. 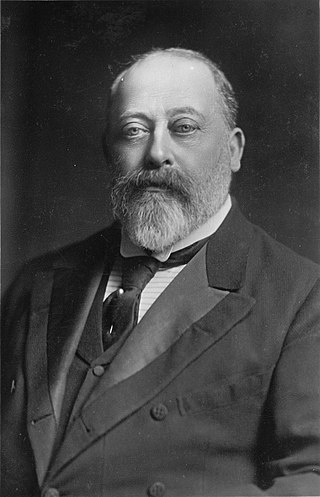 Edward VII was King of the United Kingdom of Great Britain and Ireland and Emperor of India, from 22 January 1901 until his death in 1910. 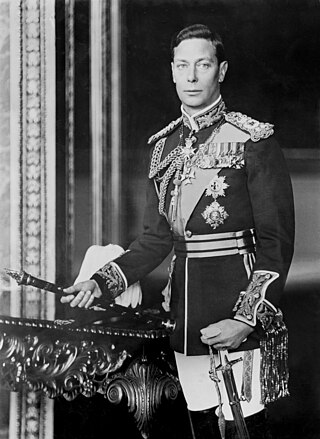 George VI was King of the United Kingdom and the Dominions of the British Commonwealth from 11 December 1936 until his death in 1952. He was concurrently the last Emperor of India until August 1947, when the British Raj was dissolved. 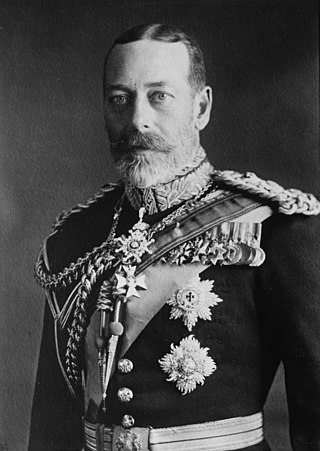 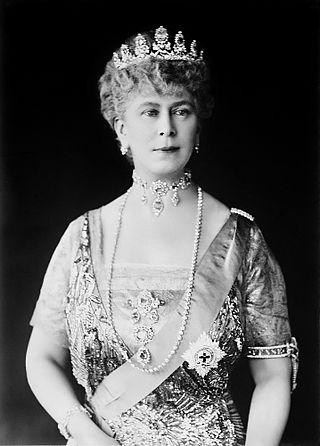 Mary of Teck was Queen of the United Kingdom and the British Dominions, and Empress of India, from 6 May 1910 until 20 January 1936 as the wife of King-Emperor George V.

Alexandra of Denmark was Queen of the United Kingdom and the British Dominions, and Empress of India, from 22 January 1901 to 6 May 1910 as the wife of King-Emperor Edward VII. 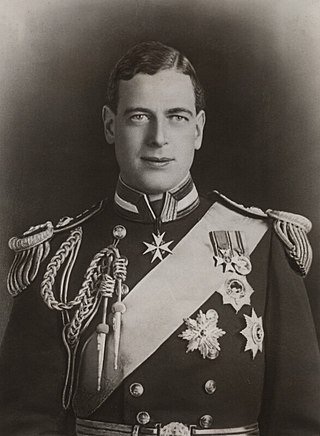 Prince George, Duke of Kent, was a member of the British royal family, the fourth son of King George V and Queen Mary. He was a younger brother of kings Edward VIII and George VI. Prince John was the fifth son and youngest of the six children of King George V and Queen Mary. At the time of his birth, his father was heir apparent to the reigning monarch of the United Kingdom, King Edward VII. In 1910, the Prince of Wales succeeded to the throne upon Edward VII's death and Prince John became fifth in the line of succession to the British throne. 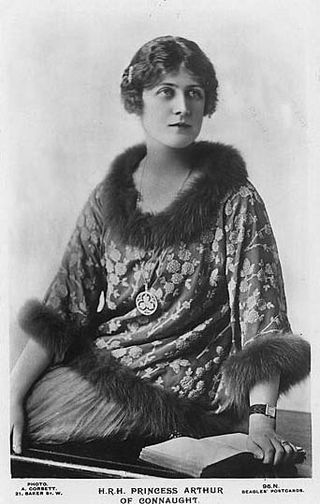 Princess Alexandra, Duchess of Fife,, known as Princess Arthur of Connaught after her marriage, was the eldest surviving grandchild of King Edward VII. Alexandra and her younger sister, Maud, had the distinction of being the only female-line descendants of a British sovereign officially granted both the title of Princess and the style of Highness. 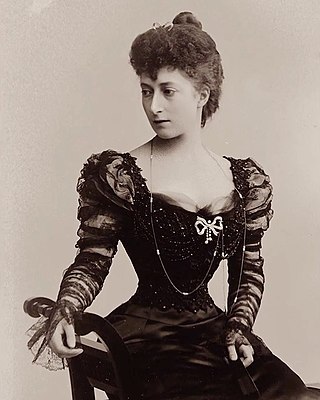 Maud of Wales was the Queen of Norway as the wife of King Haakon VII. The youngest daughter of King Edward VII and Queen Alexandra of the United Kingdom, she was known as Princess Maud of Wales before her marriage, as her father was the Prince of Wales at the time. 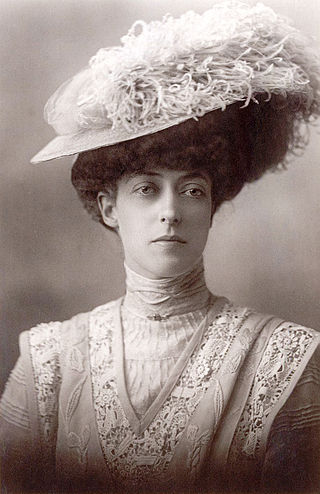 Princess Victoria of the United Kingdom was the fourth child and second daughter of King Edward VII and Queen Alexandra, and the younger sister of King George V.

Stephen Poliakoff is a British playwright, director and screenwriter. In 2006 Gerard Gilbert of The Independent described him as the UK's "pre-eminent TV dramatist" who had "inherited Dennis Potter's crown". 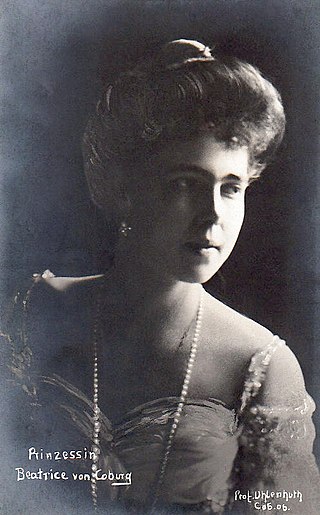 Princess Beatrice Leopoldine Victoria of Saxe-Coburg and Gotha was a member of the British royal family, a male-line granddaughter of Queen Victoria. She later married into the Spanish royal family, and was the wife of Prince Alfonso de Orleans y Borbón, Infante of Spain, a first cousin of Alfonso XIII of Spain.

Sandringham House is a country house in the parish of Sandringham, Norfolk, England. It is one of the royal residences of Charles III, whose grandfather, George VI, and great-grandfather, George V, both died there. The house stands in a 20,000-acre (8,100 ha) estate in the Norfolk Coast Area of Outstanding Natural Beauty. The house is listed as Grade II* and the landscaped gardens, park and woodlands are on the National Register of Historic Parks and Gardens. 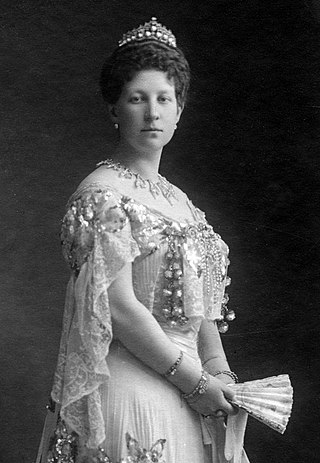 Wood Farm is a secluded farmhouse cottage property set on the British Royal Family's Sandringham Estate in Norfolk, England. Historically occupied by members of the Royal Family and their guests, the house was a long favourite of Elizabeth II. From his retirement in 2017, the house was home to Prince Philip, Duke of Edinburgh. 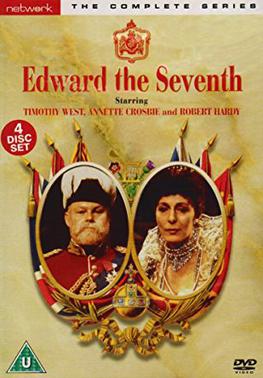 Edward the Seventh is a 1975 British television drama series, made by ATV in 13 episodes. 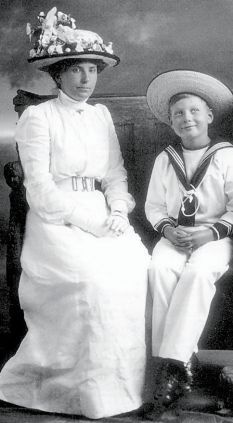 Charlotte Jane "Lala" Bill was an English nanny to the children of the Duke and Duchess of York, later King George V and Queen Mary. She was most closely involved with the couple's youngest child, Prince John, whom she nursed devotedly from 1905 until his death in 1919. 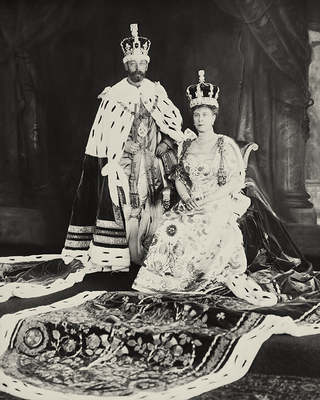 The coronation of George V and his wife Mary as King and Queen of the United Kingdom and the British Dominions, and as Emperor and Empress of India, took place at Westminster Abbey, London, on Thursday 22 June 1911. This was the second of four such events held during the 20th century and the last to be attended by royal representatives of the great continental European empires. 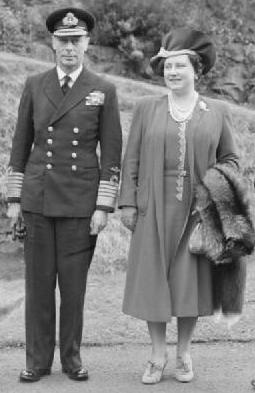 The state funeral of George VI, King of the United Kingdom of Great Britain and Northern Ireland, took place on 15 February 1952. George VI died in the early morning of 6 February at Sandringham House in Norfolk. A period of national mourning commenced and his elder daughter and successor, Queen Elizabeth II was proclaimed the new monarch by the Accession Council. George VI's coffin lay in St Mary Magdalene Church, Sandringham until 11 February when it was carried, in procession, to the nearby Wolferton railway station. The coffin was carried by train to London King's Cross railway station where another formal procession carried it to Westminster Hall where the king lay in state for three days. Some 304,000 people passed through Westminster Hall with queues up to 4 miles (6.4 km) forming.