The Man of Destiny

Last updated May 31, 2021
For the Australian television version of this play, see Man of Destiny (film).
Play by George Bernard Shaw

The Man of Destiny is an 1897 play by George Bernard Shaw, set in Italy during the early career of Napoleon. It was published as a part of Plays Pleasant, which also included Arms and the Man , Candida and You Never Can Tell. Shaw titled the volume Plays Pleasant in order to contrast it with his first book of plays, Plays Unpleasant.

12 May 1796, an inn at Tavazzano. After his victory at the Battle of Lodi, Napoleon eats his meal, works on his plans and talks with the innkeeper Giuseppe Grandi. A lieutenant arrives with bad news. The dispatches he was carrying have been stolen by a youth who tricked him out of them. Napoleon says he will be arrested for dereliction of duty. The lieutenant says he can hear the voice of the youth who tricked him. A woman appears. She says that the dispatches were stolen by her brother. Napoleon is unconvinced. He orders the lieutenant out and tells the woman to hand over the dispatches. A battle of wits ensues between Napoleon and the woman, but she eventually concedes and hands over the documents. However she says he should not read one of the documents. It is a letter claiming that Napoleon's wife Josephine has been having an affair with Paul Barras. If he is known to have read the letter it will cause a duel. Napoleon, concerned about a public scandal, decides to pretend that the dispatches are still missing. He calls the lieutenant back, and tells him to go and find the missing documents or be court martialed. To save the lieutenant from disgrace, the lady leaves and switches to her male disguise. As soon as she reappears the lieutenant recognises the "brother" who robbed him. Pretending to have magical powers, she finds the dispatches in Napoleon's coat. Napoleon says he's been outwitted by an Englishwoman, and makes a series of comments about the English ability to constantly have things both ways ("As the great champion of freedom and national independence, he conquers and annexes half the world, and calls it Colonization"). He gives the woman the letter unopened; she burns it.

The play was written for Ellen Terry and Richard Mansfield, but was first performed, on 1 July 1897, at the Grand theatre, Croydon with Murray Carson and Florence West in the principal roles. [1] The play was the first Shaw work performed in the German language when it was given in a translation by Siegfried Trebitsch at the Schauspielhaus in Frankfurt on 20 April 1903. On 28 March 1928, the play had its first radio broadcast with Esme Percy as Napoleon.

An American television version was broadcast on 21 November 1973, [5] with Stacy Keach as Bonaparte and Samantha Eggar as The Lady.

A radio production directed by Pat Trueman was broadcast on BBC Radio 4 on 8 May 1980, [6] with David Suchet as Napoleon and Paola Dionisotti as The Lady.

A BBC TV version was broadcast on 5 May 1981, [7] with Simon Callow as Napoleon, Delphine Seyrig as The Lady and David Troughton as The Lieutenant.

She Stoops to Conquer is a comedy by Oliver Goldsmith, first performed in London in 1773. The play is a favourite for study by English literature and theatre classes in the English-speaking world. It is one of the few plays from the 18th century to have retained its appeal and is regularly performed. The play has been adapted into a film several times, including in 1914 and 1923. Initially the play was titled Mistakes of a Night and the events within the play take place in one long night. In 1778, John O'Keeffe wrote a loose sequel, Tony Lumpkin in Town.

A Woman of No Importance by Oscar Wilde is "a new and original play of modern life", in four acts, first given on 19 April 1893 at the Haymarket Theatre, London. Like Wilde's other society plays, it satirises English upper-class society. It has been revived from time to time since his death in 1900, but has been widely regarded as the least successful of his four drawing room plays.

"The Adventure of the Second Stain", one of the 56 Sherlock Holmes short stories written by Sir Arthur Conan Doyle, is one of 13 stories in the cycle collected as The Return of Sherlock Holmes (1905) and the only unrecorded case mentioned passively by Watson to be written. It was first published in The Strand Magazine in the United Kingdom in December 1904, and was also published in Collier's in the United States on 28 January 1905. Doyle ranked "The Adventure of the Second Stain" eighth in his list of his twelve favourite Holmes stories. 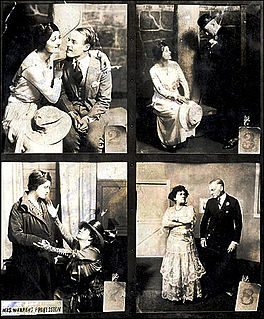 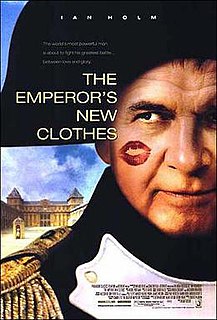 The Emperor's New Clothes is a 2001 British historical drama film that was adapted from Simon Leys' novel The Death of Napoleon. Directed by Alan Taylor, the film stars Ian Holm as Napoleon and Eugene Lenormand, a Napoleon look-alike, Iben Hjejle as Nicole 'Pumpkin' Truchaut and Tim McInnerny as Dr Lambert. The plot re-invents the (secret) history surrounding Napoleon Bonaparte's exile to Saint Helena following his defeat at Waterloo.

No Wit, No Help Like a Woman's is a Jacobean tragicomic play by Thomas Middleton.

The Lady with a Fan is a major oil painting by the Spanish court painter Diego Velázquez. It depicts a woman wearing a black lace veil on her head and a dark dress with a low-cut bodice. On the basis of its place in Velázquez's stylistic development, the portrait is thought to have been painted between 1638 and 1639. It is now in the Wallace Collection in London.

The Dark Lady of the Sonnets is a 1910 short comedy by George Bernard Shaw in which William Shakespeare, intending to meet the "Dark Lady", accidentally encounters Queen Elizabeth I and attempts to persuade her to create a national theatre. The play was written as part of a campaign to create a "Shakespeare National Theatre" by 1916. 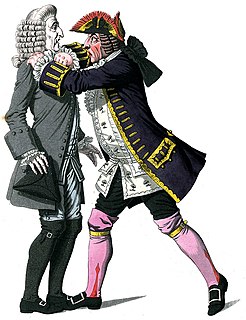 L'irato, ou L'emporté is an opéra-comique in one act by the French composer Étienne Méhul with a French-language libretto by Benoît-Joseph Marsollier. It was first performed at the Théâtre Favart in Paris on 17 February 1801. Written in a lighter style than Méhul's operas of the 1790s, L'irato is famous for being part of a deception the composer played on his friend Napoleon Bonaparte.

Man of Destiny is a 1963 Australian television play directed by Christopher Muir. It was based on the 1897 play Man of Destiny by George Bernard Shaw. Just like the play it revolves around the early career of Napoleon Bonaparte.