The Moon and the Nightspirit

The Moon and the Nightspirit is a Hungarian folk music duo founded in 2003 by Ágnes Tóth and Mihály Szabó. Their songs deal mostly with pagan fairy tales and shamanism.

The lyrics of their debut album Of Dreams Forgotten and Fables Untold were mostly held in English while it also featured two titles in Hungarian language. The softly melancholic album has been compared to the music of Ataraxia and Chandeen. [1] Live performances with songs from the album included an appearance on Hungarian National Television. [2]

The second album Regő Rejtem (lit.: I conjure Magic) was released in 2007 and is completely sung in Hungarian. [3] During the supporting tour through much of Europe The Moon and the Nightspirit played on festivals such as Wave-Gotik-Treffen (Germany) and Castle Party (Poland). [2]

In 2009 the band released their third album Ősforrás, a more facetted work that focuses on the "wise elder" and natural mysticism. [4] It has been compared to the Pagan folk of Omnia but was said to be more transparent for the listener. [5] The Side-Line magazine called it the band's most diversified and accomplished album so far. [6]

The Moon and the Nightspirit have received favourable ratings by reviewers. Their style has been called slightly oriental [4] as well as a mix of medieval music and Hungarian folk songs, [6] [7] while Ágnes Tóth's singing has been compared to Elisabeth Toriser of Dargaard. [8] They are also acclaimed for being multi-instrumentalists using such traditional instruments as the Mongolian morin khuur and the Slovak shepherds pipe fujara. [4]

Medieval metal is a subgenre of folk metal that blends heavy metal music with medieval folk music. Medieval metal is mostly restricted to Germany where it is known as Mittelalter-Metal or Mittelalter-Rock. The genre emerged from the middle of the 1990s with contributions from Subway to Sally, In Extremo and Schandmaul. The style is characterised by the prominent use of a wide variety of traditional folk and medieval instruments.

Pagan rock is a genre of rock music created by adherents of neopagan traditions. It emerged as a distinct genre from gothic rock in the 1980s. Bands in this genre will often use pagan and occult imagery and deal with pagan themes. In some cases the definition is stretched to include rock bands embraced by modern Pagans.

Omnia is a self-described "neoceltic pagan folk" band based in the Netherlands, whose members over the years have had Irish, Dutch, Cornish, Belgian, Indonesian, and Persian backgrounds. Their music takes the form of various cultural routes, from places such as Ireland, England, Cornwall, and Iran. The name of the band is a Latin word that means "everything".

Faun is a German band that was formed in 1998 and plays pagan folk, darkwave, and medieval music. The originality of their music style is that it falls back to "old" instruments, and the singing is always the center of attention. The vocals are performed in a variety of languages, including German, English, Latin, Greek, and Scandinavian languages. Their instruments include Celtic harp, Swedish nyckelharpa, hurdy-gurdy, bagpipes, cittern, flutes, and many others.

Vo Slavu Velikim! is the third full-length album by the Russian folk metal band Arkona. It was released on September 24, 2005 through Sound Age Production. It was re-released in 2008 by Vic Records.

Tales of Ithiria is the fourth studio album by the German symphonic metal band Haggard. Previously known under its work title A Dark Winter's Tale, this album breaks the band's habit of writing about historical characters and events. Instead, it tells a fictional, medieval-themed story written by Haggard's songwriter Asis Nasseri. The album includes a cover version of the song "Hijo de la Luna", originally written by José María Cano and performed by his own band, Spanish Pop group Mecano. However, his authorship of the song is not acknowledged in the CD's booklet, instead being referred to as "Traditional" music and lyrics.

Forgotten Sunrise is an Estonian industrial/deathbeat band founded in Tallinn, the capital of Estonia. Their sound has been compared to a mixture of Dead Can Dance, David Lynch, Katatonia, Celtic Frost and Clock DVA.

Lyriel are a German heavy metal band who formed in autumn of 2003 in Gummersbach. Originally playing folk metal, they turned more towards symphonic and gothic metal. Lyriel has recorded five studio albums and published a DVD of a live performance. 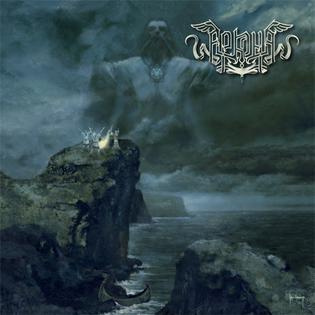 Goi, Rode, Goi! is the fifth full-length album by the Russian pagan metal band Arkona. It was released on October 28, 2009 through Napalm Records. "Goy, Rode, Goy!" means "Hail, Rod, Hail!". Rod is the Slavic Great God, Father of the Universe.

Mandrake is a German gothic metal band from Emden, Ostfriesland, formed by Lutz de Putter in 1996.

Traumtänzer is the seventh studio album by the German Medieval folk rock band Schandmaul. It was released on 28. January 2011 on CD, double vinyl record, and as extended edition.

Cesair is a Dutch band formed in 2008 who make pagan folk, world fusion and world music. They are the main representatives of the pagan folk music scene in the Netherlands, alongside pagan folk band Omnia. The band refer to their genre as "Epic Folk & Mythic Music". They perform on a variety of modern and traditional instruments, including accordion, hurdy-gurdy, hammered dulcimer, Irish bouzouki, violin, cello, bodhrán and many others. Their songs are performed in a variety of languages ranging from Arabic, medieval Celtic languages, English, Latin, Greek, to Middle Dutch, Old Norse and more.

Friendly Folk Records is an independent record label based in Rotterdam, Netherlands, founded in 2017 by music journalist and entrepreneur Kathy Keller. The early label roster represented mostly 'up and coming' folk artists from various genres, including Celtic Folk, Traditional Folk, Pagan Folk, and singer-songwriters. Friendly Folk Records is the sponsor and host of Friendly Folk Stage at Fantasy Fest Rijswijk every March and October.