The Most Excellent (Spanish: Excelentísimo Señor (male) or Excelentísima Señora (female), literally "Excellent Sir/Mister") is an honorific prefix that is traditionally applied to certain people in Spain and certain Spanish-speaking countries. Following Spanish tradition, it is an ex officio style (the holder has it as long as they remain in office, in the most important positions of state) and is used in written documents and very formal occasions.

The prefix is similar (but not equal) to that of "His/Her Excellency", but in the 19th century "The Most Excellent" began to replace the former.

The proper use of the prefix Excellency was re-introduced in Francoist Spain by Generalísimo Francisco Franco himself, who was formally styled as Su Excelencia el Jefe del Estado ("His Excellency The Head of State"), while his ministers and senior government officials continued using the prefix "The Most Excellent".

The prefix "The Most Illustrious" (Ilustrísimo/a Señor/a) is the lower version, and is mostly used for non-Grandee titled nobles in Spain and some other officeholders.

In the Kingdom of Spain

The following State and Government officials receive the style "The Most Excellent":

Household of His Majesty The King

The Style of "His Excellency" in Spain

The style "His Excellency", which has a higher connotation than "The Most Excellent", is instead reserved for the children of an Infante or Infanta, who have the have the rank (but not the title) of Grandees. [2]

During Francoist Spain, General Francisco Franco was the de facto Dictator of Spain and properly adopted the style His Excellency, since he was both Chief of State and Government, without being a "royal".

Following the tradition from Spain, Hispanic countries adopted the styles "His Excellency" and "The Most Excellent" although they are informally used most of the time without following rules of style.

Properly used, the style "His Excellency" (or simply "Excellency") is reserved for Chiefs of State and/or Government in Republics, i.e. the President and Vice-President of the Republic. Also, though informally, this style applies for the "President of Congress" (or equivalent) and the "President of the Supreme Courts" (or equivalent). Former Presidents and Vice-Presidents of Republics usually retain the style "His/Her Excellency" after finishing their terms, as an honorific.

The style "The Most Excellent" (Excelentísimo Señor/a) applies to high-ranking officials of Republican countries that are not Chiefs of State or Government, i.e. a Minister, a Governor, an elected official.

Ambassadors of Foreign Countries also receive the style "The Most Excellent", although informally they are addressed as "Excellency".

In other countries, "His Excellency" and "The Most Excellent" are rarely used.

In the United States, albeit rarely, the President of the Nation is styled "Excellency". The more British-style "The Honourable" is preferred for Senators, Representatives and other elected officials.

In European monarchies or former monarchies, the style "His Excellency" is rarely used. "The Most Excellent" is sometimes given to members of the minor nobility, i.e. Counts, Viscounts and/or Barons.

The politics of Spain takes place under the framework established by the Constitution of 1978. Spain is established as a social and democratic sovereign country wherein the national sovereignty is vested in the people, from which the powers of the state emanate.

Excellency is an honorific style given to certain high-level officers of a sovereign state, officials of an international organization, or members of an aristocracy. Once entitled to the title "Excellency", the holder usually retains the right to that courtesy throughout their lifetime, although in some cases the title is attached to a particular office, and is held only for the duration of that office.

The Malay language has a complex system of styles, titles and honorifics, which are used extensively in Brunei and Malaysia. 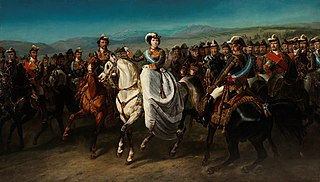 Grandee is an official aristocratic title conferred on some Spanish nobility and Portuguese nobility. Holders of this dignity enjoyed similar privileges to those of the peerage of France during the Ancien Régime, but unlike in Great Britain, they were not organised into political groupings. "Grandee of Spain" is the highest dignity of nobility in all of Europe, due to its privileges having been greater than those of other similar European dignities, such as the peers of France or the peers of Great Britain. All Dukedoms are automatically attached to a Grandeeship yet only a few Marquessates, Countships, Viscountcies, Baronies and Lordships have the distinction. A single person can be a Grandee of Spain multiple times, as Grandeeships are attached, with the exception of a few cases, to a title and not an individual. Consequently, nobles in Spain with more than one title, most notably the Duchess of Medinaceli and the Duke of Alba, are Grandees 10 and 9 times respectively.

The Spanish order of precedence is currently prescribed by Royal Decree 2099/1983. The decree establishes the order of precedence of national official activities as well as common regulations to activities organised by municipalities, autonomous communities and other public institutions. The general order established by the decree is modified if the event takes place in the capital, Madrid, instead of elsewhere in Spain.

The National Anticorruption Directorate, formerly National Anticorruption Prosecution Office, is the Romanian agency tasked with preventing, investigating and prosecuting corruption-related offenses that caused a material damage to the Romanian state. The institution deals with the fight against high corruption offences, which have caused damage greater than €200,000 or if the object of the crime is property or sums of money amounting to over €10,000. 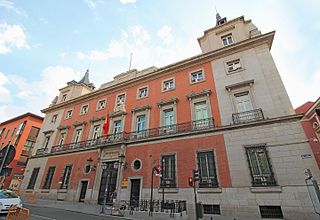 The Ministry of Justice (MJUS) is the department of the Government of Spain responsible for preparing and carrying out the government policy in order to bring the legal system off, specially in criminal, civil, commercial and procedural law affairs, supporting the Administration of Justice, the legal and international cooperation, guaranteeing the fundamental right of freedom of worship and the matters related with the Historical Memory Act.

Belgian order of precedence is the formal ranking used at the Royal court during acts of state. Because both EU, SHAPE and Nato are in Belgium, this list is used every year during formal receptions at court.

The Spanish Attorney General, officially, Attorney General of the State(Spanish: Fiscal General del Estado), is the head of the Prosecution Ministry, the body with functional autonomy in the Judiciary, that has constitutionally been entrusted with the promotion of the action of the justice in defense of the legality, protecting citizens rights and the public interest, and ensuring the independence of the courts and to seek the satisfaction of the social interest.